On the 8th August 2019, Krishna River itself and several of its tributaries in Maharashtra as well as Karnataka crossed their Highest Flood Levels at multiple places to set new records. Nowhere is it more stark than in Gokak Falls on the River Ghataprabha in Belgaum District of Karnataka. At Gokak Falls, the Highest Flood Level of the river was more than 553 meters and exceeded the earlier record by more than 5 meters! (For More Details: https://sandrp.in/2019/08/12/krishna-basin-floods-in-karnataka-the-role-of-dams/)

Abhay Kanvinde visited Gokak Falls, Hidkal Dam and villages along the Ghataprabha and Hiranyakeshi Rivers in Karnataka to understand and photo-document the impact of raging water levels on communities and ecosystems. Some interesting facts were thrown up in this trip. Mainly that 2019 Flood levels exceeded not only the 2005 and 2006 levels, but even the historic 1914 Flood levels, which are carefully marked by the British at Gokak Hydropower Station.

Management of Hidkal and Dudpal Dams, part of the Ghataprabha Irrigation project upstream of Gokak Falls has played a major role in increasing the extent of floods and damages. Hidkal Dam was already 96% full on the 6th of August, when Monsoon was not even half way through. This entirely violated the Rule Curve of the dam as well as Karnataka Government’s Reservoir Operation Guidelines of Hidkal Dam. This led to a situation where dam releases coincided with excessive rainfall in the region, adding massive amounts of water in the river channel below, destroying several settlements, home and fields along the Ghataprabha.

A look at the aftermath of an epic flood: parts natural, part man-made.

Abhay talks with a worker from one of the oldest Hydropower plants in the country, the 3.5 MW Gokak Hydroelectric Project set up by the British in 1887 to supply power to Forbes Gokak Spinning Mill, now Gokak Textiles. The plant still supplies power to the mill and is situated right at the foot of the Gokak Falls. In 1914, the British painstakingly marked the highest flood level reached at the plant. This level was never exceeded, even by the 2005 floods. But as the worker explains, 2019 Flood level was at least 4 feet above 1914 levels. 2019 levels were higher at least than 105-year flood levels! (Video: Abhay Kanvinde) 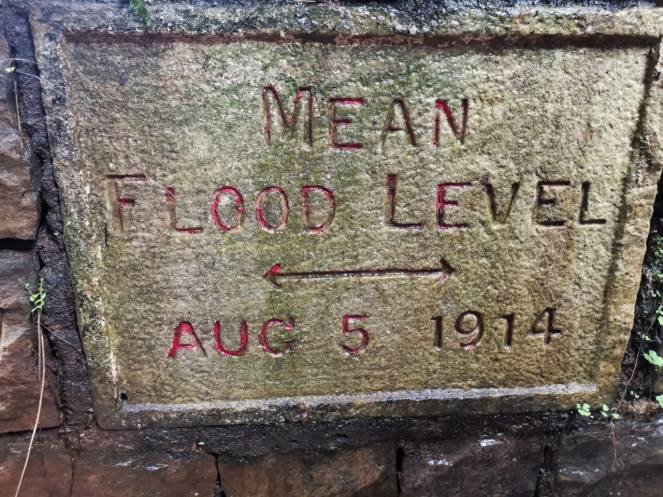 Mr. Santosh from Mahalingeshwar Temple at Gokak Falls shows the water levels and what they did Video: Abhay Kanvinde

NOTE: For the other three photo blogs in this series, see: