During the night of June 20, 2020 pre-monsoon showers left series of gully formations on one of the muck dump sites of the under construction 120 MW Vyasi Hydro Electric Project (HEP) in Hathiyari area of Vikas Nagar tehsil, Dehradun district in Uttarakhand. Huge amount of muck washed down into Yamuna River, exposing the credibility of the Uttarakhand Jal Vidyut Nigam Ltd. (UJVNL), the developer of Vyasi HEP.

Local people said that since June 2019, the UJVNL has spent over Rs. 40 lakh on geo jute and hydro seeding (grass slope protection) work at Hathiyari muck dumping yard. The project has already missed several deadlines, the work is far from complete. The careless handling of muck generated during the construction of 2.7 km long, 7-m dia tunnel in last eight years has added -+to the woes of local people and Yamuna river.

Muck dumping site on Riverbed in violation of norms There are three muck dump sites at the project site: one at Juddo close to dam and the two at power station near Hathiyari right on in the riverbed! Since the beginning, the local people have been questioning selection of muck dump sites but the objections have been ignored by the UJVNL. In reality, this siting of the muck dumping site on the river bed is in complete violation of the norms.

The MoEF’s Expert Appraisal Committee on River Valley Projects prescribed norms for the location of muck disposal site, say, for example: “Muck disposal sites are to be selected such that the outer edge of the muck retaining structure at its base is at least 30-50 m horizontal distance away from the river bed at HFL”. It is clear that the muck disposal site of the Vyasi HEP is in complete violation of the norms, as SANDRP also wrote in 2019[i].

“The muck dumping site at Hathiyari has long exceeded its capacity, despite that UJVNL kept dumping more and more muck at the site resulting in present day situation”, says Praveen Tomar, a local youth who has been raising the issue of muck dumping and excessive mining in river Yamuna.

With completion of tunnel work now no fresh muck is being dumped. However the already piled up muck have become a source of perennial problems.

“The dumps are so close to the river that over time, large amounts have already spilled and washed into the river. Retaining wall, wire crate (gabion box) wall have become a ritualistic work primarily just before the monsoon season but nothing has worked so far”, laments Dhyan Singh a local physician living very close to muck dump at Hathiyari.

This was deliberate tactic of developer to dispose away muck cheaply by letting it keep falling in river to save on the transportation cost to safe location, local people say. 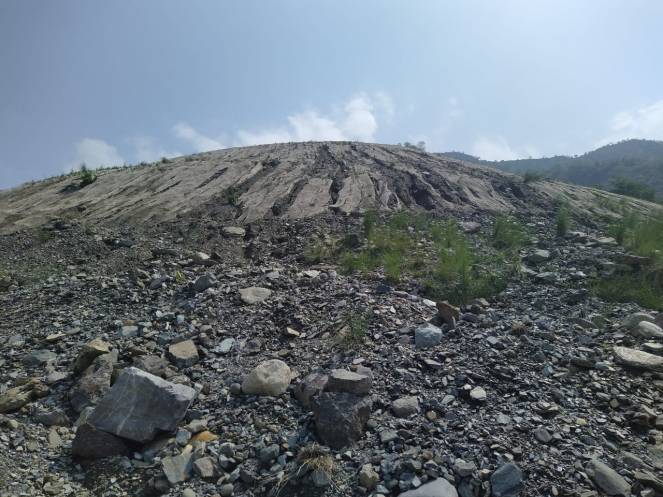 June 21, 2020 images shared by locals show how improper geo jutting work of Vyasi HEP by UJVNL has failed to stop muck over spill at Hathiyari.

Waste of public resources, destruction of river “In April 2019, a team of experts has visited the Lakhwar dam site en-route Vyasi HEP. Just before the visit developer swung into action and tried to cover up the dumps by hastily creating protection wall to control the overspill but the effort failed and muck flowed into the river during monsoon”, shares Yashpal Thakur a native of nearby Katapathar village.

Thakur further adds that for long muck spilling issue has become regular event. First people raise the issue, then developer engages a few selected persons through small contracts to silence everyone, till spill event unfolding again, with no permanent solution in sight.

“During rains the muck drains into river from top and the floods keep eroding its bottom increasing sediment load in the river and affecting the water quality & biodiversity”, reveals Sandeep Chauthan another local youth from Katapathar. Chauthan fears that it could invite bigger disaster. He says, the bio jutting and hydro seeding work has not been done properly. As a result the recent rains washed it away. 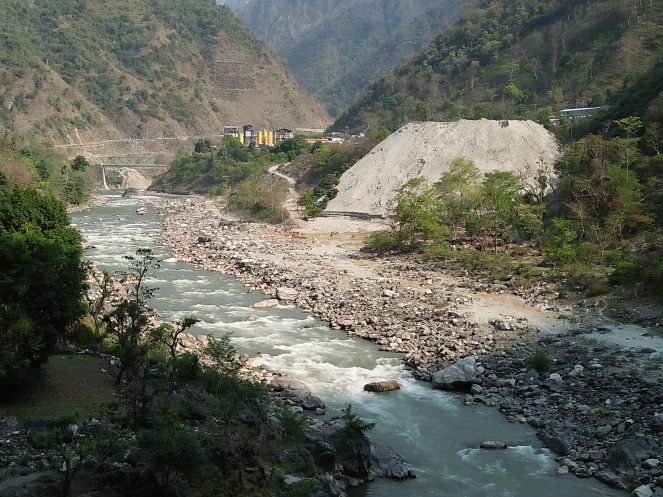 Muck dumped at Vyasi HEP Juddo. The colour of river water changes significantly due to huge amount of silt being dumped and washed into the river by stone crushers and project developer. (SANDRP, 20 April 2019)