Finally on World Environment Day, Swami Shivanand has withdrawn[I] his fast unto death agitation. It was thirteenth day of his indefinite hunger strike including six days of water fast (from May 25 – 30, 2017) against illegal mining in Ganga.

The saint ended his protest around 6pm on June 05, 2017, only after receiving written assurance from the Central Government. As per information, referring to Matri Sandan repeated pleas, UP Singh Director General of National Mission for Clean Ganga has accepted that there were violations[II] of rules specially Rule No. V of Environment Protection Act during mining in Ganga. Subsequently he has asked Chairman, Central Pollution Control Board initiate criminal proceedings against the officials[III] concerned for non-compliance of the rules.

A Description of Matri Sadan Agitation

Since May 25, 2017, the head of Matri Sadan[IV]  was sitting on fast against indiscriminate illegal mining of sand and stones from the Ganga River. The 70 years lean swami ji has even shunned water from the very next day of his agitation.

Before this, one other disciple of the Ashram, Brahmachaya Atmabodhanand ended his Satyagraha on May 25, 2017 after twelve days. In past too, the Swami Shivanand has sat on fast many a times protesting against mining of the Ganga River.

On May 28, 2017 the District Administration and police team invaded[V] the ashram premise to evict the saint and end the fast by forceful feeding but the attempt was unsuccessful. On Swami ji’s current fast without water entering its sixth day, the state govt came under pressure. The Uttarakhand Chief Minister tried to persuade him to give up agitation.

Given the overwhelming support to the movement, the State government has stopped Ganga riverbed mining for the time being, the CM told Swami ji. In response, Swami Shivanandalso started taking water but decided to continue fast unless State Government imposes a complete ban on mining in Ganga river in Haridwar.

Amid growing concerns over saint health, on June, 01, 2017 several environmentalist and activists have written to Prime Minister[VI]to intervene without delay to stop unscientific mining of the Ganga. Further on June, 04, 2017 prominent environmentalists have slammed[VII] the state govt for allowing mining in the Ganga at Haridwar despite scientific evidence proving that this was harming the river.

What is Matri Sadan Stand: Swami Shivanand is firm on his demands and whole heartedly fighting for Ganga cause. But his followers were worrying that his aging body cannot afford prolonged fasting and apprehended that the saint might end up losing his life in coming days if he continues on hunger strike.

Throughout 2015-16, the saint kept fighting to stop unsustainable Ganga riverbed mining. There were agitations and protest during June 2015[VIII], January 2016[IX] and November 2016[X] launched by Matri Sadan.

In fact, for over a decade, Matri Sadan has been fighting hard to keep mining mafia at bay and preventing Government from having its way when it comes to Ganga riverbed mining around the town of Haridwar.

In 2011, Late Swami Nigmanand a young saint of the Ashram had died under mysterious circumstances[XI] while protesting against the mining in Ganga. Nigmanand ji took his last breath in June 2011, after 115 days long fast. Many believed that he was poisoned to death during his forcible treatment in Jolly Grant Hospital, Dehradun.

Uttarakhand Government Stand The State Government considers mining of minerals among the few revenue sources, and maintains that it is crucial for the growth of the State.In the process, it has put Ganga river and forests at stake.

Since the formation of State in 2000, the successive Government has been trying ways to get best deal out of Jal, Jungle and Zameen (Water, Forest and Land) the natural resources of the state. Mining of riverbed minerals including boulders, gravels, stones, sand by itself or through contractors for commercial profits has become a trend in the state.

In past, the state has expressed disappointment over judicial intervention putting curbs on large scale mining. Very recently, opposing Nainital High Court mining ban, it has appealed in the Supreme Court of India. The apex court, in response has stayed[XII] the State High Court order.

How Mining in Haridwar Is Impacting Ganga The mighty Ganga slows down while winding through Shivalik hills and entering into Gangetic plains. It is this point, the river starts depositing transported minerals like silt, sediments, sand, gravels and boulders on the riverbed. Experts feel that this very ecological function of the Ganga has been severely compromised after construction of numbers of dams and barrages upstream of Haridwar. They also fear that this fact may subsequently have impacted replenishing capacity of the river. On the other hand, sand and stones are being mined at large scale indiscriminately from riverbed to meet demand of rapidly growing Haridwar and Rishikesh towns. 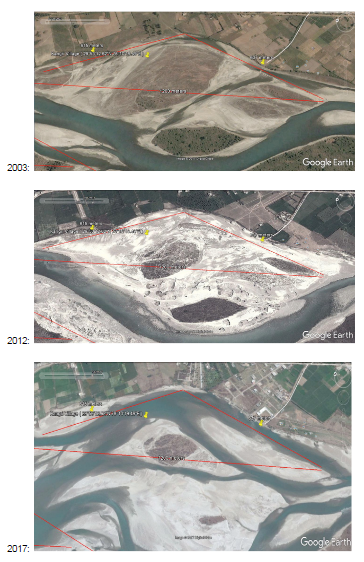 Deadlock between Matri Sadan and State Government At the centre of this whole issue, lie the two different approaches on Ganga riverbed mining. The State Government claims that boulders and other materials flown down during annual floods particularly post 2013 floods, have raised the riverbed hence its necessary to mine the River Bed Material (RBM) out to increase the flood retaining capacity of the Ganga river and protect Haridwar from the threat of annual floods.

The Matri Sadan differs from the Government view.  Referring to a handful of studies and documents[XIII] it argues that boulders and other heavy minerals are trapped inside Tehri dam, Tehri Garhwal, Pushlok Barrage, Rishikesh and Bhim Goda Barrage, Haridwar and hence excavation of Ganga riverbed in the name of RBM is erroneous and disastrous. The holy men see a scam behind RBM theory. The Ashram is fighting against large scale illegal mining in the national river.

What Is Judiciary Doing The issue has attracted judicial attention on many occasions.  The National Green Tribunal in April 2015 had imposed a ban[XIV] on illegal mining in the river. In December 2015 the green tribunal, in a comprehensive judgment[XV] restricted use of machines in the riverbed for mining.

Further, the Nainital High Court in March 2017 prohibited[XVI] on Ganga riverbed mining across the state. Days before this, the HC in its historic decision[XVII] had declared the Ganga and Yamuna as living entities. That decision also dealt with the mining issue. Later the State Government has approached Supreme Court against the both judgments and has managed to secure a stay against mining ban[XVIII] order.

What is the Central Government stand Sand and stones listed as minor minerals are under State Government’s jurisdiction. Centre, on its part, it has formed Sustainable Sand Mining Practices Guidelines 2016[XIX]. The guideline asks for formation of block level committees and District Environment Impact Assessment Authority to look into the environmental issues and irregularities while granting permission to mining proposals. These committees are either unformed or remain ineffective.

Following Matri Sadan plea, a team of Ministry of Environment and Forest on May 02, 2016 visited Ganga river mining sites in Haridwar. Reinforcing Marti Sadan claim, the inspection report of the visit mentioned that big boulders were not seen around Bhim Goda barrage and deep pits were dug in riverbed in violation of rules. The report suggested prohibiting mining activities[XX] unless a replenishment study of river Ganga is conducted.

Taking notice of several complaints in December 2016, the Central Pollution Control Board has imposed a ban[XXI] on 52 stone crusher units[XXII] in Haridwar, but State Government either repeatedly pleads Center against such measures or tries to find ways to circumvent the ban and restrictions orders.

Way Forward Mining in Haridwar stretch of river Ganga has always been a sensitive issue. Unsustainable and mechanized riverbed excavation of minerals would prove invitation to an environmental disaster. Apart from inflicting severe damages on aquatic ecosystem, quarrying in excess impacts the natural flow path and pattern of the river thus leading to breach of embankments and causing floods in adjacent areas during Monsoon. Unabated and deep excavation of riverbed would also lower the groundwater and destabilize the river banks. In short, if not addressed properly, flawed mining practices, could trigger series of environmental reactions with adverse impact on local people, Haridwar Town and Ganga river itself.

It is a matter of grave concern that State Government has so far remains unresponsive to the plea of communities, civil society groups and experts raising voice against unscientific mining practices in Ganga.

It is good that National Mission for Clean Ganga has timely intervened[XXIII] in the matter and assured Matri Sadan strict actions against violators. Respecting to the Matri Sadan efforts and concerned raised by experts and environmentalists, the Union Environment Ministry must form a credible and independent committee to study the whole issue thoroughly and must stop all mining activities in Ganga till then.

Unfortunately, we have yet to see a credible Environment Impact Assessment of sand mining, nor is there any worthwhile public consultation process. There is nothing in the name of achieving compliance of the environmental norms, and implementation of environmental management plans. It is right time the concerned State and Central Departments take cognizance of these points to protect Ganga and other rivers of country from unsustainable mining practices.