The National Disaster Management Authority (NDMA) has recently published a report named “Study of Brahmaputra River Erosion and Its Control”. NDMA had commissioned this study to the Department of Water Resources Development and Management of IIT Roorkee. NDMA is an apex body constituted under the Disaster Management Act, 2005 to prepare the country to face natural and human-made disasters. NDMA is headed by the Prime Minster of India. Under the natural disasters category it includes earthquake, flood, tsunami, land slide and avalanches while nuclear, chemical or biological disasters have been categorized as human-made disasters. This report provides a lot of information and data on the Brahmaputra and its tributaries. The information about erosion is also very much detailed and descriptive. The report can be found at http://ndma.gov.in/ndma/latestdisasterupdates/NDMA%20Final%20Report%20Brahmaputra%20River.pdf

Pic:  2 Recent News Reports of Erosion in Subansiri River, One of the Largest Tributaries of Brahmaputra on the North Bank. Source: Dainik Janambhumi

This reports deals with a very serious issue of erosion in the Brahmaputra river basin in Assam. Erosion should not be confused with floods even though both are annual phenomena in the Brahmaputra river basin. Erosion can be seen to have a more severe impact than floods because erosion leads to permanent loss of land and property. During floods land and houses are submerged for a period of time. But erosion displaces people from their land and property for good. Erosion inflicts severe damage to agriculture, economy and cultural relations of people. Erosion compels people to migrate to different places. Villages get eroded one after another and people living in those villages have to move to another location with their belongings. But this may not be possible and affordable for all those who lost their land in erosion. So for many of them, living on the side of embankments in very poor living conditions remains as the only option. Erosion also leads to migration of rural youths to urban areas in search of jobs. In the last few decades erosion has posed as a greater threat to the people of Assam than floods. The severity of erosion can be seen from the Table 7 of the report in which Satellite Based Estimation and Comparison of Area Eroded In Brahmaputra during the Period 1990 to 2007-08 and 1997 to 2007-08 have been presented.

Map of the Study Area from the Report

The study divides the river length into twelve segments from Dhubri to Dibrugarh and that is why there are 12 reaches mentioned in the table.  It is clear from this table that the while the erosion prone length of the river is 10% higher along the South Bank of Brahmaputra compared to the same along North Bank. Areas facing erosion is 123% higher in South bank during the last decade (1998-2008) of the study period. The highest erosion area/per km of erosion prone bank is upstream of Dibrugarh, where the river enters the plains from the hills.

The Study Report:There have been a lot of studies done on the river, to find a solution to the issue. But what comes as a surprise is the attempt to shy away with some of the crucial issues of the riverine eco-system in the northeast. But before going into crucial issues, a brief note about the report is provided.

The March 2012 study is divided into two phases. The first phase is named as ‘Sattelite Data Based Assessment of Stream Bank Erosion of Main Stem Brahmaputra and Its Major Tributaries’. In the second phase processing and analysis of the hydrological data of the Brahmaputra and its tributaries has been done.

In the first phase of the study information and data of 18 years (1990 to 2008) has been put together. The study pertains to a reach of 620 km on the main stem of Brahmaputra River, i.e., its entire course in Assam from upstream of Dibrugarh up to the town Dhubri near Bangladesh border.  23 major tributaries (13 northern and 10 southern) within India have also been considered. The data for this whole area was collected using an integrated mechanism of Remote Sensing and Geographical Information System.

In the second phase of the study a new method of analysis called Artificial Neural Networks (ANNs) has been used. The data processed through this analysis has been used for modeling the rainfall-runoff process and runoff-sediment process for the study area.

The report identifies inherent ‘sediment overloading’ of the river fluvial system as the main cause for river bank erosion vis-à-vis channel instability in Brahmaputra. The report recommends by proposing river training works for two pilot areas on Brahmaputra River. The first site is in Bhuragaon of Morigaon district and second one is near the Guwahati airport.

The team of investigators for this study was led by Prof Nayan Sharma of the Department of Water Resources Development and Management at IIT Roorkee. This is a very descriptive report from the point of information and data about the river Brahmaputra and its tributaries. But even then there are several things that the report does not mention at all.

The report mentioned that inherent ‘sediment overloading’ as the prime cause for erosion in the river Brahmaputra. But another study named “River Bank Erosion and Restoration in the Brahmaputra River in India” has identified several other factors responsible for bank erosion.[1] That study states “The salient hydraulic and bank material factors responsible for bank erosion of the Brahmaputra system are i) rate of rise and fall of river water level, ii) number and position of major channel active during flood stage, iii) angle at which the thalweg approaches the bank line, iv) amount of scour and deposition that occurs during flood, v) variability of cohesive soil in bank material composition, vi) formation and movement of large bed forms, vii) intensity of bank slumping, and viii) progression of abandoned river courses to present-day channel.”

Identifying only ‘sediment overloading’ as the main reason for a dynamic river system like Brahmaputra seems an over simplification that overlooks the critical issues. 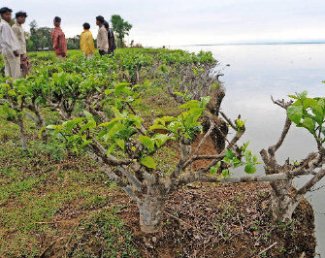 Even though the report identifies sediment overload as the prime cause of erosion, it has provided insufficient analysis as to why the sediment load is actually increasing in Brahmaputra. The report rightly states “Accelerated erosion has occurred in this region due to intensive deforestation, large – scale road construction, mining and cultivation on steep slopes.”

Pro Hydro Bias: Here the report completely ignores case of hydropower development in Arunachal Pradesh and its impact on Brahmaputra and its tributaries. The report nowhere mentions about the proposals for 168 hydroelectric dams in Arunachal Pradesh and its impact in the rivers in Assam. In the recent times, the state has witnessed mass protest against hydropower development in Arunachal Pradesh. In fact the report shows a pro-hydro bias when it laments that “less than 5% of the existing hydropower potential” have been put to use so far. At a time when people are demanding for cumulative impact assessment of dams on the rivers of Assam, reports like this attempt to create confusion among people. It is to be noted that when Assam was witnessing the mass protest against big dams, it was Dr. Nayan Sharma who appeared in the electronic media advocating for big dams. 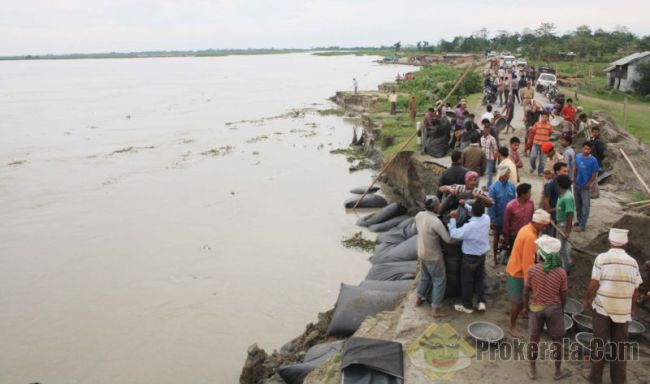 The embankments proposed in this report for the two pilot-study areas are proposed to be constructed using geo synthetic bags. The geo-synthetic bags will be put inside polymer rope gabions[4] and installed in the critical toe of the bank line. The efficacy of controlling erosion through geo-tube embankments still not established, but even then geo-tubes have become the buzz-word for flood protection in Assam. The Asian Development Bank has offered a loan of $12 million for erosion protection through construction of geo-tube embankments. But Assam government engineers working on Brahmaputra and its tributaries are critical of ADB’s programme of erosion control through geo-tube. In a report published in regional news paper on March 2010, it was stated that revetments like geo-bags cannot be successful in Brahmaputra because it creates a permanent deep channel along the existing river bank.[5] The report also stated that geo-synthetic bags which were installed for bank protection in Palashbari-Gumi area were washed away by Brahmaputra. This area is in the downstream of Saraighat Bridge and close to Guwahati airport area where one of the pilot projects has been proposed.

Impact of Structural Interventions Ignored: The report provides structural solution for erosion control but ignores erosions which were a result of structural interventions in the river. Studies on Brahmaputra basin have shown that during and after the construction of bridges in the river Brahmputra erosion and floods have increased in the downstream areas.[6] In the case of Saraighat Bridge, unprecedented flood and erosion was witnessed in Palasbari and Gumi area. Morigaona and Nagaon districts suffered the same after the construction of Koliabhomora Bridge. Construction of Naranarayan Setu, led to flood and erosion in Dakshin Salmara, Pancharatna and Mancachar.

Similar fears have been expressed for the fourth bridge on Brahmaputra which is under construction between Bogibeel of Dibrugarh district and Kareng Chapori of Dhemaji district. The river is nearly 9 km wide at this point. But for the construction of this bridge, the river had been shrunk to almost 5 km through the boulder spurs. This is posing a great threat of flood and erosion for the downstream areas which include famous river island Majuli and Matmora, where India’s first geo-tube embankment was constructed. Engineers who are involved in the construction of the dykes of the fourth bridge had been reported saying that Matmora area would come under severe threat due to the increased river pressure in the area. The report completely ignores all these facts and shows ‘sediment overloading’ as the cause of erosion.

Besides, the study gives a feeling that erosion in the river Brahmaputra operates in ceteris paribus[7]. The report made no mention about climate change and how it is going to impact a river like Brahmaputra which is flowing right from the Himalayan mountain range. At a time when impacts of climate change are taken into account for every possible environment related matters, ignoring this is another major lacuna of this report.

These critical lacunas put a question mark over the usefulness of the otherwise informative study. Credibility of IIT Roorkee reports have been questioned in the past too.[8] NDMA may keep this in mind and focus on more basic issues. For starters as monsoon sets in and rounds of floods start along Brahmaputra, NDMA’s flood forecasting links have stopped functioning for five days as we publish this in the 1st week of June 2013.

[4] Gabions are sausages made of Polymer ropes that are appropriately woven by a special process to fabricate the Gabions in various sizes. Gabions are generally available in a prefabricated collapsible form. Images of polymer rope gabions can be found here – http://www.garwareropes.com/polymer_rope_pro_g.htm