In a rather unusual development, no less than twenty districts in contiguous areas of Madhya Pradesh, Rajasthan and Gujarat had extremely high rainfall in the 48 hours ending at 830 am on Aug 23, 2020. Three of these districts had over 250 mm rainfall in this period, four others had between 200-250 mm, six each between 150-200 and 100-150 and one between 90-100 mm. This contiguous area broadly drains Mahi river to the West, Chambal to the North, Narmada to the South and Betwa to the East. These rivers, thus are now getting heavy flows, and will continue to get for the next few days, some of it from Chambal and Betwa will also end up in Yamuna and Ganga. It reminded one of the nightmarish memories of Sept 2019 when Gandhi Sagar Dam faced existential crisis and the flood peak downstream reached upto Farakka Dam, as CWC Flood forecasting director Sharad Chandra said in a television discussion recently.

Impacts of this massive rainfall is already being experienced and continues as we write this. At least three Monitoring Sites of Central Water Commission Flood Forecasting Program has already crossed their highest flood levels (HFL), all in Chambal basin. In Narmada basin, Indira Sagar Dam has seen massive flood inflow that has already reached 19250 cumecs, or 6.8 lakh cusecs. In Mahi & Betwa Basins too all the dams are experiencing massive inflows, for more details, see below.

Citizen Voice Senior journalist and author Shri Abhilash Khandekar wrote on Aug 22, 2020: ” I am in Mahalaxmi Nagar Indore today. All roads and streets here are full of water as there’s just no provision of drainage system anywhere. Almost knee-deep water. Also, because no space is left for natural percolation of water. Entire land has been paved in most areas of Indore colonies in 74 Scheme, Vijay Nagar and near by colonies. What Mr Atul Sheth, an engineer and planner, has said applies not only to Kesharbag Rd, but all over the city. And what about elected representatives, Mayor/ Corporators/ Chief Engineer, City Planners? Who will make them responsible? And we like to call it ‘Development’ …Wah Indore Wah!”

Chambal River Basin The impacts are most starkly visible in terms of the HFL crossing by at least three rivers already, bringing back the memory of the flood disaster of Sept 2019 when Gandhi Sagar dam came close to over topping. CWC tweeted late on the night of Sept 14, 2019: “As informed by Mr Bharat Gosavi, CE Dam Safety minutes back, Gandhisagar dam, MP is in great crisis, inflow 16 lakh cusec & outflow 5.0 lakh cusec, dam already full, going for some big overtopping, all disaster management agencies must be activated accordingly.” The crisis was so severe that the Cabinet Secretary called a meeting of National Crisis Management Committee to discuss that issue on a Sunday, on Sept 15, 2019.[i] 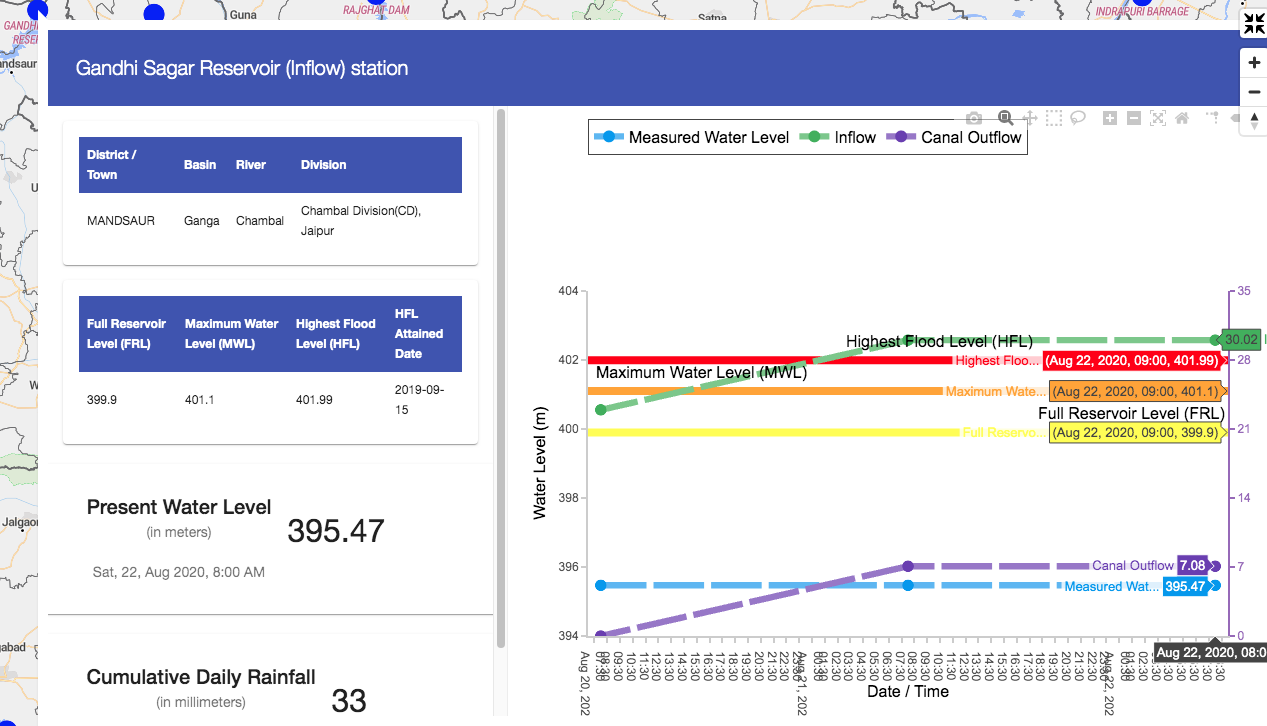 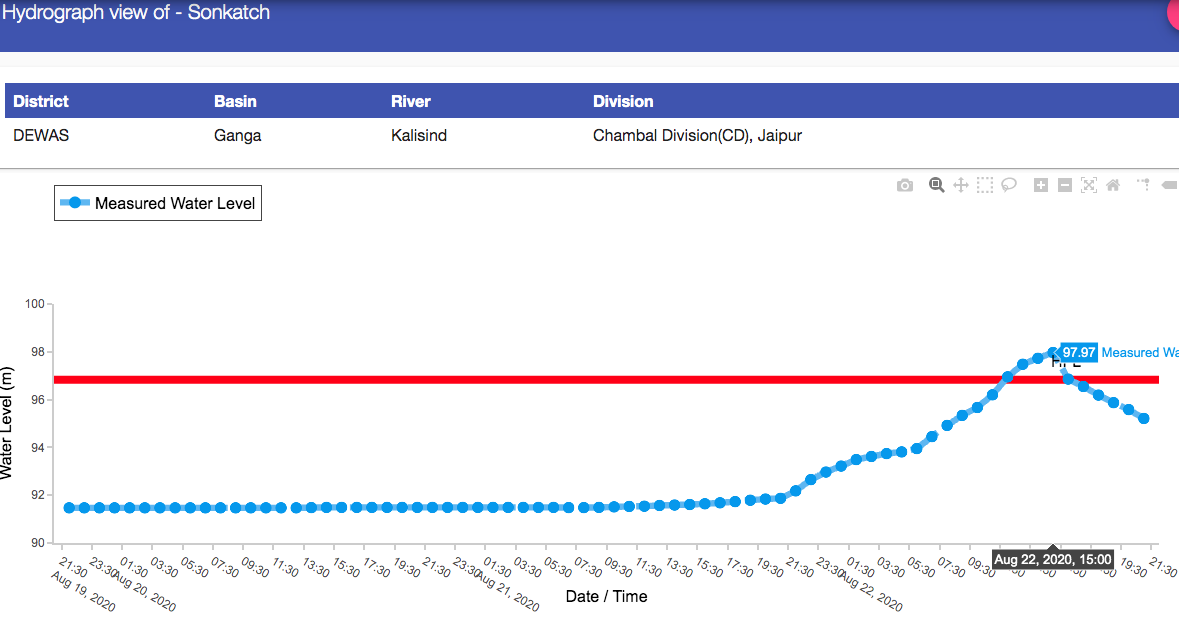 This crossing of the 2019 levels at three sites already sounds ominous.

In addition, water level jumped up by about eight meters at several monitoring sites, some of them are listed here.

Water Level at flood forecasting site at Dholpur (UP) on Chambal River started rising and is expected to cross the danger level on Aug 24 night. This is basically due to Parwati and other tributaries meeting Chambal downstream of Kota city, since the hydrograph at Kota City is stable, yet to start rising as outflows from upstream dams complex have not yet started.

Narmada Basin To the south of the region covered by the 20 districts is the Narmada Basin. Here the biggest reservoir of the country, Indira Sagar Dam has seen huge jump in live storage in recent days. In fact, the inflow into the dam has jumped to 19250 cumecs or massive 6.8 lakh cusecs & the water level has reached 260.34 m, less than 1.8 m below FRL. Inflow into the downstream Sardar Sarovar has also gone up to 6000 cumecs or about 2.1 lakh cusecs. The water level has also taken a leap to 125.27 m on Aug 23 morning. The trouble with CWC inflow hydrographs is that most of them give incomplete information, very rarely do we find full hourly information including inflow, outflow-canal and outflow-river.

Betwa Basin To the East of the high downpour region is the Betwa basin. Here the Rajghat dam had inflow of about 1300 cumecs on Aug 21, which was forecast to jump over five fold to 6605 cumecs. Outflow was expected to jump from zero to 6806 cumecs. 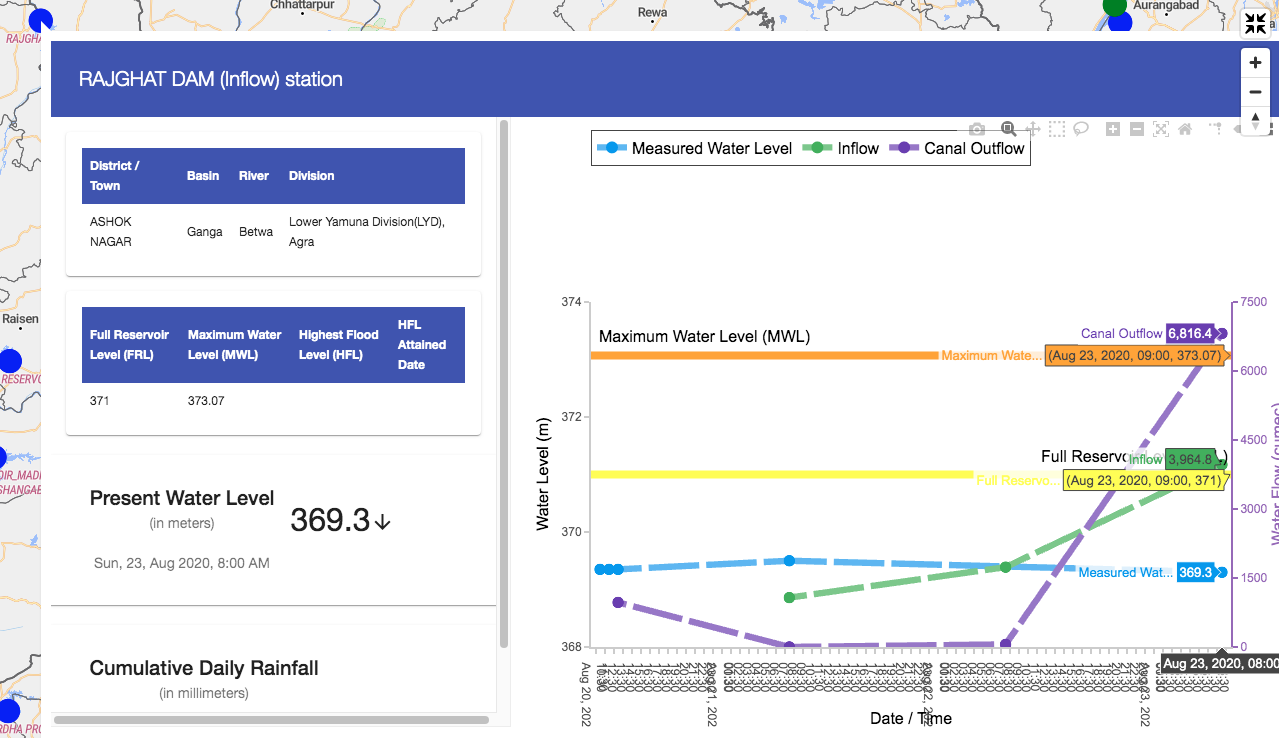 At downstream Matatila Dam, water outflow was expected to jump from zero to 8148 cumecs. At Mohana Flood Forecasting site of CWC, water level increased by over 5 mts in 9 hours on Aug 23 to 116.56 m from 111.51 m at 1200 hours. The flow projects at Rajghat have started reducing. 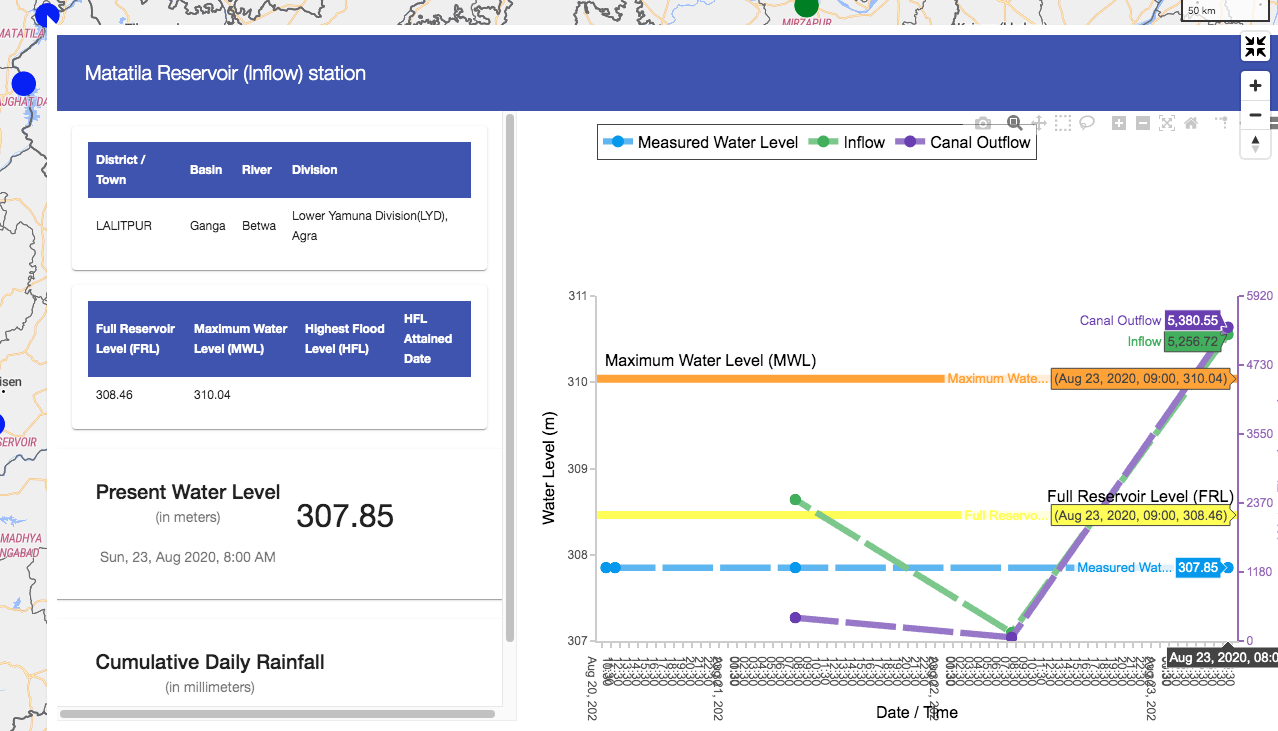 Mahi Basin To the West of the mapped districts, is the Mahi River Basin, flowing from Rajasthan and MP to Gujarat. As per IMD’s River Basin Rainfall Map for Aug 23 (24 hrs ending at 0830 hrs on Aug 23), Mahi basin as a whole received massive 103.7 mm rainfall in 24 hours, 1507% above normal.

The hydrograph below shows how within nine hours, water level at Borwa site in Ratlam district in Madhya Pradesh rose by 7 meters to 324.7 m at 0600 hrs on Aug 22.

As can be seen in the hydrograph below, the Anas PH-II site on Anas river, a tributary of Mahi, in Banswara district, the water level rose by a massive 14.8 m in about 18 hours ending at 1700 hrs on Aug 22. 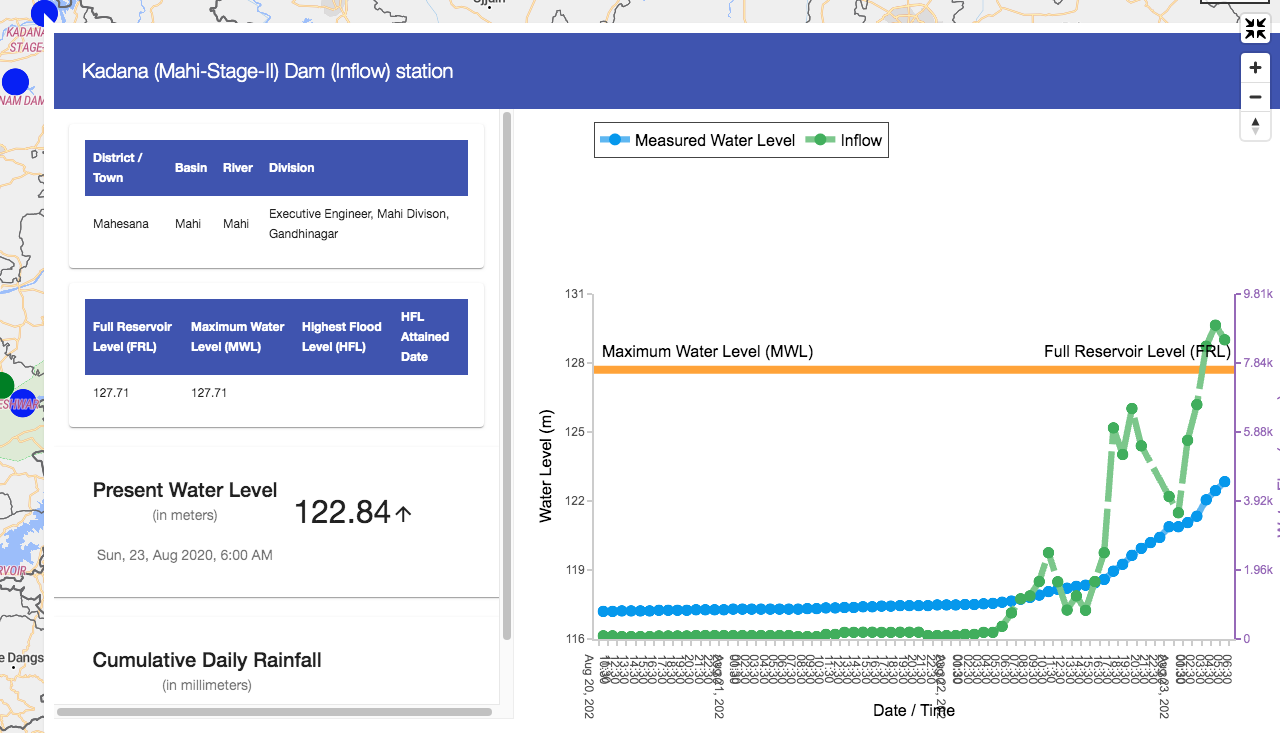 There is also Panam dam on another tributary of Mahi river in Gujarat, here inflow increased from 36 cumecs on Aug 23 morning to 60 fold higher figure of 2020 cumecs next morning.

In Conclusion Its scary that all the sites that saw the water level cross in Chambal basin on Aug 22, 2020 had their HFL reached only last year and these have been breached by huge 1.14 to 2.08 m. Secondly, the dams in these four basins (Chambal, Narmada, Mahi and Betwa) are almost full and soon they will start releasing all the inflows downstream. Unfortunately, neither rule curves, nor inflow, Canal-outflow & River-outflow for all the dams are available on hourly basis even for the dams that are under inflow forecasting of CWC FF.  This is essential requirement to ascertain how they are being operated. The National Disaster Management Authority held a National Conference on the issue of reservoir operation in flood season in Oct 2019[iii], soon after the 2020 monsoon, but we see no real improvement in the operation of dams this year or even in sharing of information about the dams.

The information that this region is going to receive heavy rainfall was available at least two days in advance. For example, this weekly bulletin from India Meteorological Department bulletin of Aug 20, 2020 had clearly forecast heavy rainfall in MP (Aug 21), Rajasthan & Gujarat (Aug 22-23): https://www.youtube.com/watch?v=JhvOfloCMyI&t=27s). Did we see any advance action plan from the dam operators and basin wise coordination in any of the basin, either when the forecast was available or even when information of the actual rainfall was available? Does the CWC FF take into account the actual rainfall information across the catchment of the specific dam and assess the possible inflow schedule and accordingly plan the outflows advisory and flood advisory? The answer is clearly no.

In changing climate, we may experience repeated events of such nature, as we did in 2019 and again 2020. If we do not change the way we operate our dams, we are bound to face more flood disasters.