Shimla Gujran village on the other side of DN-2 (Photo by Vikas Sharma, village doctor who had to fix an air tight aluminimum framed glass door at his clinic to avoid to deadly stench)

The news of ammonia laden pollution entering Delhi’s water supply via Yamuna River has become more of a routine. The periodical nuisance forces closure of Delhi Jal Board (DJB) water treatment plants for few days, leading in disruption of water supply to lakhs of people. But as usual, within couple of days things fall back to normalcy until the cycle strike back.

The source of pollution remains undisclosed with only hint that the origin presumably a drain carrying pollutants from Haryana sneaks into river somewhere upstream of Delhi. Much is not talked or heard about the mystic drain and the problem largely remains unfixed. Haunted time and again Delhi Government has now installed one Ammonia-Neutralizers and planning to buy more as a remedial measures.

Google Image showing the places mentioned in this report

To iInvestigate the issue, SANDRP along with Third Pole team reached Shimla Gujran, a village in Smallkha Block in Panipat district of Haryana where Drain Number-2 (DN-2) source of Delhi’s ammonia pollution passes through. The drain was full with filth and stinking unbearably at the time of visit. No sooner than we entered the village and began taking pictures of DN.2, we were surrounded by villagers of all age group including women, children. Even before we could explain our purpose of visit, a barrage of complains and grievances started pouring in. Villagers showed multiple ways in which they are badly affected by this pollution.

DN-2 is primarily functioning as a storm water drain and an escape to drain out excess flow from Western Yamuna Canal (WJC) and catchment area. The origin of the drain lies somewhere in Karnal but presently it is considered an escape from Munak head on WJC, Karnal. The drain is about 40 km long and carries industrial affluent from industries located in Panipat. The volume and toxicity of pollution increases greatly once the Drain Number-1 (DN-1) carrying all sort of industrial and domestic waste water from Panipat city and industrial sectors falls into DN-2 upstream Shimla Gujran village.

The historical town of Panipat is presently more famous for industrial development. The Petrolium Refinery, Thermal Power Plant, National Fertilizer and Sugar Mill units are established here. Over time thousands of dye houses have also settled in industrial hub which draw huge amount of ground water and in turn discharge polluted water in DN-1 in massive quantities. The industrial sector was reportedly asked to shift to Sector-29 where a CETP (Central Effluent Treatment Plant) has been installed. According local sources there is no clarity whether or not the plant is functioning. Also there is confusion whether the dye houses have shifted to the designated locations. Earlier there were 2 Sewage Treatment Plants (STPs) respectively of 35 and 10 million litres per day (MLD) capacity which are currently under up gradation to 90 MLD (60 and 30) thus non-functioning currently. Seeing the volume and colour of waste water flowing in DN-1, it is clear that CETP is also not operating properly. Even the ongoing work of enhancing the STPs’ capacity would be useless since both the STPs would be dumping treated (if treated at all) water back in DN-1, though the plants are surrounded by agricultural fields.

Shimla Gujran is like any other Haryana village in the vicinity of Bapoli block. The only difference is that it is bifurcated by DN-2. Which has been responsible for almost all the water and health related problems the village is suffering from.

Villagers report that about a decade back DN-2 was desilted and huge amount of polluted water  was released into it right after that. As a result chemical pollution has percolated deep in ground water table turning hand pumps and tube wells as deep as 200 feet useless.

They also report of hand pumps water producing stench, turning yellow and leaving marks inside vessels. Tube well water also creates foams and damages crops when used for irrigation. Even water from submersible is not fit for consumption. The villagers are drawing potable water as deep as 800 feet from a single Government installed tubewell as other second one is not working properly. Villages complain that the tube well supply hardly reaches across the village and there are families which are forced to stay awaken till mid nights waiting for water supply to reach their homes. Majority of villagers are paying extra money for water purifiers.

A village woman with skin problems, Vikas Sharma village doctor standing in yellow shirt reports of several other such cases on the increase due to water pollution by DN2

Currently every household in the village is suffering from water related diseases. Mosquito problem has become permanent and villagers cannot sleep out in open without mosquito net. The village doctor draws a sad picture of village health mainly due to DN-2. The doctor’s clinic close to drain has fixed air tight aluminium framed glass door to avoid the smell emanating from drain entering inside. There are hardly any villagers left, who are not suffering from one of the diseases like skin allergies, weakness of eyesight, hair losses, jaundice, asthma, typhoid or malaria. The stench of pollution has also forced villagers use room fresheners.

The cattle have also been falling prey to the pollution impacts and villagers have long back shunned taking them to the drain for bath which was common about a decade back. They also report to have raised the issue many a time before the administration and elected representatives but in vain. Now they are tired and hopeless.

In a detailed telephonic conversation Virendar Punia Sub-divisional Officer (SDO) of HPCB – Yamuna Nagar responded calmly to the several questions pertaining to Dhanaura Escape pollution. According to HPCB Yamuna Nagar, the district is generating double the sewerage (70 MLD) than installed treatment capacity (35 MLD) and the up-gradation of STPs is proposed. Contrary to the farmers’ claims and complaints the SDO reports that Dhanaura Escape largely carries domestic pollution and not the industrial effluents. He further maintains that industries are managing their effluents well and there can be no presence of heavy metals in the notorious drain as claimed by media reports.

Surprisingly the SDO cited survey and sampling reports that find biological oxygen demand (BOD) level of Dhanaura effluents within permissible limit which is 3 milligram per litre. The official believes that treatment of pollutants inside the drain and application of other pollution treatment technologies can be helpful in making Dhanaura drain pollution free.  On the question of impact of pollution on fisheries the SDO replied that Yamuna River remains dry for about 8 months in a year hence devoid of aquatic life and they neither monitor aquatic eco-system nor have any information of any such impact. The official confesses that toxicity and density of pollutants discharged in DN-2 is far greater than in Dhanaura Escape.

The official has worked in Panipat also and reveals that pollution of ground water in Shimla Gujran area may also be due to effect of reverse pumping of pollutants by industries which was a common practice about a decade back. 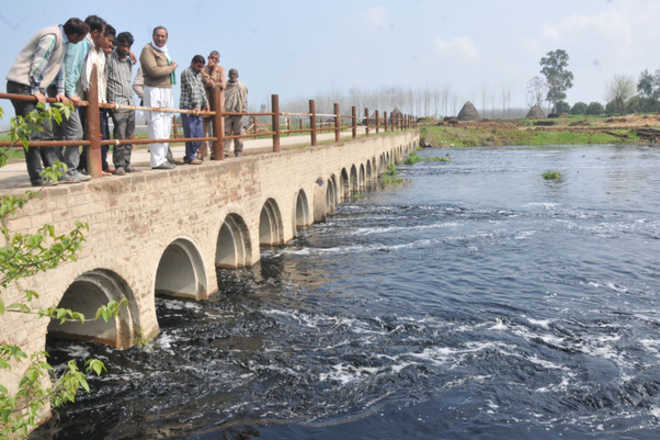 Similarly SP Verma SDO HPCB Panipat denied that DN-1 carries any untreated industrial effluents. He too reported of conducting sampling of DN-2 water which again shows the presence of BOD meeting the prescribed limit of 3mg/l.  The sewage pollution is entering River Yamuna untreated as the STPs in Panipat are under up-gradation.

Discussion: During Atal Bihari Vajpai regime as Prime Minister, potable water supply was to Delhi was redirected via Drain Number-8 which joined River Yamuna at Palla in National Capital Region. Since then DN-2 was left dry and industries located in Panipat, particularly dye houses started dumping waste water in it and the volume tremendously goes up once the DN-1 carrying more industrial effluent joins it upstream Shimla Gujran. For more than a decade the pollution have been impacting the daily life of thousands of villagers located all along the drain which ultimately falls in Yamuna River.

Since Yamuna River remains dry during lean season the pollution is absorbed by vast sandy riverbed. It is only when sudden fresh water current released either in Yamuna from Hathini Kund Barrage, Yamuna Nagar, Haryana or in DN-2 from WYC (Western Yamuna Canal) at Munak, Karnal thatt pollutants reach Delhi water treatment plants causing a shut down. Very often Dhanaura escape in Karnal carrying industrial effluent from Yamuna Nagar and DN-8 transporting waste water from Sonipat both located up and downstream of Panipat respecively repeat the same cycle which escalates the ammonia pollution in Yamuna River.

It is sad that much emphasis and focus is given to the Delhi ammonia pollution whereas thousands of villagers whose health and daily life have greatly been impacted and who are paying a huge price for the problems they are never part of, continue to suffer in multiple ways. While urban centres like Delhi manage to find ways to deal with the pollution, already helpless rural areas are left to suffer and fend for themselvess.

It is interesting that the SDOs of the HPCB Yamuna Nagar and Panipat are denying presence of any industrial pollution in severely polluted Dhanaura Escape and DN-2 and reporting them as meeting the recommended  BOD level which given the field observation is contentious and questionable claim.  This raises the larger question on the functioning of HPCB itself and reinforces the long standing demand of ensuring public participation in the monitoring of not only STPs but industrial pollution, river pollution, and also functioning of CETPs.  It is also advisable that these monitoring agencies record presence of river biota around their sampling sites.

The word Shimla was added to the village name due to presence of the clean water flow in DN-2 in earlier times, which would keep the village area cool apart from benefitting the villagers innumerably. Now the same drain carries all sort of industrial toxic filth turning the adorable place in a living hell.

It is time that Haryana Government pay due attention to the issue and fix sources of pollution in the DN-2. Also the Ministry of Water Resources, River Development and Ganga Rejuvenation as well as Union Ministry of Environment and Forests and state and central pollution control boards  should immediately take cognizance of the issue and initiate necessary legal action against all those involved and take remedial measures to check pollution of DN-2.

One possible solution could be supplying Delhi’s share of water via DN-2 as was happening earlier. It would help deter the abuse of DN-2 besides ensure a flowing Yamuna River upto Delhi. 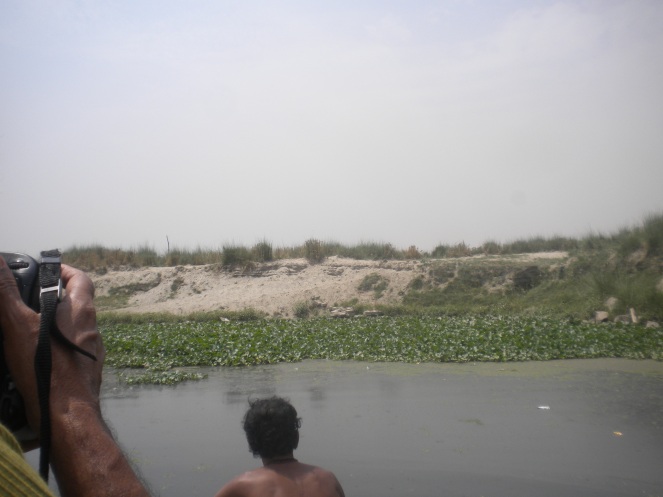 Eutrophication process in Yamuna due to pollution brought by DN-2

To know other sources of pollution entering Yamuna River upstream Delhi, you may like to explore another SANDRP blog on the issue Blow by Blow, how pollution kills the Yamuna  river

One thought on “Shimla Gujran in Yamuna basin: Journey from a flourishing village to a living hell”