The landslide incident[i] on under construction Char Dham All Weather Road Project in Rudraprayag district of Uttrakhand has killed 8 labours on 21 December 2018 around 12.30 pm near Banswada in Ukhimath Bhiri area on the Rudraprayag-Gaurikund national highway (NH 107).

On 22 December 2018, body of a 19 year old worker was recovered[ii] by the rescue team. A total of 23 workers  were at the site at the time of the incident. As per reports, 11 workers got buried under debris, 5 workers were critically injured while 12 others had narrow escape. All the victims[iii] are stated to be from Uri town in Baramula district of Jammu & Kashmir. As per locals, one of the JCB machine placed at the site has fallen[iv] in the river along with debris.

The Ukhimath police has registered an FIR against a private construction company, holding it responsible for the mishap at the construction site of Char Dham all-weather road. Preliminary observations by police team has found major negligence[v] of the executive body.

As per police the work was being carried out without following the basic safety standards for the workers. The director and supervisor of the private construction firm have been booked[vi] under various sections of Indian Penal Code.

Manglesh Ghildiyal, the District Magistrate, Rudraprayag has also ordered[vii] magisterial inquiry into the incident. Jakholi SDM has been asked to submit the probe report within 10 days. Additional chief secretary of Uttarakhand, Om Prakash, has ordered a safety audit of the all-weather road construction sites to check whether the work is being done adhering to scientific norms.

The audit team will comprise of a senior geologist and a senior officer from the PWD. Some of the workers alleged that the landslide was triggered[viii] by construction work and had occurred as the mountain was being cut to widen the road.

Surprisingly about a week before the Rudraprayag landslide incidents, the DM has also found significant negligence being exercised by the Noida based RGB construction company in cutting the hill slopes.  The company has not even provided helmets and insurance cover to the workers. Earlier, in June 2018 and September 2018 it was issued noticed for not following safety measures. 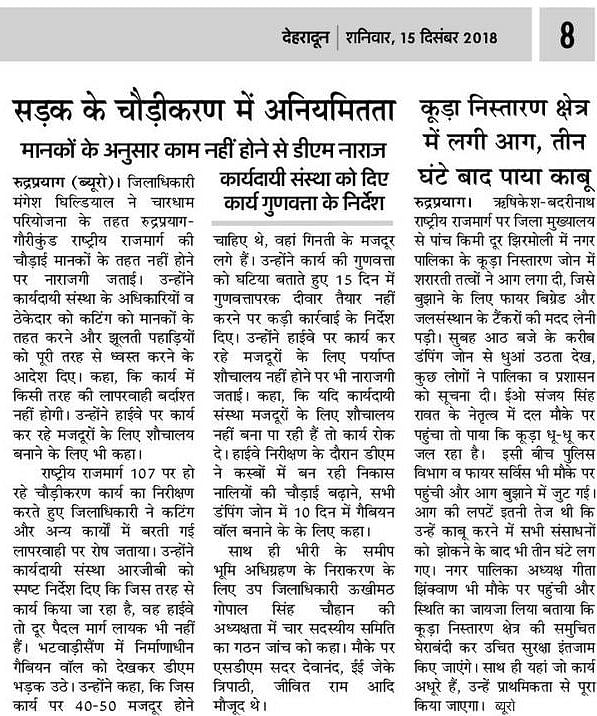 According to data compiled by the Uttarakhand’s Disater Mitigaton and Management Centre, 529 landslide prone areas have been identified on the Char Dham route. Rudraprayag district where the landslide occurred has the highest number of landslide zones at 319.

Local People Protesting Against The Project

The project would displace[ix] about 3000 villagers in the district. Many residents have been protesting against the project demanding fair compensation. On December 7, 2018, the local people including shopkeepers and traders closed the district and took out a massive protest rally[x]. On December 15, the protestors launched an indefinite hunger strike[xi] demanding proper rehabilitation and compensation.

This is one of the worst landslides so far due to the 889 km long highway project[xii] which has been broken into 52 parts to bypass the mandatory environmental clearances. The Rs 11,700 crore rupee project is ongoing despite the fact that the matter is sub-judice.

On 22 October 2018, the Supreme Court (SC) had stayed[xiii] National Green Tribunal (NGT) order clearing the two lane highway project. During 26 November 2018 hearing the SC has asked the Centre to file its reply[xiv] within two weeks.

Meanwhile, Char Dham All Weather Road Project creates another landslide on Dec. 22, this time on Badrinath Rishikesh Highway near Farasu Mandoli village in Srinagar. The work is damaging the roads causing difficulties for local commuters who are also getting injured during night time. People say debris and stones are falling continuously disrupting the traffic for hours. 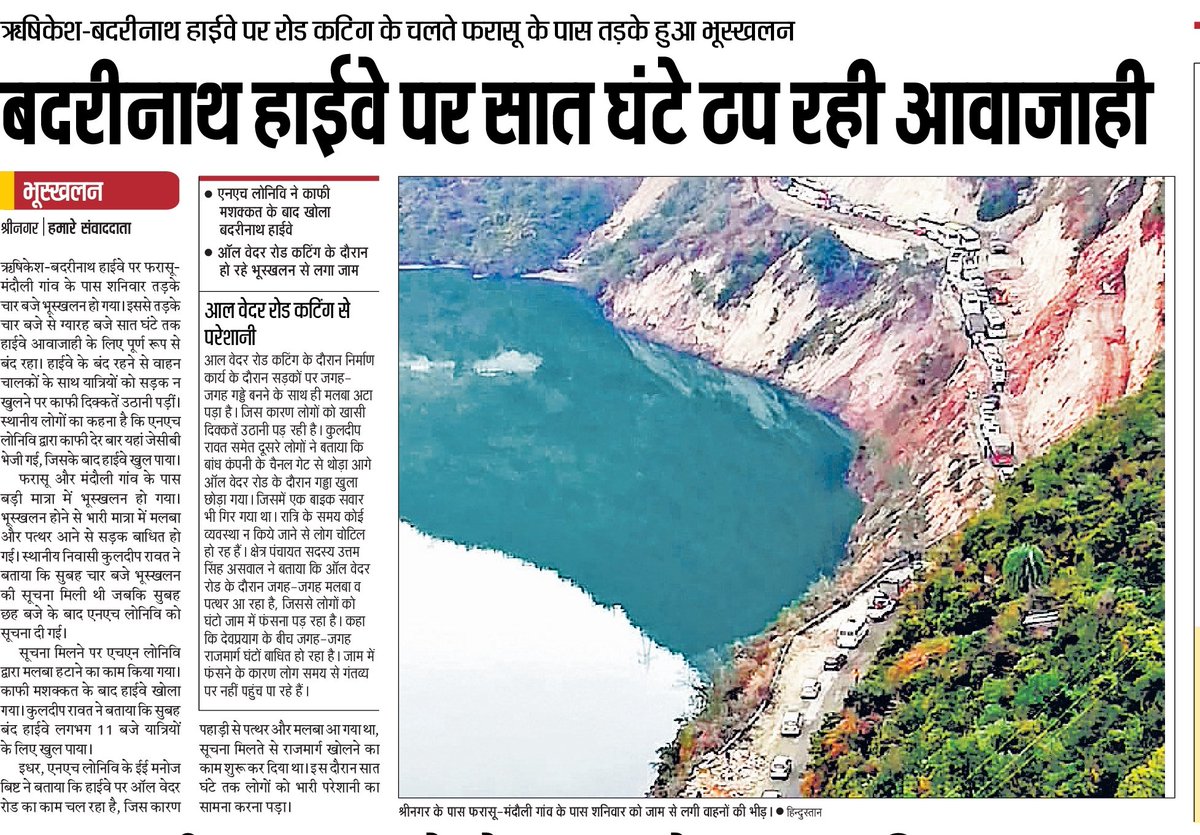 Despite SC orders muck dumping in Alaknanda River continues on Badrinath NH. Similarly many villages along the slope on Chamba Rishikesh highway are affected due to muck dumping says the Amar Ujala 16 Dec. 2018 report.

The local Hindi dailies (between 15-25 Dec. 2018) are replete with reports revealing serious negligence and violation of norms in execution of the project leading to fatal landslides across the state.