Villagers were alarmed when the gushing water started reaching fields, cowsheds and some village homes. They staged a protest and demanded that canal be repaired within three days. Following complains to local MLA Vinod Kandari, a team from Uttrakhand Irrigation Department and Public Work Department (PWD) inspected the affected areas.

The Kritinagar SDM Anuradha Pal also inspected the villages and issued notices to Alaknanda Hydro Power Construction Limited (AHPCL) the developer and operator of the project. She also formed three member probe team comprising of Executive Engineers from Irrigation Department, PWD and Revenue official to look into the issue.

The preliminary inquiry has found leaks in the power channel at five places. They revealed that the situation was worrying and could become dangerous for villagers if safety measures are not applied.

The report also said that the company has failed to plug the leaks. As per probe team there have been serious negligence during construction of canal that have resulted in the leaks. A detailed report will also be submitted to the district administration.

Accompanying the inquiry team, the local MLA has demanded the AHPCL to stop power generation until the leaks are permanently fixed. He also promised to raise the issue before Chief Minister and demand strict actions against the company.

Srinagar HEP has been controversial since the beginning. In 2008, 2009 and 2010, the coffer dam of the project broke. The project has come up despite violation of several environmental norms. 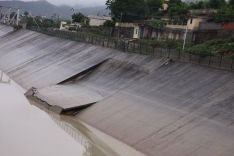 The desiltation chamber wall of the project collapsed and leakages in the canal were found in July 2014. Again in July 2015, the walls of desiltation wall collapsed flooding several houses and fields in these villages.

Octber, 2015 GSI says Shrinagar HEP's Power Channal is not as per norms. Need to re-examin. Mangsu and other villages are under threat. Govt. , GVK com. Sleeping. No proper action on GSI report. Now since yesterday water is entering in villages. Administration doing patch work. pic.twitter.com/7sL6NL1wwU

The project created disaster for Srinagar town during June 2013 floods. The Ravi Chopra Committee, appointed following the Supreme Court order of Aug 2013, confirmed the role of the project in worsening the floods in the downstream area.

In August 2016, the National Green Tribunal (NGT) fined the company Rs. 9.26 crore as compensation for flood victims. The shopkeepers of Dhari Devi temple whose shops were submerged by the project were compensated only after eight years.

Ever since its, inauguration in March 2014, about 3 km long power channel known as Shakti Canal has been leaking at more than 20 places and the residents of Naur, Kinkleshwar, Mani Chouraas, Gaursali, Naithana and Jyudisera villages had been repeatedly complaining against it but in vain.

They also allege that the company has not been paying land lease for last five years. Now about 70 residents from these villages are demanding relocation as permanent solution.

Also See, Why the Srinagar Hydro Electric Project continues to remain a threat