Gosabara wetland declared IBA In March 2017 during a two days workshop, The Bombay Natural History Society (BNHS) declared 96 sq km coastal wetland area of Gosabara-Mokarsagar in Porbandar, as Important Bird Area (IBA) site. There are around 544 IBAs in India and 18 in Gujarat. As per experts though IBA does not have any legal status, it helps environmentalists to raise alarm if the site faces any threats and press for its conservation. In 2001, Salim Ali Centre for Ornithology (SACON) conducted a country-wide survey for important ‘Inland Wetlands of India’ and Gosabara-Mokarsagar wetland was one the 50 important wetlands of the country.  https://timesofindia.indiatimes.com/city/rajkot/gosabara-wetland-now-a-bnhs-iba-site/articleshow/57453811.cms  (The Times of India, 4 March 2017)

Govt finally forms 23-member wetlands panel In June 2017, after six years, the Gujarat govt  finally formed a 23-member state wetlands conservation authority, for conservation and management of the state’s wetlands. The committee was formed under the Wetlands (Conservation and Management) Rules. However, the steering committee is yet to be formed. “In the absence of these authorities, no projects for conservation of wetlands were taken up by the state govt,” said a senior govt official. The officer said various depts of the govt were acting on their own and ended up destroying the habitat.

The committee will be responsible for preparing an inventory of wetlands in the state. It will also identify and list particular wetlands to be regulated under the provisions of the rules. The committee will mainly lay emphasis on Nalsarovar, which was the only Ramsar site in the state. https://timesofindia.indiatimes.com/city/ahmedabad/gujarat-finally-forms-23-member-wetlands-panel/articleshow/58952579.cms (The Times of India, 2 June 2017)

HC suo motu takes up wetlands preservation In a remarkable development, Gujarat HC on June 7, 2017 taking suo motu cognizance of the issue of protection of wetlands in Gujarat filed a PIL in this regard. In the very next hearing on following day the court  sought a reply from the state authorities concerned over measures taken to preserve Gujarat’s main wetland, the Nalsarovar bird sanctuary on 12,000 ha and regarding its present condition.  As per report, Gujarat has 17.56% of its area under wetlands which was shrinking. The Banni grassland and Nal Sarovar are the largest wetlands in the state. https://timesofindia.indiatimes.com/city/ahmedabad/hc-files-pil-for-wetlands-preservation/articleshow/59025208.cms (The Times of India, 7 July 2017)

Fish dying of pollution, officials busy in blame game On June 18, 2017, hundreds of dead fish were found floating in Sabarmati riverfront. The number of dead fish was so large that 10 tractors could be filled with them. Now on July 2, 2017, around 400 dead fish were found floating at Ghodasar Lake in Maninagar. But the Ahmedabad Municipal Corporation (AMC) and the Gujarat Pollution Control Board (GPCB) official were blaming each other for the incident. http://indianexpress.com/article/cities/ahmedabad/gujarat-scores-of-dead-fish-in-water-bodies-blame-it-on-poisonous-discharge-4751280/ (The Indian Express, 15 July 2017)

Little Rann of Kutch under threat This is an informative article and a short video on Little Rann of Kutch. The seasonal inflow of water during monsoon transforms Little Rann Kutch (LRK) into a large, shallow wetland. In subsequent warmer months though, the floodwaters evaporate, gradually transforming it into a saline, dusty desert. These seasonal water dynamics makes LRK a highly productive landscape–both ecologically and economically. This wetland is a source for one-third of India’s total inland salt production. Besides producing salt, the region is also the main source of ginger prawn export. Though a seemingly stark landscape, it is rich in biodiversity and is an ecologically important area for wildlife and many local and migratory water birds. It is known to be the world’s last refuge of the Indian Wild Asses and acts as a major nesting ground for the gorgeous Lesser Flamingoes–the only place outside Africa to serve as a conducive environment for the breeding of these magnificent birds.

THREATS: Unfortunately, the Little Rann of Kutch is at a risk of losing all these. It is being increasingly threatened by upstream hydrological regime changes. By increasing diversion and storage of water from the catchment into dams, the seasonal flow of freshwater into the LRK is reduced. Further, the blocking of creeks reduces the essential seawater inflow into the LRK which impinges on the natural interplay between salt production, prawn fishing and migratory patterns. Without the seasonal water flow dynamics, the LRK loses its unique ecological character, and subsequently, its productivity.  http://www.indiawaterportal.org/articles/little-rann-kutch (India Water Portal, 19 July 2017)

Plan to interlink lakes of Ahmedabad city Two committes of the AMC approved (water and sewage Rs 268 crore & road and building Rs. 150 crore) infra work worth Rs 418 crore including 100 MLD STP construction at Vinzol. AMC has also approved a work on the instalment of a gravity line for interlinking city lakes. At present, 16 lakes are interlinked but some pockets have been left. A new 3.5-km line will be laid between Jaspur and Khoraj. http://www.dnaindia.com/ahmedabad/report-amc-committees-approve-infra-work-worth-rs-418-cr-2551669 (DNA, 10 Oct. 2017)

Earlier the interlinking created hazard in 2010. Under the lake interlinking project, the Ahemdabad Urban Development Authority (AUDA) has laid drainage lines to connect all the 16 lakes. But it has not laid a parallel storm water drainage line to carry the additional water. Moreover, the Auda has not connected the Vastrapur lake with the one in Makarba.

The Vastrapur, Prahaladnagar, Chandlodia and Sola interlinked lakes are facing sewage overflow problem.  For security reasons, these lakes had to be closed down. One child also reportedly lost his life, after he slipped into the muck, in 2005. Residents have been complaining of health related problem due to overflowing sewage.  http://www.dnaindia.com/india/report-overflowing-lakes-in-ahmedabad-a-health-hazard-residents-1421284 (DNA, 10 Aug. 2010) 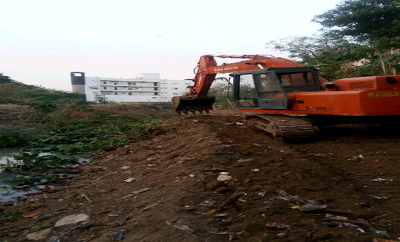 Birdwatchers, officials puzzled as lesser flamingos delay arrival In Dec. 2017, in peak winter, the Chhaya Rann, a wetland in Porbandar was waiting for the lesser flamingos. While local birdwatchers were intrigued by the delay in arrival, forest officials expected the birds to arrive in some weeks.  The lesser flamingos (Phoeniconaias minor) have been categorised as near-threatened by the International Union for Conservation of Nature (IUCN). After Little Rann of Kutch, Great Rann of Kutch and Nal Sarovar (in Ahmedabad district), Chhaya Rann is believed to be fourth largest roosting place of lesser flamingos.  http://indianexpress.com/article/india/gujarat-birdwatchers-officials-puzzled-as-lesser-flamingos-delay-arrival-5005688/ (The Indian Express, 31 December 2017)

Wetlands authority exists only on paper Despite repeated instructions from the govt of India to from a state wetlands authority, to preserve ecologically important wetlands in the state, the government has ignored them. It had formed a state wetlands conservation authority in May 2017, but that remains on paper only, as the body has not started working. Not a single meeting of the high-powered committee of the authority, which is chaired by the state forests and environment minister, Ganpat Vasava, has been held. The authority is mandated with implementing The Wetlands (Conservation and Management) Rules 2016 and 2010, but nothing has progressed since the body was formed last May. https://timesofindia.indiatimes.com/city/ahmedabad/gujarat-wetlands-authority-exists-only-on-paper/articleshow/62515336.cms (The Times of India, 16 Jan. 2018)

Can we save our wetlands? In Jan. 2017, taking the case of Madhya Pradesh and its wetlands as an example, environment expert K.G. Vyas explains how the wetlands can be saved from further deterioration. The report presents pointers about wetlands in Madhya Pradesh. http://www.indiawaterportal.org/articles/can-we-save-our-wetlands (India Water Portal, 25 Jan. 2017)

Bhopal lakes lose out to water pollution, poor sewer network As per Oct. 2017 report, Bhopal, the city of lakes, which has been declared country’s second cleanest city, has failed to keep its water bodies clean. According to reports, about 300 MLD of sewage is discharged from the city out of which only 50 MLD gets treated in the STP. This is because the existing sewer pipeline network does not have capacity to carry more sewage than this. As a result, remaining sewage gets mixed in other water bodies. http://www.freepressjournal.in/bhopal/bhopal-lakes-lose-out-to-water-pollution-poor-sewer-network/1149594 (Free Press Journal, 7 Oct. 2017)

State losing lake wealth According to The Tribune report, three of State’s most popular lakes Jal Mahal, Jaisamand, and Udaisagar are among the most severely polluted water bodies in the country. Almost all water bodies of Udaipur, popularly called the ‘City of Lakes’, are highly polluted and encroached upon. The condition of Pichola Lake is symptomatic of the ills that plague the lakes and rivers of the city. Once used for potable water, the lake today is surrounded by 55 raw sewage inlet points. Incidentally, the state govt has earmarked a budgetary support of Rs. 157.61 crore for water harvesting and plantation in 17 districts. Water resource projects worth over Rs. 12,000 crore, too, are in the pipeline. http://www.tribuneindia.com/news/sunday-special/people/rajasthan-losing-lake-wealth/366118.html (The Tribune, 19 Feb. 2017)

Sambhar lake; a Ramsar site facing extinction This Jan. 2018 report reveals that, the Sambhar Salt Lake, a Ramsar site which was once a large saline lake fed by four rivers set in a shallow wetland, is dangerously close to extinction. The lake has dried up and the flamingoes that used to visit the lake in thousands have reduced to just a few. Salt extraction, earlier done by surface brine, is now done by 1,544 borewells dug all over the lake. Ironically, after being designated as a Ramsar site, a wetland of international importance on March 23, 1990, Sambhar has been nobody’s baby. https://timesofindia.indiatimes.com/city/jaipur/sambhar-a-lake-no-more/articleshow/62552440.cms?utm_source=facebook.com&utm_medium=social&utm_campaign=TOIDesktop  (The Times of India, 18 January 2018)

Destruction of Wetlands In a comprehensive op-ed well known economist, Jayanti Ghosh disclosed that Supreme Court has agreed to construction of hotel in the middle of Udaipur lake, that is sure to destroy the 16th century lake.

– The SC was able to go ahead with this even though Udaisagar is a wetland as it held that “in this instant case wetland rules do not have any force on the land in question because there is no relevant notification issued by the competent authority under the rules”.

– Adverse consequences: We can only speculate on the reasons for state procrastination in notifying wetlands and obeying its own rules, but the role of “lobbying” in various forms must explain part of the disproportionate favours (through sins of omission and commission) that have enabled such transgressions. At present, there is a citizens’ movement protesting against this project, but if it gets completed, there will be severe long-term consequences for the ecology of one of Rajasthan’s most important cities and for the surrounding region. The tragedy is that the State govt, the Central govt and, most disturbingly of all, the Supreme Court of India seem content to allow these adverse consequences to happen. http://www.frontline.in/columns/Jayati_Ghosh/destruction-of-wetlands/article10006443.ece (Front Line, 19 January 2018)

Rarely seen Kittiwake sighted visiting wetlands In Jan. 2018, Goan birders and a few forest officials tramping around the bigger wetlands in North Goa on their annual water fowl count have reportedly seen black-legged Kittiwake bird. This seabird species from the gull is not a regular visitor to India and hardly eight sightings have been reported so far. During the last few days, the little gull has been spotted by some birders at the Morjim sandbank.  https://timesofindia.indiatimes.com/city/goa/rarely-seen-kittiwake-sighted-visiting-wetlands-in-state/articleshow/62596644.cms (The Times of India, 22 January 2018)