Economic Survey Report of Maharashtra state for the year 2015-16 is out. For the Agriculture and allied activities sector, its findings are sad though not shocking. The sector has clocked negative growth rate of 2.7% and production of almost all Kharif and Rabi Crops has taken a hit following the second consecutive monsoon failure and 59.4% deficit. 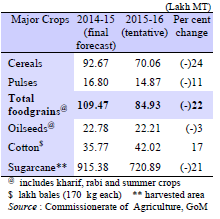 But what is shocking is the lackluster way in which the section on Irrigation Projects has been handled in the report for the second consecutive year of the BJP Government. A year back, in January 2015, CM announced that Economic Survey Report will be revamped and realistic figures on the area irrigated by dams and canals infrastructure will be put in place. He had said “Our government does not believe in manipulated data”.[i] In the times of NCP-Congress government, current CM and BJP had strongly protested against the non-publication of comprehensive irrigation data, in coordination with Revenue, Agriculture and WRD. In Jan 2015 CM had also said that the govt will be integrating irrigation data right from the village level and that dams without distribution network cannot be included in the head of “Irrigation Potential Created”. These were all welcome changes. However, nothing changed in the ESR of 2014-15. On this background, we had hopes that the ESR of 2015-16 will show signs of some change. however, it seems to follow the exact template of past ESR without any changes.

This is not a minor issue. It was the ESR of 2012-13 which indicated that in the decade between 2000-2001 and 2009-10, ratio of gross irrigated area to gross cropped area increased by only 0.1% (17.8% to 17.9%), indicating that the expenditure on irrigation infrastructure in the past ten years had not led to closing the gap between cropped and irrigated area. It also exposed that Maharashtra, despite having the largest number of large dams in the country, had the lowest ratio of irrigated land at 17.9%, when the national average was 45%.

This issue was picked up by several agencies, including the erstwhile Governor and this, along with the unstoppable dam scams, was one of the major reasons behind the collapse of Congress-NCP Government in Maharashtra.

Following this, the exact figures of the ratio of gross irrigated area to gross cropped area have not been published by the government for the past two years since the new government has come to power. Neither are the Irrigation Status Reports, Water Audit Report or Irrigation Benchmarking reports being published for the past 5 years and more. This state of affairs is serious and worrisome.

Here is a look at the Irrigation data shared by the Water Resource Department of the State for the year 2014-15. This data has not been ratified by the Revenue or the Agriculture Department. The WRD in itself does not have any system to ascertain irrigated area and at best these are crude claims, with little field verification.

We appeal to the government to immediately restart publication of Irrigation Status Report, Water Audit Report and Benchmarking of Irrigation Projects Report from this year and also urgently make comprehensive data on irrigation, in coordination with Revenue, WRD and Agriculture Department available in open domain. This can be a first step forward in reinstating transparency and efficiency in Maharashtra’s Water Sector.

With this background, it is shocking to see the State Finance Minister Sudhir Mungantiwar stated in the Assembly that “I feel very proud and happy to state that the budgetary provision of Rs.7272 crore for water resources projects provided during year 2015-16 has been completely distributed. The project which will yield immediate benefit to farmers were given priority in release of fund.”

However, we do not have even the most basic data available about the irrigated area of projects. Looking at the fact that there is nearly NO change in the number of Ongoing and Completed Major and Medium Projects between 2014-2015 and 2015-16, what was concretely achieved by spending 7,272 Crores? This can come out only if the Government publishes an irrigation status report, which they have not. Does this mean that we wait for one more explosive White Paper?

The Finance Minister further stated: “During 2016-17 total budgetary provision of 7850 crore has been made. As a result, 28 projects will get completed and additional water storage of 770 million cubic meter (mcm) will get created and 1.68 lakh hectares of land will come under irrigation. Seven irrigation project namely Waghur, Bavanthadi, Lower Dudhna, Tillari, Lower Wardha, Lower Panjhara and Nandur Madhveshwar Phase II has been included under Pradhanmantri Krushi Sinchai Yojana (PKSY) . In year 2015-16 budgetary provision of Rs. 938 crore was made available and during 2016-17 sizeable outlay of Rs.2078 crore is being proposed. On completion of these projects an irrigation potential of 1 lakh hectares will get created.”

However, looking at the dismal performance of the existing projects and also the lingering issues of the AIBP Projects listed above, it seems that we are going in the same direction which did not yield results. We had looked at the status of AIBP Projects in Maharashtra here. On the other hand, no specific fund outlay can be observed for institutions like MWRRA which are coordinating Integrated State Water Plan and River Basin Plans.  Similarly, no specific outlay for groundwater conservation and management has been made, which is in fact the water lifeline of the state and of its farmers, who are supposedly the focus of this State Budget.