In the years 2018 and 2019, I spent months walking East across India with Paul Salopek on the Out of Eden Walk[i]. His trail started in the Great Rift Valley of Ethiopia in East Africa, roughly following the path of the early human migration out of Africa and across the globe.

The India trail of the Out of Eden Walk started from the India-Pakistan border at Wagah, Punjab. It then moved East through the Indus Basin, followed by the basins of West flowing desert rivers like Luni, then a large chunk through the southern Gangetic plains in Central India before crossing over to the Brahmaputra basin close to Siliguri in West Bengal. The crossover to Myanmar happened at Moreh in Manipur, also incidentally very close to the basin boundary of Brahmaputra and Irrawady. He entered India in March 2018, and crossed over to Myanmar in July 2019.

I walked with Paul in different stretches, spread across Rajasthan, Madhya Pradesh, Uttar Pradesh, Bihar, West Bengal and a bit of Assam. This series of three Photo Blogs provides snaps and highlights of the rivers I crossed during my walk with Paul.

At walking pace, information is no longer limited to a scroll on the phone screen, and much more becomes visible. This pace also allows for observations that would definitely be missed if travelling at speed in a motor vehicle.

The blinding speed of modern day reality hides a lot. India and its relation with the environment – rivers, in context of this article – see a similar game play out. Large scale interventions are the mood of the day. A billion-dollar package for the “Holy Ganga” is all that matters, while in reality, the river bleeds dry from a thousand cuts made all over its catchment and more – dams, floodplain encroachments, mines – are proposed to great public fanfare.

These cuts will make sense to us only if we understand the idea of interconnectedness. A river is not only a single stream of water that flows, but an ecosystem that is the sum of all that happens in its catchment. That the river is a report card of the health of the catchment is an oft repeated concept.

In this piece, and two others that follow, I intend to share views of smaller, not so popular rivers that I was able to slow down and see while on the above mentioned walk in different geographies of India. This first part deals with the stretch from near Gwalior to the banks of the Ganga East of Allahabad. Of course we will see the popular rivers too. Let’s start with a map of the walk, also showing the popular rivers as well as the overall drainage network.

Here’s a small video clip from this section of the walk, of the rivers we crossed and saw.

Before we started on the trail at this point, we made a side trip to go see the Taj Mahal. So we got to see the Yamuna at Agra and the Chambal en-route.

A group of men relax on the river bank while their buffaloes take a dip in the Chambal. We did see some gharials floating around close by. Photograph from the bridge at Morena. 02/10/18.

A fabulous reading on the Chambal: https://thewire.in/environment/chambal-son-gharial-bansagar

Starting with the walk 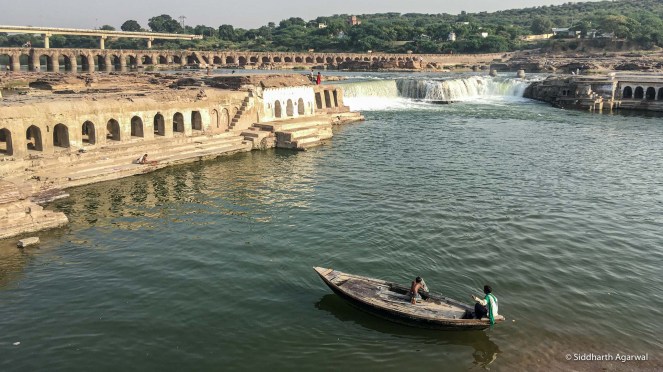 Sindh River at Seondha. / River Sindh originates in Madhya Pradesh near a village called Lateri, and flows North for about 470 kms. It finally meets the Yamuna at an interesting place called Pachnada – or ‘the confluence of 5 rivers’. Rivers Pahuj, Kunwari, Sindh, Yamuna and Chambal. 10/10/2018

River Pahuj at Nadigaon / River Pahuj originates from the South West of Jhansi, and is dammed thrice as it flows North to meet River Sindh at Pachnada (as mentioned before). It is interesting to note that most major administrative boundaries in the region follow along the path of rivers. 11/10/2018 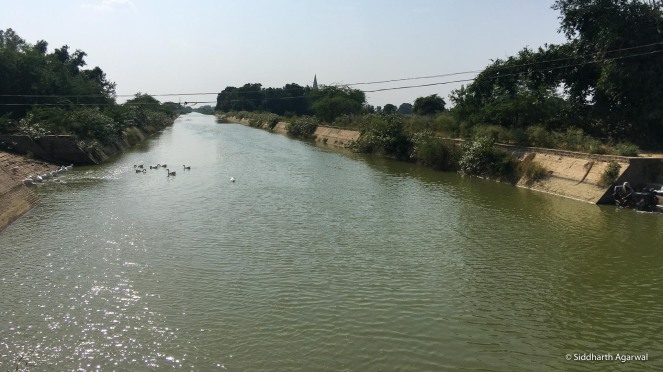 Even before we reached the Betwa, we crossed the waters diverted from the Betwa at Parichha Dam on its left canal. 17/10/2018 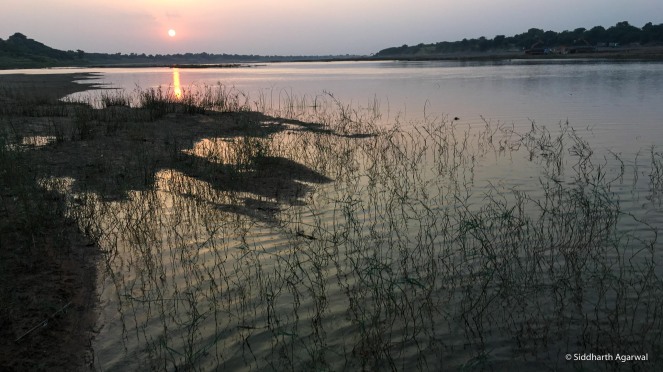 River Betwa at Jitkiri Danda / The Betwa originates from multiple springs in the Ratapani Tiger Reserve close to Bhopal. Dammed multiple times, polluted by industries, and mined indiscriminately for its sand, the river still manages to host a large number of wildlife. It flows North for about 600 kms, before meeting the Yamuna at Hamirpur. More reading on the Betwa: https://sandrp.in/2020/04/07/photo-blog-walking-upstream-the-river-the-betwa-and-its-people/ and http://www.veditum.org/moving-upstream/betwa/. 17/10/2018

The river underneath – An important piece of information that we keep missing is the role of groundwater in feeding us as well as our rivers. These rivers underneath continue to be extracted in large quantities while we scratch our heads on why the rivers as we know them are drying up. These red boxes are easily identifiable all across India, housing pumps to draw ground water for irrigation. 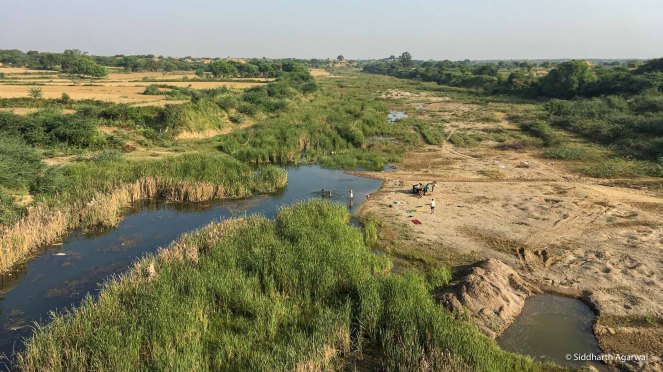 River Virma / A tributary of River Betwa, there is not much literature available about this river. Swami Brahma Nand Dam seems to have been built on this river, and cropping is visible all over the river bed itself along with sand mining. This photo, looking Northwards, was taken from a road bridge close to Bhandur Khurd. 19/10/2018

River Ken at Achraunh Village, Banda District – Locals extracting sand for their use. / River Ken originates in the Kaimur Range, in Rithi Block of Katni district. It flows north, through the Panna Tiger Reserve and meets the Yamuna at Chilla Ghat. This beautiful river is currently threatened by a large scale project called the Ken Betwa River Link Project. For readings on the project, see: https://sandrp.in/?s=ken+betwa 20/10/2018

River Baghain / There isn’t much literature available for this river. It starts in the hills of Panna District, flowing North into Banda District and forming the boundary of Banda and Chitrakut districts as it flows into the Yamuna. This photograph is of a spot close to Baghain’s confluence with the Yamuna. 26/10/2018

River Mandakini or Paisuni / This river with a small catchment area of 416 sq. km flow through the religious town of Chitrakoot, and joins the Yamuna soon after this point where it is photographed. 26/10/2018

River Yamuna at Rajapur, Uttar Pradesh. / One could see evidence of large scale sand mining in this region. The other side of the bridge had many boats docked – typically used for carrying sand. 27/10/2018

The boats described above, on the Yamuna at Rajapur. Looking downstream from the bridge. 27/10/2018

River Ganga at Allahabad, before the sangam (confluence). / You can see pontoons being floated to construct bridges for the then upcoming Kumbh Mela. 01/11/2018

At the sangam. Imagine this as not just Rivers Ganga and Yamuna, but all the tributaries that make up these rivers. 02/11/2018

A Gangetic Dolphin sighting just a few kms downstream of the confluence as we walked along the Ganga. 03/11/2018

The river works differently for different people. A group of young men taking  photos on the banks of the Ganga on a wonderful evening. A day’s walk downstream from Allahabad. 03/11/2018

More stories of rivers from further East on the walk in parts 2 and 3.

Siddharth Agarwal has been walking across India along rivers, trying to document and bring stories of marginalised people and the environment into the mainstream. He can be reached at asid@veditum.org or on twitter at @sidagarwal

[i] For details, see: https://www.nationalgeographic.org/projects/out-of-eden-walk/#section-0