Do you know how much Aam people depends on Environment?

Do you understand what is conflict of interest?

Do you at all get the message from Aam people?

Please immediately remove Moily from MoEF if you do!

On December 21, 2013, Congress Vice President Rahul Gandhi said at a FICCI meeting  (see the video of this clip uploaded by Indian National Congress: http://www.youtube.com/watch?v=URnr8OKTygg),  “Many of you expressed your frustrations with environmental clearances that they are delaying projects unduly. There is excessive 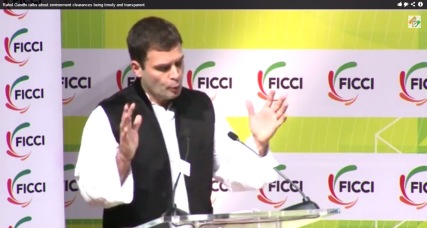 administrative and judicial discretion. The loopholes are so big that you can drive a truck through some of them. Environmental and social damage must be avoided, but decisions must also be transparent, timely and fair.”

Mr Rahul Gandhi, you are right. The loopholes are so big in our environmental regulations that one can drive a truck through some of them. However, this is a grand understatement. The loopholes in our environmental regulations are in fact so big that even whole dams, mines, mountains and rivers can be driven through them. You are right that decisions must be transparent, timely and fair. Have you had a look at the official website of environmental clearances (http://environmentclearance.nic.in/) or forest clearances (http://forestsclearance.nic.in/) or CDM clearances (http://www.cdmindia.gov.in/), all under Union Ministry of Environment and Forests (http://envfor.nic.in/)? Please do go through the website and let us know if you manage to get the copy of the latest (timely) clearances (transparency) or understand how the decisions have been arrived at (fair decisions). Your statements, that too at the meeting of industrialists’ vested interest lobby like FICCI, only shows, sir, that you have been so poorly informed about the functioning of MoEF, to put it most charitably.

On the same day of Mr Gandhi’s statement, the Union Minister of State of Environment and Forests (Independent Charge) Mrs Jayanthi Natarajan resigned and the Prime Minister Dr Manmohan Singh handed over the charge of the Environment and Forests portfolio to Union Petroleum Minister Veerappa Moily. From day one in office at Paryavarahan Bhawan, Mr Veerappa Moily has earnestly started to dismantle whatever little and poor environmental regulation exists in this country. This is disastrous for the people and future of India and also for the future of UPA.

The Prime Minister Dr Manmohan Singh said at his press conference on Jan 3, 2014 (http://www.ndtv.com/video/player/news/pm-rules-out-third-term-says-he-will-hand-over-baton/303780?pfrom=home-topstories), “There were bottlenecks in terms of timely clearances of the projects from the point of view of environmental-forests clearances.” Mr Prime Minister, this only shows how ill-informed you are (again to put it most charitably) or you choose to be.   To give you just one instance, the Expert Appraisal Committee appointed by your government on River Valley and Hydropower projects have not rejected environment clearance a single project in last seven years (for details see: https://sandrp.in/env_governance/TOR_and_EC_Clearance_status_all_India_Overview_Feb2013.pdf). Even when all of the members of the standing committee of the National Board for Wildlife unanimously rejected Wildlife Clearance to Lower Demwe Dam in Arunachal Pradesh for its disastrous impacts on communities and ecosystems in downstream Assam, Jayanti Natarajan, as the chairperson of the Committee, sanctioned it. On Forest clearance also the story is almost same.

Here in rare event when the statutory Forest Advisory Committee (twice) rejected forest clearance for the 300 MW Alaknanda Badrinath Hydropower project, your minister Mrs Natarajan overturned the FAC decision and gave clearance (it should be clear that we are not writing this in defense of Mrs Natarajan’s tenure at MoEF). In another instance, when FAC said no to Kalu Dam near Mumbai in April 2012, a more pliable FAC was put in place and your party Chief Minister from Maharashtra wrote to FAC to clear it and lo and behold, in April 2013 it was cleared! Mr Prime Minister sir, you yourself have gone ahead and laid foundation stone for the 3000 MW Dibang Hydropower Project in Arunachal Pradesh on January 31, 2008, when the project did not have statutory environment and forest clearances, the project still does not have them, because the basic studies have still not been done. All this only shows how off the mark your statements are.

As we wrote in our blog (https://sandrp.wordpress.com/2013/12/21/veerappa-moily-as-environment-minister-has-the-upa-leadership-learnt-no-lessons-from-aap-experience/) on December 21, 2013, the appointment of Mr Veerappa Moily is most shocking and bizarre, showing that UPA leadership  do not seem to appreciate or understand the extent to which poor people of this country depend on environmental resources including forests, rivers, hills and biodiversity. You all also do not seem to understand the issue of conflict of interest: How can Petroleum minister be given the charge of environment and forests?

The petition on this issue (see: http://www.change.org/en-IN/petitions/government-of-india-the-same-minister-for-oil-and-environment-how-is-that-reasonable) has by now been signed by close to 700 people and more people continue to endorse it, I am writing this on behalf of all of them.

Mr Gandhi, while we agree that the decisions need to be transparent and fair, but they also need to be democratic, well-informed and professional, and that means much better Environmental Impact Assessments, people with understanding of environment at the helm of Appraisal Committees and of course, informed participation and consent of the impacted people in the impact assessment and in decision making too, as also credible compliance mechanism in place. That is one of the key messages that we can get from recent events in India, but it seems to be falling on deaf years.

Among other things, this whole episode highlights poor is the understanding of UPA leadership to the signals that Aam people of this country have been sending. You are ignoring these signals at your own peril.

The least we expect you to do is to remove Mr Veerappa Moily from the post of Minister of Environment and Forests and replace him with a credible person immediately. There is of course a lot more you can do if you are really interested in the well being and future of Aam people and environment of this country.