Above: Punatsanghchu River in Bhutan

Bhutan is the only country in the world that measures its development in terms of Gross National Happiness, which includes environmental conservation and preservation of culture[1]. However, Bhutan’s hydropower construction spree in the recent years has increased debt burden on the country. Concerns are emerging over Bhutan’s profligate spending on a single sector without bringing commensurate benefit to its citizens. Hydropower development in the country faces severe risk of climate change effects and has a huge social and ecological cost. But Bhutan continues to develop hydropower claiming that the revenues would fuel economic growth and the loans are self-liquidating. This review of hydropower developments in Bhutan during the year 2015 is based on media reports throughout the year and other publicly available information.  END_OF_DOCUMENT_TOKEN_TO_BE_REPLACED

Prime Minister Narendra Modi has been saying to Nepal and others that Bhutan is a good example to show how a country can prosper from hydropower generation and export. During his trip to Bhutan in June 2014, soon after taking over as Prime Minister of India, he said, “Our Hydropower cooperation with Bhutan is a classic example of win-win cooperation and a model for the entire region.”

However, this hydropower import by India from Bhutan is not a new development. Central Electricity Authority under Union Ministry of Power provides[1], in its monthly reports, power import from Bhutan, these figures are available since 2005-06. END_OF_DOCUMENT_TOKEN_TO_BE_REPLACED

Countries like Bhutan, Nepal, parts of Tibet and parts of India like Sikkim have some lovely Buddhist traditions linked to the nature. On the edges of forests, overlooking valleys and atop majestic mountains flutter tiny colorful prayer flags. Inside Dzongs, fixed prayer wheels spin by the tug of a pious hand. While spinning and fluttering, the prayers are supposed to be disseminated in the universe, reaching every sentinel being.

But there is a third kind of fascinating prayer wheel. It worships not only the creator, but also flowing water. Today, as naturally flowing waters become rarer, it is strangely reassuring to see these wheels spinning away, as the stream pushes the small wooden turbines round and round. These wheels are more fascinating for their symbolic significance: In these regions where water wheels worship the flow, the same flow is being harnessed for generating money and power: Hydropower. In Bhutan, the 10,000 MW + hydropower initiative supported by India and financial institutions like ADB & other foreign players will dam almost all of the big river systems in the country.

In fact, institutions like ADB are so over-enthusiastic in pushing hydropower in Bhutan ( ADB is ‘administering‘ Hydropower grants to Bhutan from countries like Norway and Japan)  that they see Bhutan’s strong environmental conservation practices as ‘hurdles’ in this development. ADB says: “Bhutan’s strong environmental conservation policies have affected the pace of implementing power projects because of the time required to complete procedures such as environmental impact assessments, public consultations, forestry clearances, and road planning.”

What follows is a short photo feature on Water Wheels in Bhutan as well as the hydropower development in the Punatsangchu Basin, through the 1200 MW Punatsangchu I HEP. Just a few kilometers downstream is the proposed intake and dam of Punatsangchu II which is also underway.

Bhutan is the only country in the world which measures its development not only in terms of GDP, but through Gross National Happiness (GNH), which is an aggregate of a number of things, including environmental conservation and preservation of culture.

At the same time, huge, unprecedented hydropower developing is also challenging the tiny nation. Much of it is pushed by India.

Bhutan was in news as it was the first foreign country to which the new Prime Minister Narendra Modi paid a visit in June 2014. While he laid the foundation stone of the the 600 MW Khonglongchu Project, protests erupted in downstream Assam, India. Assam had suffered flood losses mainly in 2004 when the 60 MW Kurichhu Project, built by NHPC, released flood waters which reached Indian territory. Same fears are now expressed for Mangdechu and Konglongchu Projects. On July 9, 2014, The Times of India reported that Assam state BJP unit (BJP is in power at the centre), “They (BJP state leaders) also told Pandey (BJP all-India chief for morchas and cells Mahendra Pandey) that even Modi’s foundation laying for a 600-MW power station in Bhutan last month was not taken with enthusiasm by the people in Lower Assam districts because they were already affected by the impact of existing power projects in the Himalayan country.”

In 2006, India and Bhutan signed an agreement to “facilitate and promote development and construction of hydropower projects and associated transmission systems as well as trade in electricity, through both public and private sector engagements”. Under this agreement, India has agreed to minimum imports of 5,000 MW of hydropower capacity by 2020. The agreement will be valid for a period of 60 years and can be extended. In addition to this agreement, a protocol between India and Bhutan was signed in 2009 through which India will develop 10,000 MWs of hydropower in Bhutan for export of surplus power to India by 2020. This has been going on through a mix of soft loans and grants. This also means services for Indian engineering and design consultants like WAPCOS and Indian developers & contractors like L and T, NHPC, Gammon India, JP Associates, BHEL, SJVN, THDC, Tatas, HCC, Jindal, etc.[1] Indian companies like NHPC, WAPCOS are also involved in Detailed Project Reports, while other Indian companies are bagging the construction and equipment contracts.[2]

Already, three hydro projects funded and built by India are operating in Bhutan which include 336 MW Chukha, 60 MW Kurichu and 1020 MW Tala HEP.  Under-construction projects funded mainly by India include 1200 MW Punatsangchhu HE Project Stage-I, 1020 MW Punatsangchu Stage II and 720 MW Mangdechu HEP. News reports indicate that Bhutan and Indian government have together identified 10 HEPs with a total capacity of 11,576 MW by 2020 for development. In addition the country has about 16 operating HEPs[3].

SANDRP visited the site of Punatsangchu I Project which has witnessed serious geological issues, which include severe sinking of the right bank, throwing the project off schedule and also increasing its cost. Similar geological surprises are also feared at Punatsangchu II Site.

Following are some pictures from Punatsangchu I Site. 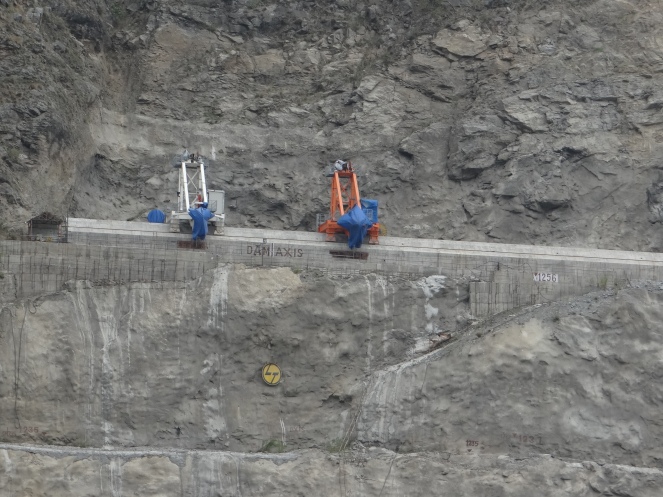 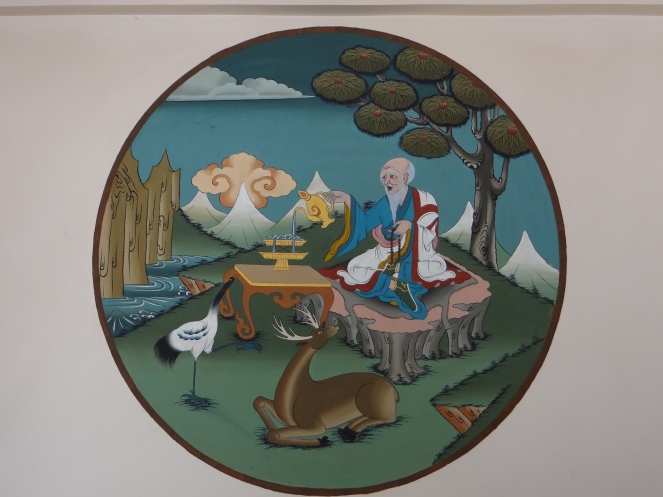 In almost all Dzongs, as well as hotels and homes rests a picture of Six Symbols of Longevity ( see picture above), all of them are interlinked, hold symbolic significance and are supposed to be auspicious.

Let us hope this synergy is long-lived in Bhutan!

( All pictures by author)

[8] ADB pushing for Hydropower in Bhutan, also for storage projects, which have huge impacts! http://www.adb.org/features/bhutan-s-hydropower-sector-12-things-know?ref=countries/bhutan/features