Traditional water sources have been water life line for most of villages in hill areas of Uttarakhand. Known as Panyar, Naula, Chhoi, Dhara these fresh water sources, springs have been serving rural population with potable and other domestic water requirements since time immemorial.  We thought this is possibly an appropriate story on this World Environment Day 2020 on June 5 with appropriately fitting theme “Time for Nature”.[i]

Sadly, with changing time, lifestyle and introduction of tap water facilities these water sources and structures have been facing negligence of users and apathy of government. These time proven water sources can still serve the people if restored and taken proper care by village communities. The story of Pokhri village in Pouri Garhwal district in Uttarakhand is a step in this direction.

The hilly districts in the state are witnessing reverse migration trend particularly of youths migrated to different parts of country to earn livelihoods – in the wake of Covid-19 epidemic and subsequent lockdowns. As per reports over 1.5 lakh migrated natives have returned to the state out of more than 2 lakh who have applied.

Pokhari is a small village located in Chauthan Patti a region comprised of 72 villages in Thailisain block. The village has a population of around 300 and so far about 46 people have returned to their homes from various parts of country.

Most of the around 1500 returnees in the area under quarantine in primary schools have voluntarily engaged in constructive activities. The youth in quarantine of the Pokhari have joined the trend and started cleaning water bodies, plantation work in and around school premises.

In the last week of May 2020, the pipe line based water supply of village got disrupted causing great inconvenience to all. Villagers made all possible efforts, even pleaded to local administration and Upnal  (water) department. However the problem could not be resolved and finally the Upnal staff told villagers that problem cannot be resolved unless a new separate pipeline is laid for the village which would take some time.

Meanwhile, the crisis offered opportunity to villagers to look for their natural water sources. The people serving quarantine and who were out of isolation formed team with villagers and started initiative to restore the two potable water springs, a water structure to feed cattle and an ancient tank structure.

“The springs were surrounded with bushes, due which water supply had fallen, so first we removed the weeds and plugged the leakage to make it accessible and to increase the water supply”, said Hemant Kala who used to work as a driver in Delhi and now actively involved in restoration work.

Before and after images of village Panyara being cleaned and repaired. (Pokhari Yuva Sangthan)

The other group of village youths then saw another small tank which was built around two decades back to feed the cattle. “The chari (tank) was built to collect potable water for the livestock, but it was full of muck and silt serving no purpose. Thick layer of invasive weed pagal jhad (the mad weed officially known as Ram Bansa or Mexican weed) had grown around it. The village youth first cleaned the tank and uprooted the weeds to make the tank usable. Now we are trying to revive the recharge source of the tank to fill it”, shared Vivakanand Kala another youth who was working in private sector in Delhi and had returned to the village during lockdown. 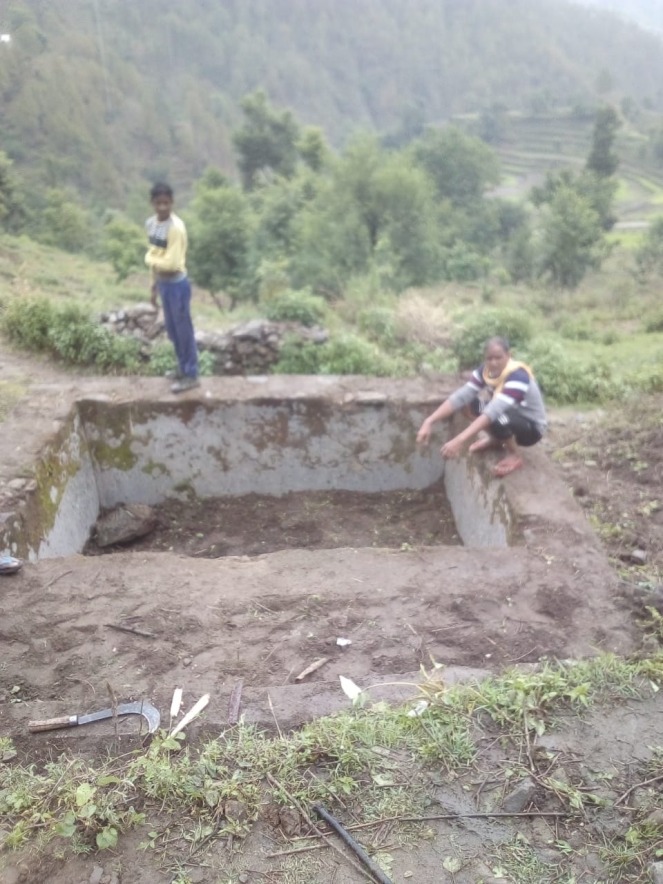 Before and after images of chari structure of Pokhari village. (Pokhari Yuva Sangthan)

The village youth have also formed a local committee namely Pokhari Yuva Sangthan few years back. Vivekanand Kala who also heads the committee says the water crisis has inspired them to take up restoration work of water sources and structures on a priority basis.

The villagers have not stopped at this and turned to one more defunct panyara (water spring). “The structure of panyara had broken down, there was mud all around making it out of use. We first levelled the spot then built the stone structure to channelize the water and now it’s open for all to use” replied Rajesh Kandari who with some local volunteer rebuilt the water structure. Rajesh Kandari has been doing job in Germany and has not been able to go back due to lockdown.

After repairing it, the team including young kids smiled and quenched their thirst with water from the same water source. The restored panyara is close to common path and they say even people passing by can find drinking water there.

“The effort is fully self-motivated and self-financed, we have been given no government aid for the work”, comments Vinod Kumar the village headman who fully supports and even lends helping hand to the initiative. As per him the youths are voluntarily working on restoration of village water structures thus making great effort to find local solutions to ongoing water crisis.

But he has some concerns and questions too. “With great emphasis on toilet building and cleanliness, most of villagers have placed water tanks on rooftops which need to be filled for flushing and bathing purposes. This consumes major share of water supply and it is now hard to live without these facilities”.

Though he is happy with the effort but feels that unlike past now it is very difficult to meet all water requirement through local sources.

Undeterred with the concerns, the village youth committee then took to their oldest water structures known as diggi panyara. Diggi is commonly referred to tanks built to supply potable water when the state was part of undivided Uttar Pradesh.

“Disconnected with the water source, the tank had dried up, so we cleaned it, tapped the original water source again by laying a 6 meter long pipe and now it is getting adequate water supply” says a joyous Surendra Bhandari who works in Delhi in leading newspaper as web designer and is also part of the village committee.

As per Surendra Bhandari natural water sources are a boon for hilly people and cannot be compared with pipe water in taste and quality. “They serve cold water in summer and lukewarm in winter, elderly still prefers panyara water over tap supply” adds Surendra.

He also stated that during quarantine, they faced water scarcity for eight days and the ongoing crisis helped them realize the significance of natural water sources hence their team is determined to restore all of them.

The team feels that in the process of development, the traditional water sources have been neglected and they deserve better attention and awareness particularly among village communities.

To resolve pipeline supply issue, the villagers have today (June 04, 2020) convened a meeting with concerned officials. “Our village is supplied water with single pipeline with neighbouring uphill village. With increase in demand, a single pipeline cannot meet the requirement”, shares Manoj Kandari, a village youth returned to village form Dehradun where he was preparing for a NIT Lecturer job.

“But now we would not let our traditional water sources die for want of our attention” says Manoj Kandari who is currently serving quarantine period and keenly waiting to join hands with other youths.

Amid uncertainties over lockdown and jobs, the young people have taken to farming activities. “It’s paddy season which needs irrigation. So the youth have started cleaning and repairing their kools (smaller traditional irrigation channels) and smaller canals. Again all the collective efforts are purely on shramdaan basis where the villagers and committee are sharing the cost of pipes, cements etc”, says enthusiastic Hemant Kala.

The initiative by youth of Pokhari shows that with little efforts and work, local water sources can be restored. We wish them all the success and hope youths in other hilly areas would feel motivated to start work for restoration of their natural water sources and traditional water structures.