Major Issues faced by Rivers of Maharashtra include complete lack of governance geared towards protecting rivers as ecological systems, unjustifiable dam projects blocking most of the rivers of the state without even comparable benefits, increasing water conflicts, depleting groundwater levels which affect base flow of the rivers, catchment degradation, climate change induced changes in river hydrology, repeated droughts and increasing levels of pollution.

Adding to this, the recent Jal Yukta Shivar Mission, or water rich village mission too has failed to understand the ecological importance and characteristic of rivers and is deepening and widening rivers and streams haphazardly in the name of ―rejuvenating‖ rivers. Example to demonstrate this is Manjara River, tributary of Godavari in Latur district of Marathwada region. River restoration happening and being planned in urban areas is no different and is concentrating around infrastructure-centric solutions like construction of Ghats, channelization of rivers and encroachment upon the riverbed. Example of this is Pune River Restoration plan and Godavari Restoration Plan in Nashik.

Maharashtra boasts of the highest number of large dams in the country and yet has the lowest proportion of irrigated area. In its tryst of putting up some of the most inefficient dams in the country, the state has succeeded in blocking ecologically important rivers, submerging forests and affecting livelihoods dependent  on river flows. This is most starkly highlighted in the case of dams in Konkan region of the state, where all of the dams are located in the biodiversity rich Western Ghats as well as Vidarbha region of the state where dams like Gosikhurd, which are mired in corruption and inefficiency are not only a waste of public resources, but also affect some of the last remaining intact forests of the state.

The State Water Policy gives low importance to water for environmental needs and does not make any mention of eflows (Environmental Flows). Although the Maharashtra Water Resource Regulatory Authority  (MWRRA) had constituted a committee to recommend eflows for rivers in Maharashtra, it could not be completed as the MWRRA itself ceased to exist in May 2016, since past members retired and new members are still not nominated by the Government. 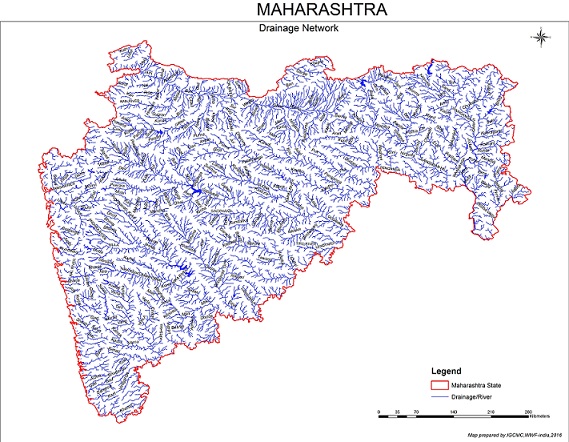 Water Conflicts in the state are increasing surrounding Godavari and Krishna Basins. These conflicts have culminated not only in battles in High Court, Supreme Court and the MWRRA, but unrest and strife in  agrarian community of the same basin, mistrust and volatile atmosphere within the state. Predictably, water sharing decisions, be it by the courts of the MWRRA, revolve solely around water and do not consider the health of the river or the catchment, which is the main issue.

Groundwater in areas like Marathwada is at an all-time low. Unregulated groundwater abstraction has affected base flows of rivers in Marathwada adversely. However, this link between groundwater and health of rivers is discounted completely in the race to harness ―water‖.

According to Central Pollution Board Report (2015), maximum polluted riverine stretches in the country fall in Maharashtra. The National Green Tribunal had ordered an exemplary fine of Rs. 100 Crores in 2015 for remedying pollution of River Ulhas in Mumbai. The state has also scrapped a 20 year old Policy on siting of polluting industries next to river banks.

While there has been considerable media and public attention towards dam scam, repeated droughts and issues plaguing irrigation in the state, rivers and ecological systems like wetlands, groundwater aquifers, headwaters, catchment, estuaries, floodplains etc., have been entirely neglected in the planning framework. Neglecting rivers and their associated systems does not bode well for water resource management of the state.

When rivers in Maharashtra are assessed against criteria which affect river health in terms of lateral and longitudinal connectivity, pollution, groundwater levels, vegetal cover, etc., the picture which emerges is worrisome. It is seen that all major rivers have lost longitudinal connectivity many times over and are  classified as Red (severely threatened) rivers. There are some exceptions to this in form of free-flowing rivers, which still exist and need maximum protection in the state. These include west flowing river like Shastri, tributaries of Wainganga in Vidarbha like Kathani and Khobragadi or tributary of Tapi like Sipna.

Vegetal cover in all rivers, except the ones in Western Ghats and Vidarbha is either severely threatened or threatened. Even in Western Ghats and Vidarbha, it is depleting fast. Groundwater abstraction in basins in Marathwada has reached unsustainable proportions. Riverine stretches near all Tier I and Tier II cities are polluted. According to the matrix, Rivers Bhima and Krishna are severely threatened, while some rivers like Sipna (tributary of Tapi) and West Flowing rivers are relatively better protected.

This is indicated in the matrix below. 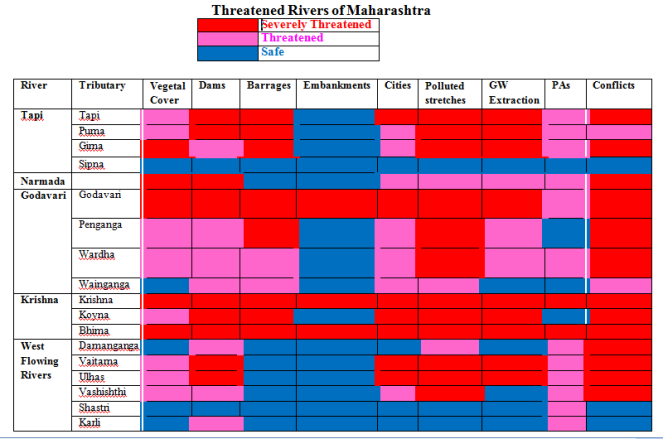 You may also like to see  Rivers profiles of Rajasthan ; 2 West Bengal; and North Eastern States