In April 2016, the Central Government presented Wetland (Conservation and Management) Draft 2016 for comments which has been vigorously contested by leading experts as deliberate attempt to weaken key steps of Wetland (Conservation and Management) Rule 2010. Various organizations, community groups, NGOs including SANDRP has objected to the dilution of key norms and urged the government to discard Draft 2016 Rules and fully implement the 2010 Rules till new effective wetland protection rules are formed.

Now, highlighting the neglected state of our wetlands, SANDRP again urges the responsible authorities to come forward and take steps to protect a thriving wetland which is facing threats from none other than Government itself.

Naya Bans Wetland The Holambi Kalan and Khera Khurd are among several villages dotting North West Delhi’s agriculturally dominated landscape. Between the Railway Station of these two villages lies a flourishing wetland spread on the either side of the railway track which has intercepted two local storm water drains passing though the area.

Whether the area was originally a wetland or the interception of rain water carried during laying down of railway lines has resulted in accumulation of waste water is unknown. Yayati Bhardwaj a resident of nearby Alipur village recalls his childhood days when he used to frequent the area to have a glimpse of Lotus like flowers blooming in the wetland which now has disappeared. The 32 years old youth raising voice for local environmental issues still remembers his father talking of the marshland on few occasions. So the marshy land may or may not be artificial but over the time it has evolved into a living wetland in concretized capital providing refuge to large numbers of flora and fauna.

The 2 kilometres long linear shaped wetland, let us call it Naya Bans wetland, since much of its area belongs to Naya Bans village, which was historically called Iradat Nagar village.  The railway lines has double track and the width of wetland is approximately 8 meters in total. Domestic waste water from many nearby villages is entering the area via storm water and local drains. The furtherer land on both sides is under cultivation and dozens of fish farms have also come up quite close to the wetland making it a flourishing eco-system.

During a day long site visit on May 31, 2016 at least 31 types of water and terrestrial birds were seen in and around the wetland. Besides avian presence, the site is inhabited by wide range of herbs, shrubs, reptiles and butterflies. 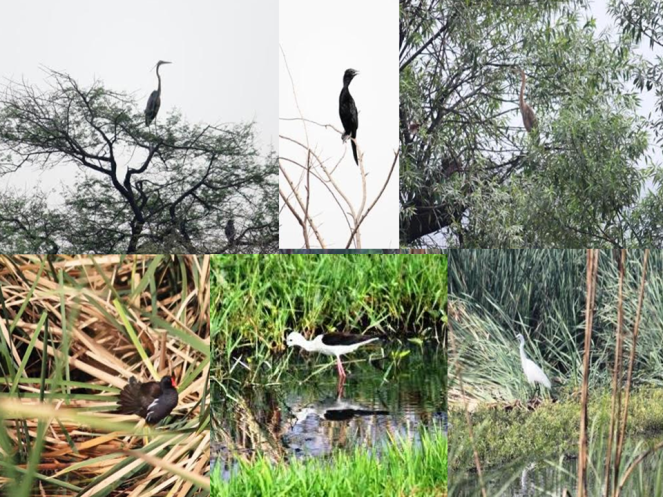 One can see weaver birds in group hopping playfully and weaving nest and feeding their offspring inside cattail cluster while wading birds busily moving around in search of food in shallow water. The sweet call and brisk flight of small chirpy birds like perinea, chats and tailor birds is pleasing and their bigger comrade bee eaters, bulbuls quietly hop on adjoining bushes and shrubs. Drongoes and coucals though less in number appear scanning though the reeds and weeds whereas the large predatory birds like herons, darters had themselves hidden inside foliage of few remaining trees and a group of black kites have selected a tree stump to perch atop for a break before the next hunting session. And watching a pair of Saras Cranes treading majestically in nearby fields is quite delightful.

A variety of grasses and weeds covers the area. While typical reeds look standing vigilant at the periphery; cattail, water hyacinth and other native wetland grasses appear taking turn to dominate the wetland according the composition of the pollutants coming in through storm water and local drains.

Threats to Naya Bans Wetland While the wetland deserves research, a number of threats are looming large over its existence. The first and foremost is construction of a lined drain to channelize domestic waste water from Khera Khurd village into nearby storm water drain. Currently a large segment of drain has been built and the rest is scheduled for completion in coming months. The under construction drain runs parallel to railway tracks, thus the wetland and the project eventually will drain out the water from the wetland into bigger storm water drain that finally will reach Yamuna River, thereby increasing the pollution load in already grossly polluted river.

Over the time the area of the wetland has shrunk greatly due to reclamation by farmers and encroachment by local construction. Huge amount of solid wastes, discarded by surrounding villages and Indian Railways also finds its way in the wetland. Farmers occasionally set the wetland vegetation on fire which destroys the habitat of birds.

With a thoughtful planning government and farmers can reap rich dividend from this unique characteristic of the wetland.

Polluted water entering the wetland on left, which appears remarkably clean at the exit point on right (Photos by Yayati Bhardwaj)

Can this wetland be saved? Given the existing and potential environmental services and diverse number of dependent flora and fauna of the wetland; Naya Bans wetland is of great ecological importance. For decades it has been treating waste water in huge quantity which may otherwise end up polluting River Yamuna.

During torrential rain events, which are more pronounced due to climate change, the wetland could prove buffer to surge of floods. Protecting and enhancing the capacity of the wetland can provide treated water to fish and agricultural farm thus conserving the fast depleting underground aquifers.

Notably the wetland is located at a good distance from the human habitation thus posing no risk of mosquito borne diseases. The railway tracks have also been laid at a safe height and the railway department has built a sturdy carriageway to allow passage of excess waste water to other side. There has been no incidence of the wetland causing any apparent damage to the railway property either.

As Indian Railway is in possession of the land both Central and State Governments can work in coordination to exhibit their genuine concerns (which is under suspicion due to dilution of wetland protection norms presented in Wetland (Conservation and Management) Draft 2016) towards protection of the Naya Bans wetland. However, seeing the rapid construction of lined drain as looming threat the wetland require immediate intervention. Will it get?

with sincere thanks to Ishan Kukreti (ikukreti@gmail.com) and Yayati Bhardwaj (yayatibhardwaj@gmail.com) for valuable inputs and lovely pictures and specially for providing company during visit and walking under burning Sun for 5 KM on May 31, 2016

4 thoughts on “An undiscovered wetland thriving under looming threats”