At a well attended India Rivers Day 2015 function held at the INTACH auditorium, New Delhi on 28th of November, 2015, Delhi Water Minister Kapil Mishra declared that he personally takes the responsibility for ensuring that Yamuna will have bathing quality water in three years. He also made it very clear that Delhi does not any more water from external sources like Renuka dam or Sharda Yamuna River link. He also said that his government has asked Delhi Jal Board to shelve its Rs 20 000 Crore Delhi Sewerage master plan and in stead work on decentralized sewage treatment and recycle plan and welcomed suggestions from all concerned, how to make this possible.

The India Rivers Day Function brought together several individuals and organisations who have been working on the issues of river conservation in the country. Following the success of last year’s first ever, India Rivers Week held from 24-27 November 2014, the consortium of NGOs including WWF-India, INTACH, SANDRP, Toxic Link and Peace Institute have also organized an exhibition on the occasion that showcased the past, present and (desirable) future of the river Yamuna, the exhibition was inaugurated by Shri Kapil Mishra and will remain open to public at INTACH for the next two days (Nov 29-30).

Anupam Mishra speaks on Science of Rivers In memory of late Sri Ramaswamy R. Iyer, Late Honourable Chairman, Organizing Committee of the India Rivers Week 2014, a lecture on “Science of Rivers” was delivered by Sri Anupam Mishra, Gandhi Peace Foundation, who is well known for his advocacy on prudent use of our water resources through numerous ways, including his most famous books: Aaj Bhi Khare Hai Talaab and Rajasthan Ki Rajat Bunde. Sri. Mishra, spoke on the value of time-tested systems of water management and the need to promote the use of indigenous knowledge to solve water problem instead of gigantic and destructive schemes like interlinking of rivers. In his speech Mr. Mishra said that “It is important to acknowledge that rivers have the right to flow and live. We need to change our attitude towards rivers. Yamuna as a river is supposed to flow and our society needs to start appreciating the role Rivers play in our lives. ” 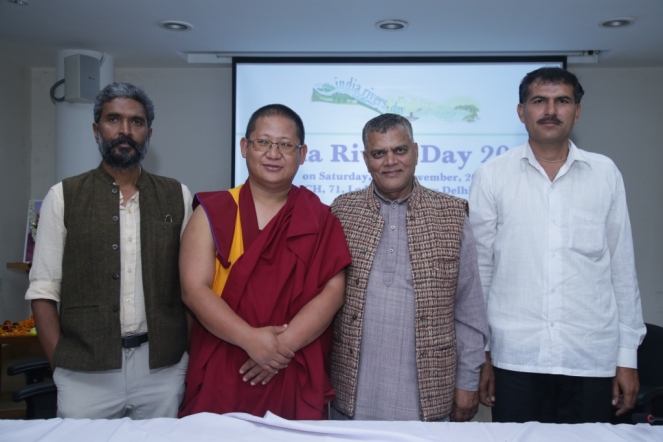 Save Mon Region Federation for their exemplary work to safeguard the integrity of the River Tawang and Nyamjangchhu (Arunachal Pradesh). The land with seven rivers and home to the ethnic Monpa tribe was off late being threatened by 15 proposed hydropower dams to develop 3500 megawatts (MW) power, the chief ones being 600 MW Tawang 1, 800 MW Tawang 2 and the 780 MW Nyamjangchhu projects. The project clearances had been expedited at the cost of social, cultural and environmental needs. Buddhist Lamas (monks) led the protests against the destructive projects under this Federation to protect the river at great risk and repression. Lobsang Gyatso, General Secretary, SMRF received the award on behalf of Save Mon Region Federation. 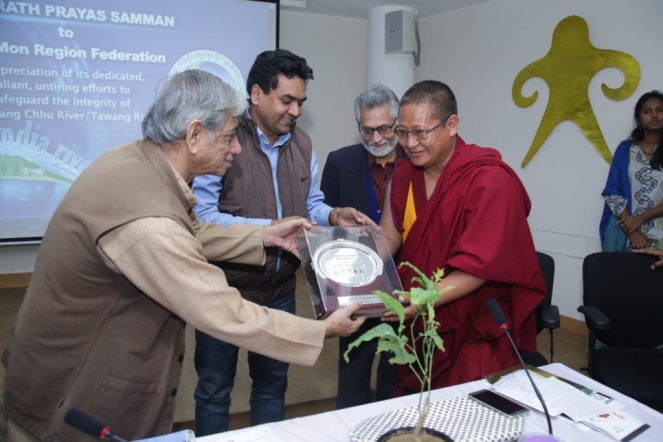 Sachidanand Bharati, of Doodhatolli Lok Vikash Sansthan (Uttarakhand) was awarded for his dedicated work on rejuvenating river Gad Ganga. Bharati, an eminent environmental crusader, had been organizing women into groups of green police, the Mahila Mangal Dals, to create and protect forests. He had also worked on reviving River Gadganga by combining people’s knowledge of traditional water management system through construction of over 20000 chaals and khaals. 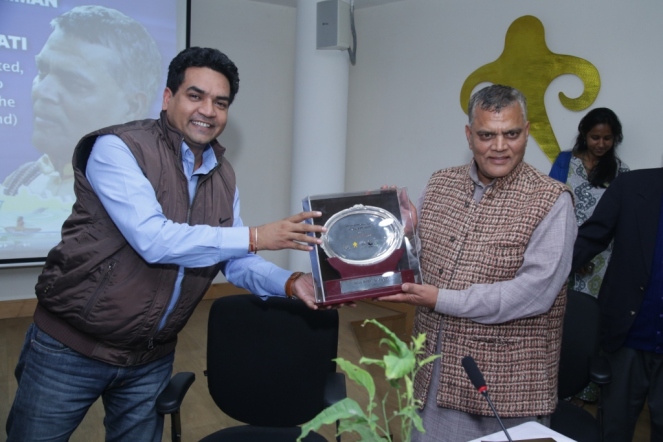 Sambhaav Trust for their work on revival of River Nanduwali in Alwar under which a group of 17 villages decided to focus on conservation of forest, land, water and livestock and through the effort rejuvenated Nanduwali rivers, which was once dry. The work is now being sustained through the steam of the people, without any funding. 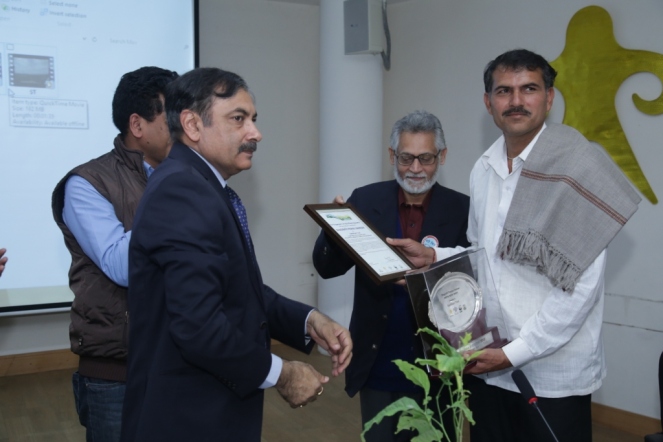 Emmanuel Theophilus was awarded for his work on protecting the integrity of River Mahakali in Uttarakhand. He had recently done an epic voyage along the Ganga where he travelled nearly 2000 kilometers of the river. He had recently worked on a report for SANDRP titled ‘Headwater Extinctions’ which looked at impacts of hydropower dams in Upper Ganga and Beas Basins on fish and riverine ecosystems. 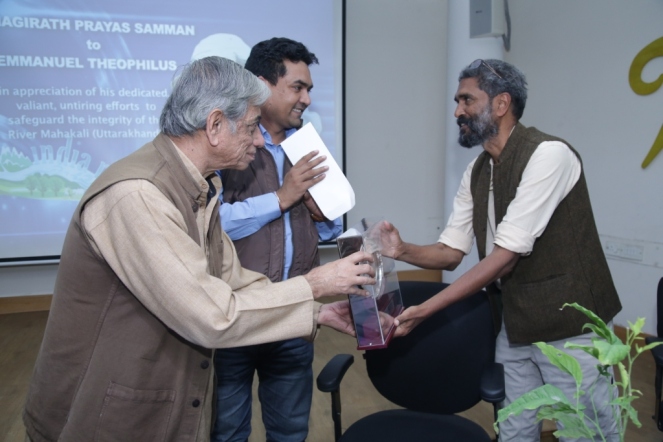 A noteworthy part of the meeting this year was participation of children from three different schools of Delhi, who asked Minister Kapil Mishra questions about the state of Yamuna River and what the government is doing about it. Mr Mishra answered the questions of the school children and also other participants and emphasised that it is only when people get connected to the river that it will be possible rejuvenate Yamuna. He underlined the role of children in this effort. He welcomed the celebration of India Rivers Day, though expressed worry that this shows how bad is the state of our Rivers. 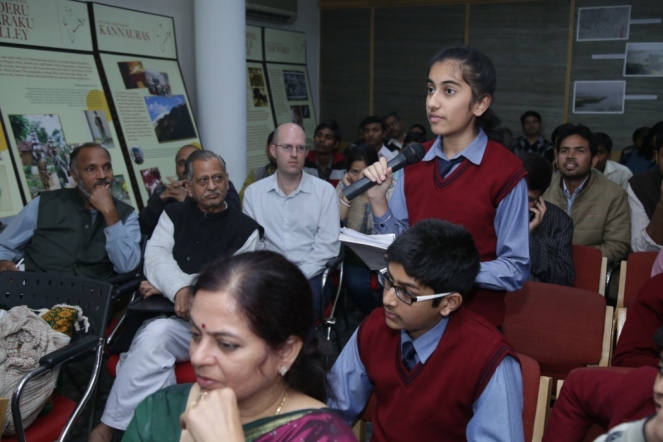 Shri Shashi Shekhar, secretary, Union Water Resources Ministry, who was to preside over the meeting, could not come due to ill health, but has sent a message welcoming the efforts of the organizing committee and wished the meeting all the success.

“Rivers shows us a reflection of our cities. The time has come. Mindsets are changing, governments are changing in accordance. A changing Yamuna is therefore bound to reflect changes in the city. It is not an easy task but we are ready to take risks. Likeminded people have started to run the show now and I truly believe that together all this positive energy is sure going to bring about a positive change and will help us save the river” said Shri Kapil Mishra, Minister of Water, Tourism, Art, Culture and Gurudwara Election, Government of NCT, Delhi. 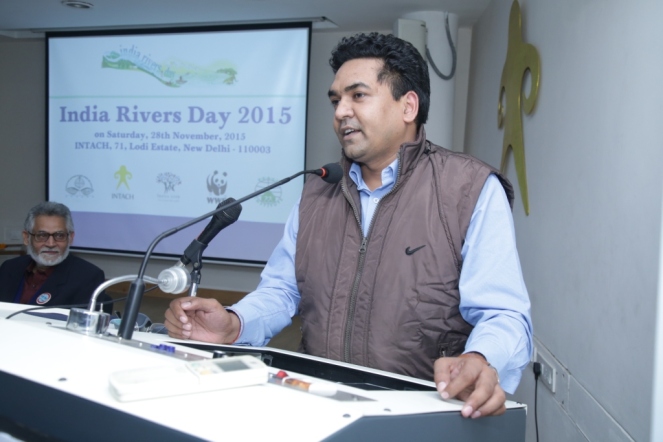 The organizing committee has ensured that they would like to continue this annual effort and will welcome suggestions from all concerned about the meeting and also about the nominations for future BPS awards. The house was addressed by the following speakers from amongst the Organising Committee: Manoj Misra (Yamuna Jiye Abhiyaan), Jayesh Bhatia (PEACE Institute), Suresh Babu (WWF-India), Himanshu Thakkar (SANDRP); Manu Bhatnagar (INTACH) and Ravi Agarwal (Toxics Link).

PS2: Message from Pune: “We had an amazing response for the India Rivers Day special River Walk. The following link has a few pictures from the day:https://www.facebook.com/MuthaiRiverWalk/posts/553440611474742”