Above: Latha with her friends at Athirappilly Falls. Photo: Parineeta Dandekar

It is difficult for me to write impersonally about the work of Bhagirath Prayas Samman recipient Dr. Latha Anantha. She is Latha Chechi to me, a close friend and more of a sister. The bond is based on water and rivers, possibly stronger than blood. This is only an attempt to introduce the readers to the exemplary work of Latha Chechi (and that of the River Research Centre and Chalakudy Puza Samarakshan Samithi team) as the recipient of the first Bhagirath Prayas Samman for “exemplary capacity for combining sound research with the mobilization of community, political and state agencies, and for ushering in a unique methodology of consensus- based conservation of rivers in the country’”. 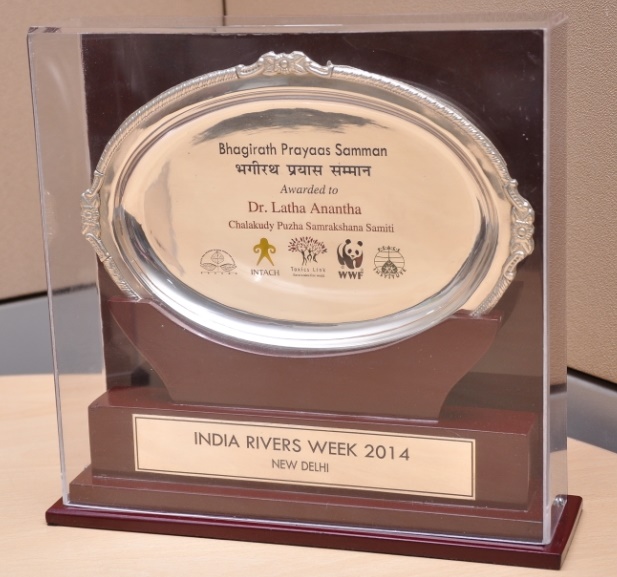 Latha is an agricultural scientist by education and holds a doctorate in the subject. But how did she start working with rivers? In 1989, Latha was a part of a nature camp which took her and many like her into the Silent Valley National Forest. Then, Silent Valley National Forest was declared as a protected area only 4 years back after protracted, and possibly one of India’s foremost anti-destructive dam struggle, led by people. (A fascinating account here )

It was here that, under the guidance of Dr. Sathish Chandran Nair, Latha saw that while forests of Silent Valley are the birth place of beautiful river Kunti, Attapadi region was devoid of forests and most streams were dried up. The Bhavani river was hardly flowing there. The contrast was self revealing. It was here that the connections between forests and water and rivers and tribals and wildlife were forged. She says she was a changed person after witnessing all this.

In 1995, Latha married Unnikrishnan, also an ardent river lover and activist (and a poet!) and together they conducted several nature camps for children and young adults all over Kerala, always coming back to the Chalakudy River and her thick forests near Vazachal and around. By then, she had made friends not only with the river, but with the Kadar tribes who lived with the Chalakudy, on her banks, one amongst them was young Geeta. The learning and exploring continued for a few years, until in 1998 they heard that a dam project on Chalakudy, the Athirappilly dam, had received sanctions from Delhi. They were shell shocked. Back in 1998, this couple and their friends like Ravi, in a remote part of Kerala knew nothing of EIA Notification, sad monotony of sham EIAs, compromised EIA agents, project-friendly meetings at MoEF, nothing. But they persevered.

Helped by stalwarts like Dr. V.S Vijayan, Dr. Sathish Chandran Nair, this tenacious group slowly put the jigsaw puzzle together, piece by piece. They understood the EIA Notification of 1994, got hold of the EIA and saw how the Kadar tribe, living just by the river was not even mentioned. They say how the fact that Chalakudy was already dammed six times before it comes to Athirappilly and how 35% of its flows are already diverted was hidden from the EIA. .Kadar tribal settlement was mentioned incorrectly outside the project impact area. Latha by then also realized that the mandatory public hearing was also not conducted for this project.

Now there was no stopping this group, which also included hydrologist Madhusoodan and botanist K Amitha Bachan. Ravi and Unni filed a case in Kerala High Court in 2001, challenging the EC granted to Athirappilly and Latha & team did all the research, putting together a water-tight case. The court ruled in favor and asked for a fresh public hearing.

Latha and friends already had strong ties in the Chalakudy region. This was not a single day affair, but a trusted relation built over years. The tribals knew this team’s love for them and their river. They listened and they discussed. They were aghast at the dam building plans. The public hearing saw overwhelming participation not only from the tribal communities, but from scientists, shop keepers, hotel owners, farmers, gram panchayat members, etc. The District Collector witnessed this and would not push the project until a river basin study was done, possibly the first such in India.

There was a lull in the meantime, giving a false sense of security for these Chalakudy lovers. But it also gave them time to get introduced and work with friends like Himanshu Thakkar from South Asia Network on Dams, Rivers & People (SANDRP), Shripad Dharmadhikary from Manthan with whom they had been in touch for long, supporters like Dr. Ramaswmay Iyer, etc. Through SANDRP, in 1998 itself, the group had made submission to the World Commission on Dams opposing the Athirapally project. The CPSS, in collaboration with SANDRP, organized a meeting on the report of the World Commission on Dams at Thrissur on June 22-23, 2002.  A meeting against Interlinking of Rivers in Kerala was organized by CPSS and SANDRP on July 12-13, 2003. A book “Tragedy of Commons: The Kerala Experience in River Linking” was published in 2004 by River Research Centre & SANDRP.

But Athirappilly dam plan put up its head again in February 2005 when the project gained Environmental Clearance through back door from the MoEF. This time the EC was challenged by none other than the young Geeta, the Kadar woman, living on the banks of the Chalakudy who filed a PIL in the High Court of Kerala in April 2005 challenging the new Clearance granted to the project. The Athirappilly Gram Panchayat President also filed a PIL on EIA violations. The High court again upheld the plea and ordered for a public hearing afresh! This public hearing in 2006 witnessed massive turnout of the tribal community members.

In the meantime, Latha also wrote to Jairam Ramesh to intervene in the issue and Unni and Lathachechi met him personally when he was in Kochi. He issued stop Memo to KSEB on January 4th 2010. After this KSEB again approached MoEF. Once again PIL was filed in HC challenging the EIA in 2007 and is still pending in the HC.

This proposal was again recommended environmental clearance by the Ministry of Environment, Forests & Climate Change’s Expert Appraisal Committee (EAC) on River Valley Committee in their meeting in May 2007. However, following directions by Kerala High Court to KSEB, the project came back before EAC in March 2010 and was again discussed in April 2010 and July 2010, till when no conclusion could be reached by EAC and EAC had asked for more information and clarifications. There is no mention of the project in any of the minutes of the subsequent EAC meetings[1].

Since then there has been a lull on the plans though it has not died out completely. River Research Centre, though existing since many years back informally, was formally registered as a Trust. RRC, Chalakudy Puzha Samrakshan Samiti and Latha’s dedication is one of the strengths of Athirappilly waterfalls, which would have been dammed and dried long before if it was not for this people-led, nonviolent struggle.

Latha was simultaneously working on campaign against the proposed Pathrakkadave HEP across Kunti River near Silent Valley National Park on several angles such as community mobilisation, EIA, Public hearing, etc. The very destructive dam project has been stalled and the public sentiment and pressure is very big on this project as not to build the dam.

Since early 2000, she has also been involved in education program for children along the banks of the Chalakudy River. RRC and the Schools for Rivers program were instrumental in forming a ‘Kuttikoottam’ (meaning a group of children) of more than 50 children aged between 10-20 years who would set out to know more about their panchayath, its natural resources, human resource potential, culture, folklore, institutions, governance, destruction of environment, problems faced by the river and related livelihoods etc. ( More on it here)

While working on environmental governance and advocacy, CPSS has also worked on novel and promising initiatives like Reservoir Reoperation Model. The project is steered by CPSS and Forum for Policy Dialogue on Water Conflicts in India of which Latha is a Steering Committee member.This model is specifically aimed at dammed rivers, where impacts are supposed to be a way of life. In the much-dammed Chalakudy, RRC, with its dedicated members like Ravi and others demonstrated how operations of a hydropower scheme can be and should be changed to maintain summer irrigation in the downstream and also rudimentary flows for the river. This is far from perfect, but a great step in the direction. At the heart of these processes is joining the dots and bringing people together: from power company, irrigation department, farmers, local self-governments, etc. In April 2013, the CM of Kerala agreed to increase the off peak generation of Poringalkuthu Left Bank Hydro Electric Project. More on this here.

Latha also played an active role in the Save Western Ghats Movement group. In a meeting of this group  Kothagiri in Keystone Campus,  Environment Minister Jairam Ramesh made the announcement of Western Ghats Expert Ecology Panel, after relentless advocacy by the group, including Latha. The subsequent Panel under the leadership of Dr. Madav Gadgil and what followed had deeply affected the environmental discourse in India. The way MoEF and government of India hid Gadgil report was a shameful, underlining the unwillingness of the administration to take any visionary or long term actions towards people-led environmental governance. Along with organization like Goa Foundation, RRC was a part of the petition filed in the NGT against this opacity and for implementation of the Gadgil Report. The court ordered the MoeF to bring out the Gadgil report. The din that followed, especially in Kerala, was massive and bewildering.  Gadgil Report was then subsumed to the problematic Kasturirangan Committee, which decision itself was flawed. Powerful interest lobbies, including religious groups, did not miss a single opportunity at misleading locals about eco sensitive areas. If Western Ghats was tense, Kerala was in the eye of the storm. At this juncture, Latha chechi came out and wrote about Kasturirangan Committee report as one of the reason for political polarization for Kerala, and asked for a sane and democratic approach through the Gadgil Report. Latha organised meetings as well as participated in many meetings and debates organised on the subject all over Kerala.

She has also been working endlessly on the issue of eflows, from upcoming as well as existing dams and has engaged consistently with the MoEF on this. Way back in 2009 RRC, along with SANDRP and Svaraj organized the first consultative National Workshop on Eflows. She has also co-authored the first Primer on Environmental flows, aimed not at scientists, but at community groups and activists who are more likely to urge for the implementation of the concept of eflows. (http://www.internationalrivers.org/files/attached-files/eflows_primer_062012.pdf)

While keeping a balanced, soft spoken and people friendly stand she has not shied from criticizing consultants like NIH and CIFRI for their shoddy eflows assessments. She has served on several government appointed committees in Kerala and has been a resource person for countless programs on rivers and forests. She also serves as the South Asia Advisor, International Rivers and is the Ashoka Fellow, 2012.

Latha’s story, intrinsically linked with River Research Centre, CPSS, Chalakudy River and beyond is a story of soft spoken courage. It is a story of bringing people together and looking at a river as a shared heritage, not only as a part of a conflict.

Today, Latha is undergoing a challenging time physically, undergoing several rounds of treatments. But mentally, she is the same strong and sensitive river woman of the Western Ghats.

She is a natural recipient of the Bhagirath Prayas Samman and we look forward to having her back with us soon in her full form:  singing, laughing and loving rivers as she does..