The Ramganga multipurpose project[1], from the point of view of the government, is an eminently successful project. From the date of its commissioning in 1974, government reports declare that it has been fulfilling its stated objectives[2]. These were to bring an area of 5.90 lakh hectares under irrigation, control floods downstream, supply 5.5 cumecs to Delhi and generate 451 million units of power annually.

A data-based examination of each objective and whether it has actually been met by the project is outside the scope of this article, which presents the stories of people whose experience of the dam differs substantially from the ‘official’ version. These histories were gathered during several rounds of surveys and interviews with people living along the Ramganga at Kalagarh and Harewali.

Kalagarh is where the main storage dam of the Ramganga river valley project is located. The people of Kalagarh have only one reaction when it comes to the river- fear. Deveshwari Devi of Kalagarh described the situation of the people of her town as ‘The dam has brought us no benefits, only losses. Dia tale andhera. It is always darkest beneath the flame.’

The residents of Kalagarh and the neighbouring villages earlier approached the river for fishing, cutting grass, collecting wood, and farming. Since 2010, a fear of the river has brought all activities to a halt, says Nabab Ahmed who has not fished in the river for the last four years.

23 kilometers downstream of Kalagarh is Harewali barrage. The people near this barrage find their lives entirely governed by nebulous ‘authorities’ with total control over their lives and livelihoods.

Just a generation ago the farmers of Bhagota harvested three crops a year. These crops were a diverse array of grains such as wheat, rice and corn, along with sugarcane and vegetables. The Ramganga would bring in silt with its annual floods and replenish the fertility of the soil. The same floods would also recharge the soil’s moisture. In addition to the crops, people harvested the fish that made their way up and down the Ramganga as per their breeding cycle. This quiet and self-sufficient life was shared by many other villages including Parmawala and Shahajahanpur.

In the middle of the 1970s, life changed drastically. The villages were divided into ‘upstream’ and ‘downstream’ of the barrage. Like the world ‘through the looking-glass’, they now lead lives drastically opposed to each other.

The Harewali Barrage impounds the water let down by Kalagarh dam and diverts it to the Khoh river, from where it is taken to the Upper Ganga canal system. Confusing, isn’t it? This confusion pales in front of the upside-down river cycle that the people of Bhagota, upstream of the barrage, are subject to. From 15 November to 15 June, the barrage gates are closed and the people’s farmlands are flooded. This effectively does away with the Rabi and summer crop seasons. What is left is paddy cultivation during the Kharif season, and even that is at the mercy of the Dam gods. Often, the dam authorities do not open the dam gates till long after the scheduled 15 June date. This means that the farmers lose out on the sowing period. Similarly, often the gates are closed before the middle of November, which means that they lose the harvest.

Fishing is no longer as per the migratory cycle of the fish, but as per dam releases. When Kalagarh opens its gates, the fish from the reservoir are washed downstream, only to be trapped at Harewali. Thus, the fish upstream of Kalagarh are isolated, their breeding rhythms broken. Just a generation after the building of the dams, the fishers are already seeing the impact of this isolation of the fish breeding populations. Fish sizes have decreased, and the relative proportions of different species are changing.

The agricultural cycle of the downstream villages of Shahajahanpur and Parmawala is forced to move on a diametrically different level. For them, the months between June and November are a time of intense floods. They are well able to live full flows during the ‘chaumasa’, the monsoon. What causes them distress are the unannounced releases prior to and after the chaumasa. They confirmed the Bhagota residents’ claims that releases outside the scheduled dates cause great damage to crops.

‘Paalej’ farming is the cultivation of cucurbits- melons, gourds and cucumbers- along the silty banks of the river after it recedes post-monsoon. This crop is sown immediately after the monsoon as increasing areas of the banks emerge from the river, and harvested in the summer before the floods come. Now, often unexpected releases come in the late monsoon, or early in the season. Razia, a paalej farmer, sowed the fields she rents from a landed farmer three times in 2013- and lost the crop anyway. Further, the dam has altered the sediment characteristics so that instead of bringing in fine silt the river brings in coarse sand. This decreases yield even further. Razia is the last of the Paalej farmers in her village. People no longer practise what they term a gamble. 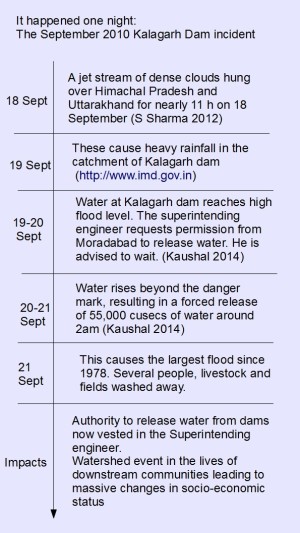 Those farmers lucky enough to own land have gone in for growing sugarcane, withstands most flooding. It too can be flattened by the sand brought in during ’emergency’ releases. Om Prakash told me that such a release this  year took away both his fields in Parmawala, and also his 20-year old son. Three days after Raksha Bandhan, the young man had gone to the fields to strip the cane leaves  for fodder. There was a sudden release of water, and the young man was never seen again. A sign posted on the barrage relieves the dam authorities of any culpability in such incidents.

Where do our Technocrats stand on this issue? At a recent meeting in Kanpur, several authorities including Dr. Tare, IIT consortium and Mr. Singh, retired official of UP irrigation expressed their opinion it is the people that need to adapt to the situation. Progress is needed, they said.

Dubious progress in the canal command area, sure devastation along the river. Progress.