It is officially the monsoon season but there are no dark clouds to be seen on the horizon as yet in majority parts of the country. This year, like some previous drought years, the monsoon has disappointed and the rice crop is in jeopardy. The fields are almost dry and the provision for enough water for irrigation seems to be the only hope the farmers have. Over the past Century, water use around the world has been increasing at a rate more than twice that of population growth1. With the changing climatic conditions, water from rainfall is becoming more unreliable. It is in such a situation that the agricultural sector will have to feed more people and have very little water to spare1 as there is also pressure from increasing water demand from other sectors. In order to then get more crop with less water, our techniques of rice production must be modified. It is in this context that one can look at the System of Rice Intensification (SRI), which, experts argue and studies demonstrate, can be used to preserve this indispensable resource. Studies show that SRI uses upto 52.4% less water per ha of rice farm1.

It has been estimated that irrigated rice uses 34-43% of the world’s total irrigation water.1 Almost all the rice crop grown in India is sustained through irrigation. About 1900-5000 litres of water is used to produce 1 kg of rice2. Thus the water use is immense in rice production. SRI then, is an agro-ecological method[1] for increasing the productivity of rice by changing the way that the plants, soil and water are managed. It is a technique developed in collaboration with the farmers in Madagascar in the 1980s. The purpose of SRI was to enable farmers with limited resources to increase their production and income without relying on external sources7. Most importantly, this practice can be adjusted to suit local climatic and soil conditions. This is because it is based on adjustments in the environment and not a change in the physiological aspect of the seed that is planted. The biggest advantage of SRI is the fact that it uses less seed and less water to give an increased yield as compared to conventionally transplanted (CT) rice. SRI does not require continuous flooding of fields like conventional rice, but requires water only when the crop needs it, i.e., when the field is relatively dry and ready for the next irrigation. Though by its name, SRI only stands for rice cultivation, it is also seen to be used in other crops. 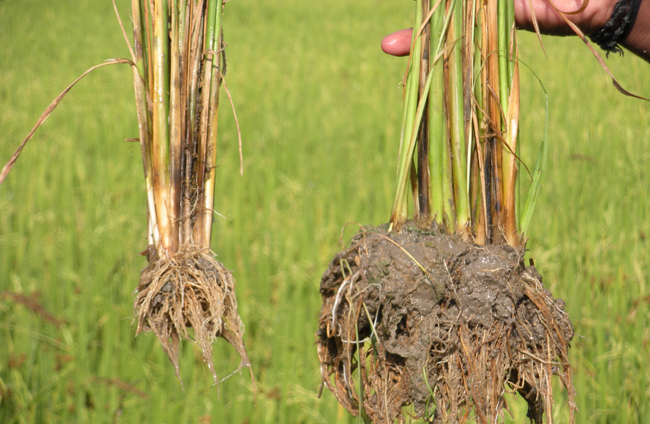 A number of countries have been practising the SRI technique. In India, this has started becoming popular with farmers. Farmers in states such as Tamil Nadu, Andhra Pradesh, Odisha, Bihar, Tripura have been practising SRI and gaining good results from it for many years now. According to a report in The Hindu, the area under SRI management in Tamil Nadu has now reached about half of the State’s rice area8. It says that in Tripura, almost 3,50,000 farmers are practising SRI in about 1,00,000 hectares, almost half of the State’s rice area8. A recent report on Odisha by the Cornell University in their SRI-Rice Global News Update states that among the families studied by them who actively practise SRI, there was a saving of 19% in the cost of production as the grain yield was higher even though the cost of cultivation was 3.2% higher. The farmers had a positive perception about SRI because it was economically better for them6.

Various other studies have been conducted to measure the amount of water saved in the use of SRI in different countries. The results have been positive almost everywhere. Jagannath, Pullabhotla and Uphoff1 in their Meta study comparing SRI and non-SRI method for irrigated rice production using data from 251 trials published in various studies, out of which 139 were from India, observe that there is almost 22% reduction in water use if one uses the SRI technique as compared to the traditional ways of cultivating rice. As compared to the mean Total Water Use (TWU) being about 15.3 million litres per hectare for conventional methods, SRI only demanded 12 million litres per hectare. The saving is even higher for the mean Irrigation Water Use, where non-SRl methods used about 11.1 million litres per hectare; SRI used about 7.2 million litres per hectare1. The study demonstrates that on an average, there is a “37.6% increase in water use efficiency (irrigation + other) with SRI methods compared to non-SRI methods”1. A study by Adusumilli and Bhagya Laxmi in Andhra Pradesh, India, in 2011 shows that there was upto 52.4% total water savings in SRI per ha basis and the SRI crop produced 18.5% higher rice, so water productivity of every kg of SRI rice was over 70% higher than that of non-SRI rice.

Y. V. Singh in his field experiment earlier in 2010-11, observed that less quality of water was utilized in SRI for the production of each unit of grain. Water saving of 34.5-36 % was recorded in SRI as compared to CT rice3. In SRI, cycles of repeated wetting and drying have been found beneficial to rice plant growth as it leads to increased nutrient availability leading ultimately to higher grain yield. There are visible gains in terms of yield upturn and water saving with non-flooding conditions7.

Singh, in his report, also recorded that there was a saving of 7-9 irrigations in SRI rice over CT rice. Besides savings in number of irrigations, there was saving in water in each irrigation since only 3cm water depth was filled in SRI whereas in CT used 5cm of water depth3.

The above statistics show that SRI has definitely been more efficient as a growing technique in conserving the water that is used for irrigation of the fields. It has also been observed that this is true for varying soil textures, differences in seasons, soil pH and also the duration of the variety of rice. Therefore, it is adaptable across diverse agro-ecologies.

An Indian woman shows the difference in the SRI (left) and the non-SRI (right) crop.

SRI is even more relevant in times of water scarcity:

So if we look at the question of water today, it becomes extremely important to then look at the benefits that SRI gives us. This year’s troubled monsoon (while the rainfall deficit at national level is 35% as on July 17, 2014, there are regions where the the rainfall deficit is as high as 64% in Punjab-Haryana, 71% in Western Uttar Pradesh & 82% in Gujarat, in fact these deficits were even higher on July 15, 2014) has been a cause for concern for farmers all over India. It is also the season for the rice crop. Areas of Central India and North-Western India have been receiving very less rainfall leading to reduced water availability. It has been getting more and more difficult for the farmers to maintain their crop and hope for the yield to be good. Since most of the rice crop is grown through irrigation, it then becomes important to maintain the sources of irrigation, mainly groundwater, since most dams do not have water at this stage.

In the Ganga Basin, one of the main kharif (monsoon season) crop is paddy or rice, significant part irrigated with water from the river and groundwater. The Ganga river is in crisis today not only because of pollution, but also because the river has very little freshwater most of the times and most of the places. In such conditions, if river is to have more freshwater all round the year, cutting down on water use for agriculture through SRI like technique for all crops can be hugely useful. SRI thus provides a less water consuming alternative to the people. Despite this potential, the government is not making any efforts to provide policy and economic incentives for farmers to take up SRI. It’s tried and tested benefits are being overlooked. SRI thus can also help the cause of the rivers in the Ganga basin[2].

Though all these studies have demonstrated that there is definite reduction in water use under SRI as compared to conventional methods, Adusumalli and Sen have also observed that even though this decrease is there, there are chances that the potential of water saving may be only marginally utilized4. This large potential in water saving can be realized through various measures like the better control and management of timeliness of water availability. But implementation of such types of irrigation is often difficult by farmers mainly due to lack of reliable water source & little water control7.

Application of such water saving technique to rice cultivation has the potential to reduce irrigation water requirements by upto 50% with yield advantage of upto 25%. This system requires low investment and is easy to operate. Proper water management is in fact key to higher yields and net income in SRI as this important input influences the effects of other inputs also.7

It is the Union Agriculture ministry, the state governments, agriculture universities and extension system which needs to wake up to this huge water saving potential of SRI, in addition to so many other advantages of SRI, including, most importantly, increasing the incomes of the farmers. This is particularly relevant in North West, West and Peninsular India. Even in climate change context, the SRI plants have shown greater adaptability to both droughts and floods. So why is it that this potential is not being harnessed? Why is it that on the one hand the government is making big budget plans for the apparent rejuvenation of rivers and on the other hand doing nothing about preserving their water? Why is it not pushing SRI in this drought year, particularly the western and North West India where there is maximum monsoon deficit?

To illustrate the neglect of SRI by government, see the PIB Press Release dated July 18, 2014 from Union Ministry of Agriculture with the title: “Measures to Address any Situation Arising due to Deficient Rainfall”. One would have expected that this would at least mention SRI, but there is no mention of SRI there!

[1]For some basic information on SRI, see https://sandrp.in/sri/