Yamuna Basin:  River Yamuna[1] accounts for 7.10 % of the total geographical area of the country. The Haryana state forms 6.5%[2] of the river basin. It drains an area of 366,223 square km in the Gangetic plain and constitutes 40.2% of Ganga Basin. The river annually carries 10,000 cubic billon meters (CBM) of water of with 4400 cbm is used for irrigation.  Yamuna river basin forms the upper sub-basin of Ganga river[3] the total area of which is 35798.19 square km comprising of 47 water sheds.

Yamuna river originates from Bandar Punch glacier in Uttarkashi district of Uttarakand. The river flows through about 200 kilometers before reaching Haryana State at Shivalik Hills in Yamuna Nagar district. In the same district the river is trapped in Hathini Kund Barrage located in Kalesar National Park.

Out of its 1376 km length 300 km falls in six districts in Haryana which are as Yamuna Nagar, Karnal, Panipat, Sonipat forming about 200 km river length upstream Delhi and Faridabad, Palval districts constituting remaining about 100 km.

Religious Significance:- Religiously Yamuna river is believed to be daughter of Sun God and sister of Yama the God of death. The Yamuna river finds its mentions in several holy books including the Rig Veda. Scriptures while held the Ganges an epitome of asceticism and higher knowledge, they define as holder of infinite love and compassion. Every year on the sixth day of summer Navratra, the birthday of Yamuna is celebrated as Yamuna Jayanti[4]. The festival of Bhaiya Dooj is also devoted to the love of Yamraj and Yamuna River. 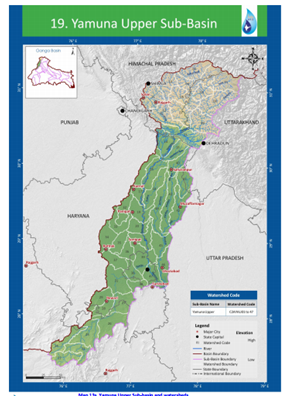 There are several sites of great religious and spiritual significance along river Yamuna in Haryana. Most of them are linked to Saraswati river and Mahabharata era like Adi Badri, Kuruskhetra. However Panipat, Sonipat, Tilpat are believed to three villages out of five demanded by Pandavs and all these are located on the western bank of River Yamuna including the Indrapratha a new city formed by Pandavs in Delhi.

There are also several ghats located along Yamuna river in Haryana where people from faraway places pay a visit during religious occasion to have a holy dip. Mass bathing events on occasion of Makar Shankranti, Somvati Amavasya, Ganga Dashara are held in Yamuna particularly at Panipat & Sonipat. Besides this hundreds of devotees on monthly basis visit these ghats to take dip in Yamuna River on occasion of full moon (Purnima), no-moon (Amavasya)  and during Sunday and Saturday to get rid of sins and worldly woes. But often they find either no water or polluted water in the river.

: The Buria[5] is an ancient town located close to River Yamuna in Yamuna Nagar district. It is closely associated with Mughal rulers. A chief courtier of Emperor Shah Jahan built a pleasure house at Buria, popularly known as Rang Mahal. Birbal, one of the close aides of Emperor Akbar was supposedly born at Buria. The presence of Birbal Dwar  (Birbal Gate[6]) in the town also indicates that the town was once governed by Birbal.

Environmental Flow: Much of water of the river is diverted into Western Yamuna Canal and Eastern Yamuna Canal from the barrage. As a result the river has become seasonal downstream the barrage and remains dry for most part of year. The chart below shows how over the last few decades extraction of Yamuna water has increased and simultaneously flow in the main river has gone down[7]. Downstream Okhala barrage at Delhi Haryana border, the river flows in highly polluted state all through Faridabad district.

Between Hathini Kund Barrage and Wazirabad Barrage Delhi, River Yamuna has turned seasonal flowing for few months in a year. Lack of flow in river has severely impacted the river, including the variety of aquatic life. However few fishermen obtain fishing permit from Haryana Fisheries Board and report recurring annual losses due to non availability of waters in the river. The water intensive and chemical farming in the catchment area is also negatively impacting the river. 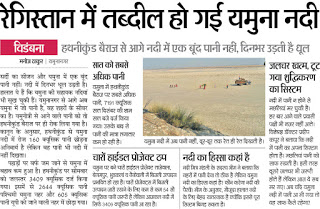 In addition to meet increased industrial and irrigational water need, it is also learnt that water is augmented in from Hathini Kund Barrage to run about half a dozen hydro power projects built on Western Yamuna Canal and Augmentation canal. It is also worth to mention that hydro power potential in Haryana is low and projects on age old irrigational canal has been ineffective in producing proposed amount of power. Apart from this, using irrigational canal for generation of hydro electricity is further stressing the already weakened canals which as a result there is increase in canal breach events which has been causing damages[8] to local villagers by flooding cropland during avoidable breaches.

The industrial effluents have endangered[10] the lives of thousands of villagers located along Dhanaura escape in Karnal and Yamuna Nagar. The chemical content in the water has also affected the quality of groundwater which in turn has been reportedly damaging the soil fertility thus the crop production.  Villagers feel that its industries which is making profit at the cost of their health. Many people in these villages were suffering from skin problems due to ground water contamination. Villagers have taken up the issue before district administration many a times but it has of no use.

Similarly the unchecked pollution from Drain Number 2 in Panipat has also played havoc with the everyday lives of hundreds of villagers settled along the drain. The roundwater along the drains has been contaminated. Farmers report frequently of crops damage. Villagers suffer[11] of numbers of diseases due ground water contamination. Downstream Delhi, the pollution situation becomes worse as the river continues to receive loads of pollution from National Capital Regions including the Capital. The pollution has been severely affecting livelihood of villagers. The social life and physical health of villagers has also been affected in multiple ways. In fact villagers have feeling that it’s a curse to live by polluted Yamuna.

Sand Mining: Illegal and unscientific sand mining is happing in all districts of Haryana along River Yamuna. Supreme Court and National Green Tribunal taking objection[12] to unregulated mining have imposed a ban[13] on it but to no avail.   In 2010 unsustainable sand mining led to damage of famous Tajewala Barrage. It has also caused fall in ground water table apart from hampering of recharge of shallow aquifers which feed the river during lean season. Continued sand mining has also posed threats to new Hathini Kund Barrage[14]. 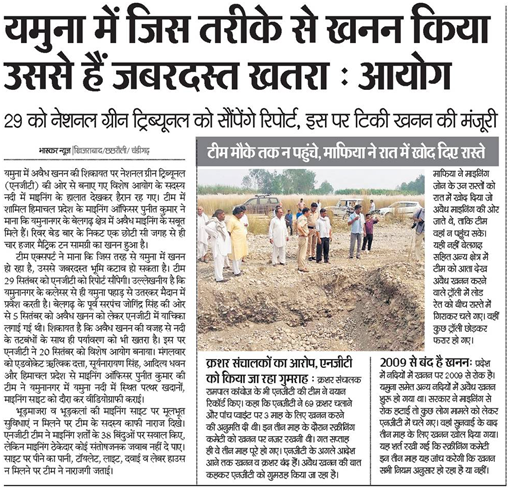 The Uttar Pradesh State Pollution Control Board (UPSPCB) further told the green panel that floodplains have been encroached upon in Delhi, Noida and Greater Noida to build apartments and housing societies.  The UPPCB alleged that these buildings released tonnes of solid waste and untreated water, which went directly into the rivers causing pollution, and said those living in them should be directed to have their own sewage treatment plants (STPs).

Sahibi River: The Sahibi[18] a rain-fed river originates from Aravalli Range in Sikar district of Rajasthan state. After covering about 157 km distance in the Rajasthan.  It leaves Rajasthan state beyond Kotkasim in Alwar district near village Ujauli and covers a total distance of about 222 km up to Dhasa Bund. The main tributaries of Sabi are Sota river, Kotkasim drain and Indori river (Indori Nallah).

It enters Haryana state at Jhabua, near the city of Rewari in Rewari district, after which it re-enters first Rajasthan state near Kotkasim, and then Haryana again near the village of Jarthal. The dry riverbed near Jarthal is 2 kilometres wide. During light monsoon rainfall, the river’s flat and sandy bottom absorbs all rainwater. During heavy rains, the river has defined course up to Pataudi railway station and branches off into two smaller streams to Jhajjar, finally reaching the outskirts of Delhi through Najafgarh drain and ending at the Yamuna River.

Historical Significance: Harrapan period earthenware (Pottery) has been found on the Sahibi riverbed by INTACH-Rewari, at Hansaka village, Rewari District in 2012.  A red stone statute of Vamana Dev, now displayed at the Shri Krishna Museum, Kurukshetra was unearthed in 2002 on the Sahibi riverbed near Bawal. In various other places on Sahibi riverbed, many artifacts have been found, including arrowheads, fishhooks, spearheads, awls, and chisels.  The Najafgarh Drain gets its name from the once famous and huge Najafgarh Lake near the town of Najafgarh in southwest Delhi.

The Sahibi River flooded severely in 1977. In response, the Masani barrage dam was constructed. Several smaller dams have also been constructed in its basin throughout the hills of Rajasthan to store rainwater. The construction of dams has restricted the flow of water on the Sahibi River as a result the river hardly flows even with run off during monsoon. Most of the course of Sahibi river has been channelised for flood control purposes in Delhi and Haryana.

Few individuals and groups in Yamuna Nagar and Panipat are raising the issue of Yamuna pollution for past many years. Aditya Jain a retired Coal India official has been working as vigilant against dumping of waste in water streams particularly Western Yamuna Canal in Yamuna Nagar.  One more press reporter Manoj Thakur in Yamuna Nagar officially and personally involved in several issues causing damage to Yamuna Rive. Janak Rawal at Panipat with his groups often organizes awareness campaigns against dry and polluted Yamuna. Gandhi Ashram, Patti Kalyana, Smallkha at Panipat few years back initiated a public movement against rampant sand mining in Panipat and Sonipat region.

In present scenario, when the prime stakeholder Haryana Government like other States is primarily bothered about meeting its ever increasing water demands through already stressed aquifers and wrenched out rivers.  Once water is diverted for irrigations, rivers are left at the mercy of sand miners. Final nail in the coffin is put by discharge of voluminous industrial and domestic waste water dumped in the river via Dhanaura Escape Karnal, Drain Number 2 Panipat and Drain Number 6 Sonipat.  As a result irreversible damage is being done on physical and biological properties of the river resulting in an ecologically dead Yamuna in Haryana.

Haryana Rivers Health Assessment: After examining various aspects of all the rivers  flowing in and through Haryana State, their health can be assessed using a colour chart against key parameters.

Based on this exercise, Thapana, a small (15 km) tributary of river Yamuna in Yamunanagar district is perhaps the only BLUE river in the state since it has no anicuts or barrage on it or any major source of pollution. The only threat is non point agricultural runoff. Local people have taken upon themselves to protect it. All the rest rivers in the state fall under the RED category on account of high diversion, almost complete non monsoon dessication and high to very high levels of industrial pollution.