In a remarkable decision, the Forest Advisory Committee (FAC) of MoEF has rejected the forest clearance to 3000 MW Dibang multipurpose project for the second time in its meeting held on 29 -30 April 2014. In that meeting FAC considered the Dibang multipurpose project for diversion of massive 4577.84 ha of biodiversity rich forest land which would lead to cutting down of huge 3.24 lac trees.

The project was previously considered in the FAC meeting of 11-12 July, 2013 for diversion for 5056 ha of forest land which would have led to cutting down of 3.55 lac trees. In that meeting too, FAC had rejected forest clearance to the project. It is important to note that the foundation stone of this project was laid way back on 31st January 2008 by the Prime Minister of India (to know more on this, read our earlier blog on Dibang[1]). At that time the project had neither the environment clearance nor the forest clearance even though these two are most essential for a project to legally have foundation stone.

Over six years later, continuous rejection of forest clearance to this project reflects how government gives little importance to environment while planning for mega development projects such as Dibang. This kind of callous environmental governance, disregarding environmental concerns of large number of people was one of the major reasons for decimation of the UPA government, provided NDA government wants to learn anything from it.

Rejecting the forest clearance to this project, the latest FAC meeting proceedings stated, “In view of the above the committee has recommended for rejection of the proposal and felt that the proposed area is very rich in Bio-diversity aqua sensitive ecosystem being at the edge of hills and flood plains and having large number of endemic and endangered flora and fauna. Moreover, such project is most likely to have considerable downstream impact on the Dibru-Saikhowa NP in Assam which is not yet studied.”

SANDRP has been making submissions to the FAC & other authorities on this project at various points of time. Brief timeline regarding Dibang HEP is given in Annexure 1. Excerpts of our last submission dated 28th April 2014 are given in Annexure 2. The project also does not have environment clearance.

FAC Rejected CCI Recommendation to Give Clearance to Dibang Project While considering the forest clearance to Dibang project, the statutory body FAC was under pressure from the Cabinet Committee on Investment (CCI) headed by the Prime Minister of India. In its recommendation to FAC the CCI had stated – “The Committee considered the note dated 25.10.2013 from the Ministry of Power (Vidyut Mantralaya) and in the light of all relevant facts, decided that Ministry of Environment and Forests may grant the requisite clearance for diversion of forest land expeditiously. The Committee further directed that appropriate measures for increasing the environment flow in the 1.2 Km along stretch between the dam and Tail Water Level (TWL) of the dam to Power House be taken and if required, adjustments in the project parameter be made at a later stage keeping in view the report of Water and Power Consultancy Services (India) Ltd.”

The project proponent NHPC Ltd had approached CCI after FAC meeting of 11-12 July, 2013 where the forest clearance to the project was rejected for the first time.[2] It is important to remember here that while rejecting the forest clearance to Dibang the FAC had clearly stated that “ecological, environmental and social costs of diversion of such a vast track of forest land, which is a major source of livelihood of the tribal population of the State, will far outweigh the benefits likely to accrue from the project.” CCI’s intervention in this matter, to push for the forest clearance for the project, was not at all based on merits of the issue. This also reflected a total disregard for the FAC clearance process. The FAC has taken a positive step towards conservation of the rich biodiversity of the Dibang valley, disregarding the CCI suggestion.

Welcome decision It is indeed amazing that over six years after the Prime Minister laid foundation stone, the project is unable to submit a satisfactory proposal complete in basic details. How can the cabinet ask that such a proposal be cleared?  This is also a fitting answer to all those who have been blaming MoEF for not clearing projects. How can projects be cleared if the project authorities are not able to provide even basic details as required under the law?

This categorical rejection of the Dibang HEP by FAC on merits is indeed a remarkable decision of the FAC and we hope the new government at the centre with strengthen this decision and learn lessons for the hydropower projects in North East India.

Brief Timeline of the Dibang Project

Submission made by SANDRP to the FAC on Dibang Project

SANDRP’s submission of 28th April 2014 which was also endorsed by Keshav Krishna Chatradhara of Peoples’ Movement for Subansiri and Brahmaputra Valley (PMSBV), had mentioned several pressing concerns regarding Dibang project. Some of these mentioned below:

1. Revised Proposal for Dibang HEP is incomplete, FAC cannot Consider on the basis of incomplete proposal – In our submission we had clearly mentioned that the revised proposal which is submitted by Government of Arunachal Pradesh on 13.02.2014 was incomplete which was very clear from the factsheet that was made available on the forest clearance website dated 21st April 2014.

o The revised proposal does not provide the details regarding Compensatory Afforestation (CA). Details such as the non-forest area/degraded forest area identified for CA, its distance from adjoining forest, maps showing the area identified for CA and adjoining forest boundaries, details of CA scheme, total financial outlay for CA have not been provided along with the revised proposal.

o The recommendations from DFO, CCF, Nodal Officer and SG were not available.

o The revised proposal submitted by government of Arunachal Pradesh on 13.02.2014 was clearly incomplete since in the Form A submitted by the state government, the Part-II of the form was not been enclosed.

2. No Details about the Reduction in Land required for the project The proposal stated that the land requirement has been reduced to 4577.84 ha from the 5056.5 ha which implies that 478.56 ha of land has been reduced. But the factsheet mentioned about the reduction of 33.658 ha of area falling under the 10 km radius of Mehao Wildlife Sanctuary. But it has no information about the rest 445 ha of land. The revised proposal should provide detailed breakup of forestland, river bed and non-forest land coming under the revised submergence.

3. FAC concerns remain unresolved While rejecting the forest clearance to Dibang the FAC had clearly stated that “ecological, environmental and social costs of diversion of such a vast track of forest land, which is a major source of livelihood of the tribal population of the State, will far outweigh the benefits likely to accrue from the project.” There is nothing in the fresh proposal to resolve these issues.

4. Huge opposition to the project in Arunachal Pradesh and from downstream Assam: The project faces stiff opposition from Arunachal Pradesh and even more so in downstream Assam and any effort at pushing the project is likely to spark conflicts in this conflict prone region, like we are witnessing in Lower Subansiri HEP. FAC should not go ahead with the project without assessments, studies and participation to save future complications and wastage of resources. A video titled “Dibang Resistance (Arunachal Pradesh)” depicts the protest and blockade by local people against the Dibang dam. The video can be viewed here – https://www.youtube.com/watch?v=m8TCUKh2hQY 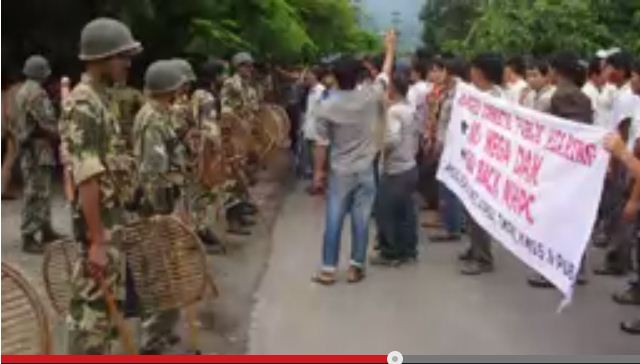 5. Impacts of Climate Change: North East is one of the 4 most vulnerable regions to Climate Change Impacts as identified by the Climate Change and India 4X4 Assessment Report of the MoEF. Detailed studies about the impact of the loss of 4577.84 hectares of forests needs to be conducted on various aspects, including adaptive capacity of the people, biodiversity and so on. Ironically, the Site Inspection Report only mentions that to decrease Green House Gas Emissions, trees surrounding the reservoir should be cut, which highlights the unscientific, misleading and myopic perspective on climate change and its impacts. There should also be assessment of impact of the loss of carbon sink, green house gas emission from the reservoir and local climate impacts. We are already experiencing the effects and impacts of climate change. It should now be obligatory for the FAC to consider climate change in its functioning.

7. No Public Hearing Held in Assam Even though the Dibang multipurpose will have severe impacts in downstream Assam, there was no public hearing held for the project in Assam. This is a clear violation of norms and this should be taken seriously by the FAC.

Similar concerns were resonated in the submission made by Shri Chow Rajib Gogoi, Secretary, All Tai Ahom Student Union, Jorhat on this project to the 68th meeting of Expert Appraisal Committee held on September 23rd-24th, 2013. In that submission it was said “The Dibang project will cause regular havoc in the downstream Assam, not just in terms of forest but also agriculture and livelihood. The EAC / MoEF is also aware of the widespread concerns in Assam about the downstream impact of dams and has respectfully repeatedly received petition on the same. We are disturbed that concerns still remain unaddressed.” But the reply to this by the project proponent reflects lack of seriousness on the part of the proponent. The project proponent stated, “The memorandum has not given the detail as to how Dibang project would cause havoc in the downstream in terms of forest, agriculture and livelihood.” It is surprising to read such a reply since it is the responsibility of the project proponent to get these studies done. But in stead, to cover up, it is asking a local student group to give all these details!

8. Severe Impacts of Migration of Outsider on Local Tribal Community and Fear of Demographic Imbalance Influx of migrant worker for construction of Dibang multipurpose will have severe impacts on the communities living there. The primary inhabitants of Dibang valley are Mishmi (Idu) which is a very small community with a population of 11,023 according to 2001 census. Due to this, they fear that influx of outsiders for dam building will lead to a demographic imbalance in the Dibang valley. According to NHPC estimates a workforce of 5800 people (labour and technical staff) would be needed for the Dibang multipurpose project. But All Idu Mishmi Students Union (AIMSU) has contested this figure and opined that a single project would bring about 15,000 people into the region. It is also reported that NHPC claim that the project will cause ‘negligible human displacement’ grossly undermines its harmful impacts on smaller ethnic community such as Idu Mishmis[3]. This is a serious concern regarding Dibang multipurpose project and severe demographic impacts which can be deduced from the figures above cannot be undermined.

Influx of labour at such a massive scale will increase the conflict potential of the region. As it is, the region is scarred with many conflicts and unrest surrounding water. MoEF needs to be sensitive about growing discontent and increasing conflicts in this region.

9. No Cumulative Impacts Assessment study undertaken: 3000 MW Dibang HEP is one of the 17 cascade of hydel projects coming up in the Dibang valley. When this is known, the FAC cannot consider Forest Clearance to 3000 MW Dibang Project in isolation. The FAC should first ask for a cumulative impact assessment study and Basin Study of the Dibang River, to be done by an independent consortium of experts (not agencies with conflict of interest and poor track record like WAPCOS), the study should include carrying capacity assessment and only based on such a study consider individual projects in this region.

[3] Mimi, R., “The Dibang Multipurpose Project, Resistance of the Idu Mishmi” published in “Water Conflicts in Northeast India – A Compendium of Case Studies” edited by Das, Partha J. et. all, 2013