While Bihar is again facing one of the worse floods this monsoon, one basin in Bihar that has possibly faced the maximum floods is Gandak, as a number of reports[i] have described. The floods in Gandak basin were pretty serious, as embankments along Gandak breached at multiple locations, first on western side (Gopalganj district) starting on July 23-24 night and then on Eastern side (Purbi Champaran district).  The flood lead to breaking of three year old HFL (Highest Flood Level) record at Dumariaghat, 19 year old HFL record at Lalganj and most shockingly, 34 year old HFL record at Rewaghat.

But there are some serious anomalies here when we see that at upstream Chatia, where the current HFL was reached in 2002, the water level did not even cross the warning line, leave aside going anywhere near HFL. At downstream Hajipur, the situation was similar. Here, the HFL since 1948 is holding, and almost 10 km wide river stretch, “seems like a sea” as Prof Rajiv Sinha of Indian Institute of Kanpur told SANDRP, again the peak water level this year so far is even farther than the warning level.

Gandak River Gandak is a fascinating river. As Parineeta Dandekar told me, the name means “a sacred knotted thread”, quite appropriate if we were to consider the complex flow pattern of the river, older than Himalayas themselves! Some basic information of the Gandak (also called Naryani, Sadanira in Nepal) basin is provided in Annexure 1. The river source is at the border with Tibet at an elevation of 6,268 m at the Nhubine Himal Glacier in the Mustang region of Nepal. The basin also contains three of the world’s 14 mountains over 8,000 m, namely Dhaulagiri, Manaslu and Annapurna I[ii]. If one measures the depth of a canyon by the difference between the river height and the heights of the highest peaks on either side, the gorge with Dhaulagiri (8167 m high) on the west and Annapura I (8091 m) on the east is the world’s deepest. Out of total catchment area of 46300 sq km, the area in India is 7620 sq km, which is around 16.5%. This suggests that for flood forecasting in this river, we need to watch the Nepal catchment closely.

The Flood Gaon Connection wrote about the Gandak floods[iii]: Around 2 am on July 24, Saran embankment on western side of the river, had breached at two places (near Devapur and Puraina villages) leading to large volumes of water gushing into the villages of Gopalganj district. Soon the news of another breach, this time in the eastern embankment of Gandak, downstream of Saran embankment was reported near Bhawanipur village leading to massive floods in East Champaran district. s per the state water resources department, at least 1,700 hectares (ha) area in Gopalganj and 3,550 ha in East Champaran is expected to be inundated.

Earlier on July 15, 2020, approach road to the newly constructed Sattarghat bridge on Gandak collapsed that possibly made bigger flash that the Gandak floods[iv]. That site is about 11.5 km downstream of Dumariaghat, Eklavya Prasad of Megh Pyne Abhiyaan told SANDRP, as he helped get a lot of local feedback in understanding these floods. From all available indications, it seems like it has possibly created a new bottleneck and could also be a source of severity of flood at Dumariaght. As can be seen from screenshot of CWC report of July 15, Gandak water level at Dumariaghat at the time that collapse was already 63.64 m, just 46 cm below HFL.

Peak flow in Gandak As per Bihar WRD, peak flow so far this season in Gandak at downstream of Valmiknagar barrage was 436500 cusecs on July 21, 2020. That peak, as it travelled downstream, lead to HFL crossing at Dumariaghat on July 23 and Rewaghat on July 24. The discharge capacity of Valmikinagar barrage is 8.5 lakh cusecs. The peak flow at the barrage during entire 2019 monsoon was just 2.151 lakh cusecs (on Sept 18, 2019). The highest ever recorded flow has been 6.3975 lakh cusecs, recorded on July 31, 2003. The flow was in excess of 2.3 lakh cusecs throughout on July 24, 2020. 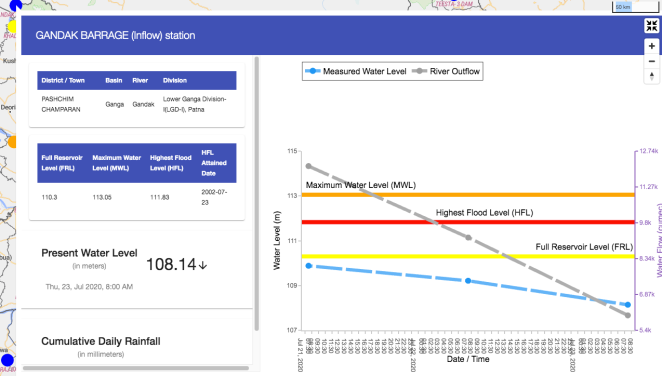 Pros Rajiv Sinha expressed skepticism about these flow figures, since, he said use of both the velocity measuring device and method and the outdated river cross sections for Gauge discharge curve were questionable. He said he was part of a committee that reviewed CWC’s flow measuring sites 3-4 years back and gave D grade to most sites. While what he says is true, we are using these figures since these are the only ones available to make a sense of the Gandak floods.

CWC hydrographs Let us try and understand the Gandak flood using the information and hydrographs from CWC flood forecasting site, along with other information from Bihar’s FMIS (Flood Management Information System) and other available sources. Since Central Water Commission is Government of India’s premier water resources agency, and it is the only agency involved in flood forecasting, let us try and see what CWC-FF tells us about the Gandak flood.

The CWC-FF division gave first warning of this flood episode through this tweet on July 20, 2020, warning: “River Narayani (Nepal) / River Gandak in India flowing 1.47 m above Danger Level at Devghat in #Chitwan District of #Nepal. Likely to enter India through Gandak Barrage and thence through Kushinagar Dt of UP and Gopalganj Dt of Bihar. courtesy http://hydrology.gov.np”

This was reflected in the Gandak water level at Triveni site in Bihar’s Banka district crossed the Danger line at around 2.30 am on July 21, as per above tweet from CWC-FF.

This was then reflected in Khadda site in Khushinagar (UP) since Gandak forms border between Kushinagar (UP) and Paschim Champaran (Bihar) once it enters India. In the above CW hydrograph, we can see that the Gandak water level crossed Danger line here in the morning of July 21, and by noon next day, the water water level came belwo danger level, as the flood peak passed.

The next site is Chatia in Purba Chamaparan district, where as we can see from the CWC FF hydrograph, the Gandak water level reached a peak of 67.96 m, full 19 cm below even the warning level, leaving aside crossing danger level or going close to or over the HFL. This was pretty intriguing. When we asked CWC-FF over tweeter on July 24 how does one explain this, they replied: “As can be seen from the river basin map of Gandak, near Chatia there is lot of spread on the right bank side of the river but the station Chatia is on the left bank. So not much flow is coming near the left bank side. This is the reason behind the non-flooding at Chatia… However in some of the years Chatia also has crossed Warning and Danger Levels due to more flow on the left bank side.”

This part of CWC response raises the question if the CWC flood forecasting site is reflecting correct water levels. Has CWC put gauge measuring site where “not much water is coming” as CWC itself says? Why is the gauging site at such a location which would clearly not provide accurate and correct water levels? It may be added here that Chatia site’s current HFL of 70.04 m was recorded on July 26, 2002, when that water flow did not cross the HFL at Rewaghat, but this year the Rewaghat has crossed that HFL. Dr. Dinesh Kumar Mishra, arguably one of the most knowledgeable person on Bihar rivers, hinted at this when he told SANDRP, “This may be due to misinformation”. He also mentioned lack of sufficient manpower in Bihar Water Resources Department here due to suicide last year here of one of the employees and reported suspension of a number of officials.

CWC further responded: “It can be seen that on the right bank not big habitation is there while on the left bank there is Chatia town. Hence the Government of Bihar might have selected this location for Flood Forecasting. This is done in consultation with State Government.”

Next site along the flow of Gandak river is Dumariaghat, where the current HFL of 64.1 m (achieved on Aug 17, 2017) was crossed at 1600 hrs on July 23, 2020. The river water level reached a new high of 64.36 m, at 0600 hrs on July 24 and remained there for two hours. The water level down below the HFL of 64.1 m at 0600 hrs on July 25, thus water level remained above HFL for 38 hours and the new highest level is 26 cms above the old HFL. Both these parameters, the number of hours above HFL and the quantum increase in HFL are unusually high. This could be partly due to breach of embankments, partly possible impact of downstream bridge and narrow path at Dumariaghat, but it also signifies that there was significant flood, which could have been forecast at least since July 20, but CWC did not forecast the severity or longevity of it at any stage. 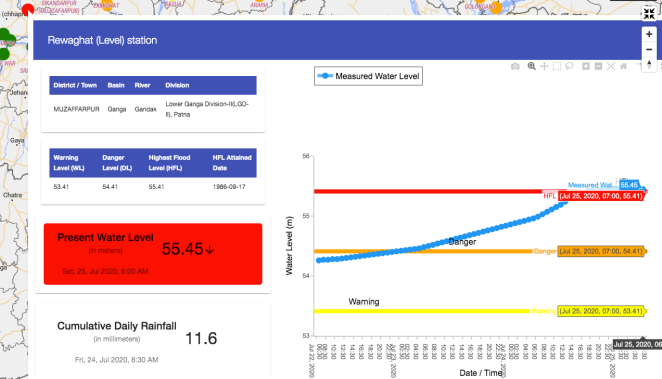 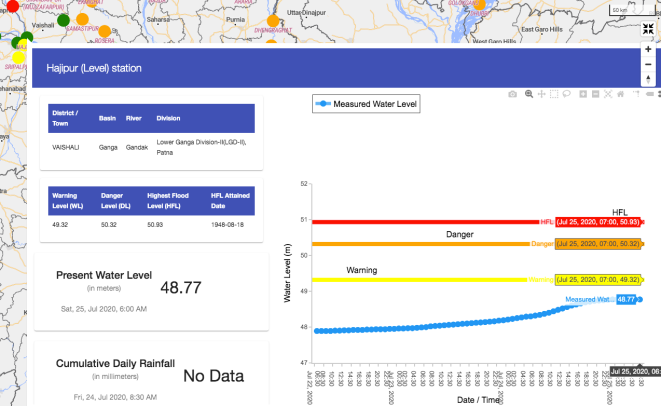 Further about 20 km downstream, just 6-7 km upstream of Gandak confluence with Ganga, is the Hajipur site of CWC FF. Here the HFL of 50.93 m recorded in 1948 still holds. The highest the Gandak water level achieved this year here was 48.77 m at 0000 hrs on July 25, and remained there for 17 hours before it started receding. This level was 55 cms below even the warning level here of 49.32 m. It may be noted here that Ganga at Gandhighat, the closest site to Gandak-Ganga confluence, was at that time flowing at 47.98 m, above the warning level here of 47.6 m!

Lessons To learn any lessons from this rather unprecedented Gandak floods (should it not be called unprecedented considering it broke a 34 year old flood record?) we need a more accurate account of what happened. This would only be possible if Bihar govt were to institute an independent probe into what happened, the probe should include the CWC’s flood forecasting performance and how it could be more accurate, more advanced and more reflective of ground situation. The need to take into account the situation in Nepal catchment is also important. The probe should also look at the embankment breaches, if it could have been prevented, if there is role of the new or old bridges and other obstructions. The probe should also look at the option of decommissioning of embankment where necessary. The response of Bihar disaster management department, WRD, FMIS, IMD and district administration should also be part of the probe. Lastly, the need to involve the local communities in the governance of the river, flood and related matters cannot be under estimated.

The river Gandhak originates in Tibet at an altitude of 7620 m above MSL in the north east of Dhaulagiri near Nepal border at Latitude 29018′ N and Longitude 83058’E, in the snowy peaks of the Himalayas. The river enters the Indian territory near Tribeni town in Nepal. There after the river flows in a southerly direction and forms boundary between Uttar Pradesh and Bihar. It flows through the west Champaran, East Champaran, Muzaffarpur, Gopalganj, Siwan, Saren and Vaishali districts of Bihar and Gorakhpur and Deoria district of Uttar Pradesh before joining Ganga at Hazipur.[v]

However, as per WRIS (Water Resources Information System, Govt of India) Ganga basin report (2014): “The Gandak river (Sadanira, Saligrami in Nepal, or Narayani in the plains), known as the Kali or Krishna Gandak in the upper reaches rises at the altitude of 7620 m in Tibet near Nepal border. After receiving number of tributaries, like the Mayangundi, the Bari and the Trisuli, the Gandak debouches into the plains of the Champaran district of Bihar at Tribeni. At this point two more tributaries namely the Panchnad and the Sonhad join the river.

The Gandak comprises two streams- the Kali Gandak rising close to Photu Pass near Muktinath and the Trisulganga originating north of Gosainthan (8013 m). It cuts through the Mahabharat Range and covering a distance of 425 km joins the Ganga near Patna. Its total catchment area is 48,500 Sq.km, of which 9,540 Sq.km lies in India. The total length of the river from its source to outfall into the Ganga is 630 km of which 255 km falls in India.”