Diverting sewage and desilting are cornerstones of all lake rejuvenation today. Some important questions loom large. Doesn’t this push the problem downstream to the next water body? The lake filled with sewage and other questionable effluents is a problem for residents around the lake. Quite understandable so: The Mosquitoes, the intolerable stench, garbage piling up along with the recklessly growing vegetation. So, sewage gets diverted and garbage get thrown in someone else’s backyard. This apparently, is called Nimbyism.

‘Nimby’ is a noun meaning “a person who objects to the siting of something perceived as unpleasant or hazardous in their own neighbourhood, especially while raising no such objections to similar developments elsewhere”. Those showing Nimby reaction are called Nimbys and their state of mind Nimbyism. There is an acronym as well “NIMBY” – Not In My Backyard.

The government along with the support of some citizen groups and NGO’s practice Nimby development. Nimby development is categorically applied to all lake rejuvenation projects. The latest victim of this is Byramangala Tank.

Built in 1942 as an irrigation tank, across the Vrishabhavathy valley, Byramangala tank lies 15 kms south of Bangalore. The white, snowy frothing waters, that flows down the check dam has earned the tank a nick name: Niagara Falls of Ramnagara. The Vrishabhavathy river flowing into the tank, also has a nick name: Kengeri Mori. For almost 50 years the tank has taken the brunt of industrialization and urbanization of Bengaluru. The abuse of this river and its tank is far greater than KC valley and Bellandur Tank.

Peenya Industrial Area (IA), Yeshwanthpura IA, Kumbalgodu IA are all upstream of the tank, while Bidadi IA is adjacent to the tank itself, while Harohalli IA is downstream of the tank.  The river drains 1/3 of Bengaluru carrying all it sewage and approximately 480 MLD of waste water flows into the tank every day.

On 3rd Aug 2019, Byrmanagala Tank was breached by Cauvery Neervari Nigama Ltd (CNNL) without fanfare. The shocked farmers gathered to see. Bangalore Environment Trust (BET) went to the site to investigate and understand the brewing crisis.

The tank water irrigates 5280 acres of land with a network of canals. This is the command area, where the farmers are legally entitled to receive waters for irrigation. Large acreage is irrigated by farmers who have illegally sunken pump-sets directly into the tank. Then there are farmers who have sunk pump-sets directly into the valley, which is again illegal. By some local farmer accounts and watermen accounts, approximately 10,000 acres are irrigated by Tank and Valley pump-sets. Minor irrigation, which is the custodian of the tank, has no official numbers on total land irrigated by pump-sets. To add to that, there are hundreds of landless farmers, who harvest fodder for cows, from the lake bed and the surrounding areas to make ends meet. There are no official numbers on them either.

As the days went by, the water level in the tank reduced and the first affected were the Tank pump-set farmers and the landless farmers. The submerged pump-sets were now exposed as shown in the video below.

With no water, their crops stand to wither. The Tank farmers understand the illegality of the pump-sets. But they question the inhuman apathetic attitude of the government officials. If the officials had just spread the word about the project, then they would not have spent all that money on cropping. Now the money is gone, the crops are gone and livelihood prospects look bleak. The video below captures the farmer’s plea.

Our survival at stake (Credits: BET)

BET made calls to Byrmangala Gram Panchayat (GP), Chowkahalli GP, Kolliganahalli GP, and Thuguni GP.  It was discovered that none had received any official communication about the project. They were as much in the dark. Calls to Karnataka State Pollution Control Board (KSPCB) Member Secretary and meeting with the Ramnagara Regional officer revealed the same. They didn’t know and were not informed. BET found no public notice at the site. There was no public hearing with the people whose livelihood this project was going to have a severe impact on.

What is the project all about?

Perusing the ill-written DPR procured by BET, it quickly became clear that the project was pushed as quickly without any due diligence and application of mind.  In a nutshell: “The project proposes to build a diversion channel (Length 6.8 km, width 4.25m) across Byramangala Tank, so as to divert polluted waters of Vrishabhavathy river,  downstream, bypassing the tank altogether. The project costing Rs 110 crores explicitly states that the tank water is unfit for irrigation due to industrial waste and that intensive farming should be reduced. It further states that heavy metals and other pollutants are found in the crops and in the milk produced. All of this is injurious to human health. To overcome this problem, the polluted water is diverted downstream. The tank will be emptied, desilted and is to be filled up during flood season when the pollution is diluted. Minor improvement to the tank like jungle clearance, contour bund and desilting is also proposed”.

That’s it. CNNL was blindly pursuing a Rs 110 crore NIMBY project, in an area where farmers want that water in their backyard. Except for the first few pages, DPR only consisted of technical details of constructing the diversion channel. Desilting was being done, just enough to build the contour bund. There was NO mention of the impact on farmers, on livelihoods, on agriculture, on pollution levels, on fishing communities. No assessment done of the loss of livelihoods. It was now clear why the public hearing was not conducted. Farmers would not have allowed it. CNNL was also contradicting the pollution control board reports that classified the water as fit for irrigation.

As BET shared the details of the project with the farmers, many concerns emerged.

Byramangala Tank is their livelihood water. They grow two to four crops a year.   They can do that, as they are not dependent on erratic rainfall but on the steady flow of waste water from Bengaluru. As the rainfall varies year on year, no one can guarantee, the quantum of water flowing into the tank. With the diversion, no one can guarantee that they will have water for the crops.  Even for a single crop in any given year.

We will not be able to farm (Credits: BET)

Floods is when a lot of solid waste gets dumped into the valley. Especially, small scale plastic industries in Nayandhahalli and Kumbalgodu industrial area. This is also the time, when the industries release their effluents as it is not detectable.  The claim, that pollution is diluted during flood season is questionable. What about all the solid waste esp plastic that gets collected behind the tank? Don’t they release chemicals as they break?

The industries upstream are polluting our livelihood water. Without taking action on them and stopping the pollution there, what will the diversion accomplish?

As the diverted poisonous water goes downstream, it is impounded at Harobele village in kanakapura taluk and is known as Arkavathy Reservoir Project or Harobele dam. This dam, built in 2004 for irrigation across Arkavathy river, receives the diverted Vrishabhavathy water. Arkavathy river has no flow of her own, until Vrishbhavathy joins near Kanakapura town. With the diversion project, Arkavathy Dam will be like Byramangala Tank in a few years.  Arkavathy dam irrigates 28,000 acres of farmland and has a thriving fishermen community. What is the fate of them?  Arkavathy joins Cauvery and this project will ultimately pollute Cauvery river, pushing the problem further downstream. Filling the tank with treated clean water makes sense, diverting polluted water is non-sense.

Lakhs of farmers will be affected by this project. The government officials have failed to exercise care that a reasonably prudent person would exercise in this circumstance. Government as a public trustee of the valley and the tank, has not taken adequate steps to prevent pollution of the valley and protect the livelihood water of the farmers. They have recklessly violated farmers “right to life”. For the illegal actions committed upstream by the industries in the valley, the farmers downstream are paying the price with their livelihood. Instead of reversing the environmental damage, the project pushes the problem downstream. This project will worsen the situation for the people and the environment. The 11o crores project’s only accomplishment will be displacement of farmers. 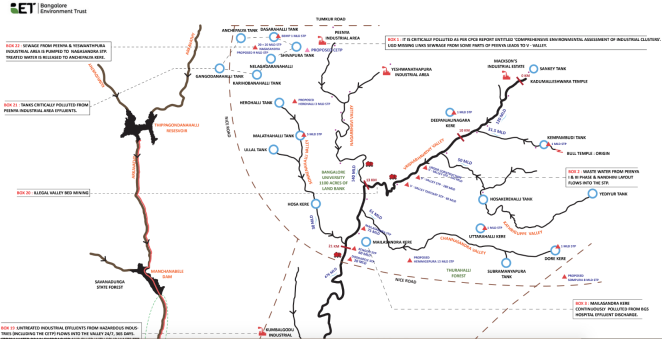 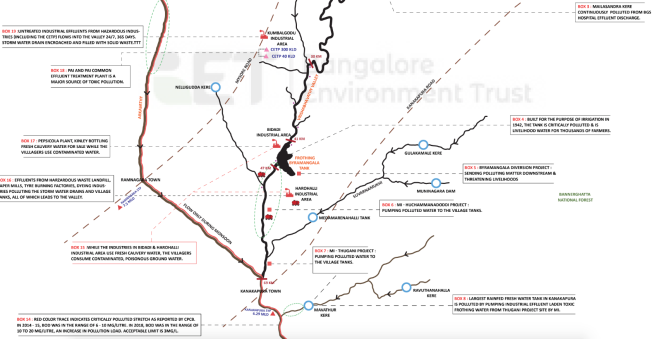 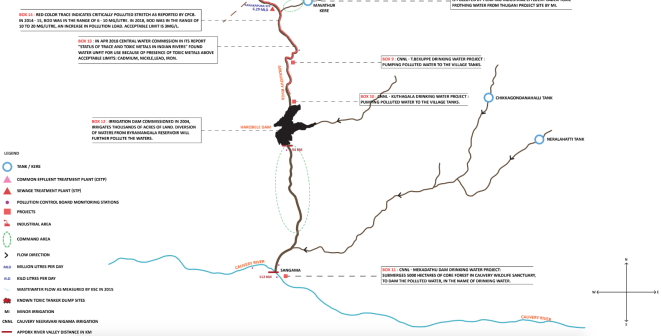 NOTE: Bangalore Environment Trust (BET) has been investigating pollution, livelihood and drinking water issues in the Vrishabhavathy and Arkavathy catchment for the last two years, to get an in-depth understanding of the complexities. With this understanding we empower the farmers to act.  Bangalore Environment Trust youtube channel can be found here.

Citizens can report pollution in the Vrishabhvathy valley:
1. Write to  BangaloreEnvTrust@gmail.com
2.  Whatsapp 8884666008