Why? Some of the major reasons for this declining proportion of hydropower generation are: diminishing generation of existing hydropower projects in India[ii] (see the graph above) and large hydropower projects becoming more and more unviable[iii]. As power minister of India stated in the Parliament recently[iv], at least 15 large hydro projects (NHPC chief says 40 HEPs need bailout package, see below) with capacity close to 6000 MW remains stranded in India.

In fact, diminishing hydro capacity is a global trend, as can be seen from the graph below (Source: http://www.transrivers.org/2019/2597/).

The Hydropower installed capacities in different regions of India is given in tables below[v]. 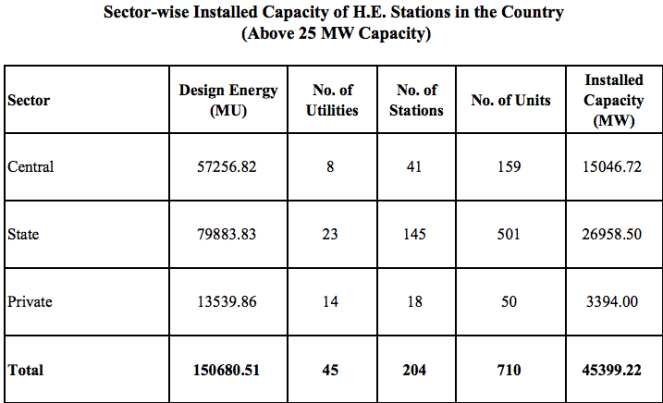 The status of under development schemes is given below[vi]. 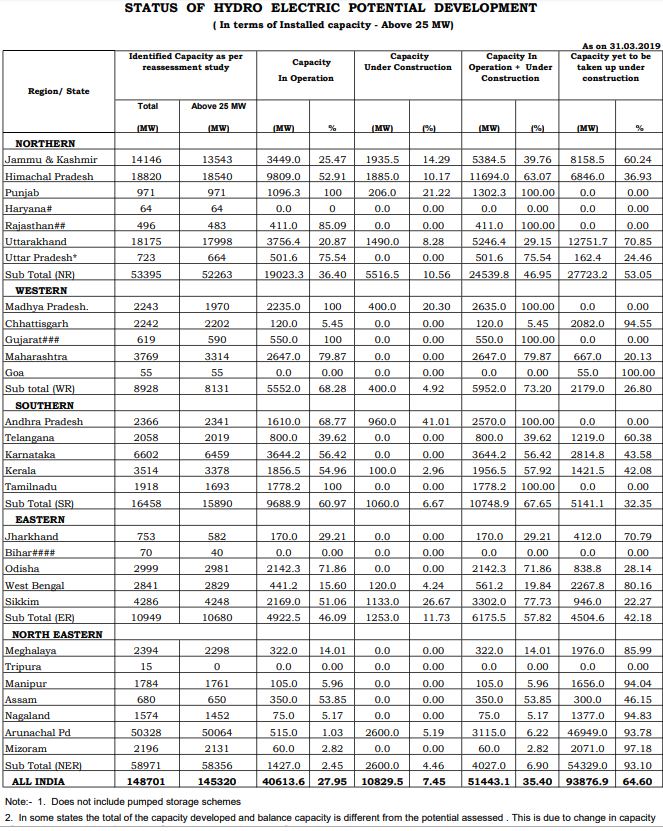 The Govt continues to push large hydro On March 8, 2019, on the eve of India’s current ongoing general elections, the Union Government declared a slew of additional subsidies for hydropower projects, but this seemed more for political economy reason, as also suggested by the timing of the announcement, just before the model code of conduct came into force on March 11, 2019. But the government needs to understand that even these additional subsidies for the already over subsidized hydropower sector is not going to help make them viable. When solar and wind power is available at price below Rs 3 per unit, why is there attempt to push large hydro whose cost is universally over Rs 5-6 per unit at least for first few decades.

In conclusion The writing is clearly on the dam walls: India needs to pay attention to optimizing generation from existing hydro and explore the possibilities of installing hydro projects at 97% of India’s existing large dams where there is no hydro component. We also need to first manage our peak hours’ power demand and optimize generation during such demands, only after assessing and addressing the social and environmental impacts of peaking hour power generation from large hydro projects. Else we will be destroying more rivers and their biodiversity and livelihoods of people dependent on such rivers, while throwing more money into the pockets of consultant, contractors, equipment suppliers and other vested interests. The Ministry of Environment and Forests and its Expert Appraisal Committee on River Valley Projects too needs take this opportunity to improve our pathetic environmental governance rather than keep pushing more clearances for projects that are only likely to remain paper horses.

[i] One Unit equals one Kilowatt hour, which is the power generated when 1 KW of installed capacity runs for one hour. The units are actually consumable and provide the correct picture of power available for consumption.