Above: All-India Summer Monsoon (June-September) Rainfall Anomalies during 1871-2015. Note that since 1950s, not only has the incidence of droughts increased, but rainfall in the excess of 10% has also decreased markedly Source: IITM Paper Interanual Variations of Indian Summer Monsoon

When it comes to Global Warming and Climate Change (not interchangeable terms), India and the world have witnessed a series of firsts in the past year. The last 11 months have been the warmest months in recorded history, each monotonously breaking a previous record[i]. In India, regions like Maharashtra including Marathwada have experienced back to back droughts, in addition to increasing frequency of Extreme Weather events like Hailstorms and unseasonal rainfall. Variability of Western Disturbances has increased, which is linked with extensive anthropogenic warming over Tibet[ii]. Our response to Climate Change and the challenges it poses has been far from satisfactory. There has been no impact of National Action Plan for Climate Change, due to the inherent problems in its inception[iii]. State Plans lay languishing for several years, without clear accountability and transparency[iv]. India’s INDCs (Intended Nationally Determined Contribution) indicate more harm than good.[v]

However, the Centre for Climate Change Research at Pune based Indian Institute of Tropical Meteorology (IITM)[vi] has provided some interesting studies and insights. SANDRP interviewed Dr. Roxy Mathew Koll, Climate Scientist at IITM, and an Adjunct Associate Professor at the University of Pune. Dr. Koll has worked as a Research Scientist at the Euro-Mediterranean Centre for Climate Change in Italy and as Visiting Scientist at the National Oceanic and Atmospheric Administration (NOAA), Maryland. He is currently leading research on ‘Indian Ocean warming’ and its impact on the Monsoon and the marine ecosystems.

SANDRP: Dr. Koll, what have your studies indicated about the warming of Indian Ocean and its impact on Indian Summer Monsoon?

Dr Koll: We have found (Fig 1)that western tropical Indian Ocean has been warming for more than a century, at a rate faster than any other region of the tropical oceans, and turns out to be the largest contributor to the overall trend in the global mean sea surface temperature (SST). During 1901–2012, the western Indian Ocean experienced anomalous warming of 1.28° C in summer SSTs. This warming of the generally cool western Indian Ocean against the rest of the tropical warm pool region alters the SST gradients, and has the potential to change the Asian monsoon circulation and rainfall, as well as alter the marine food webs in this biologically productive region. Besides direct contribution from global warming, the long-term warming trend over the western Indian Ocean during summer is highly dependent on El Niño–Southern Oscillation (ENSO) events, where too we have seen increased frequency and magnitude.

Even though a warming trend over the Indian Ocean may result in an increased supply of moisture locally over the ocean, it is not necessary that the surplus moisture is carried on to the peninsula. Most of the precipitation falls over the sea itself. This is because, due to reduction in thermal gradient between land and sea, less moisture laden clouds reach the land, more precipitation tends to happen on the sea itself.

Also, there is a direct link between Global Warming and Ocean Temperatures. According to the 5th Assessment Report of the Intergovernmental Panel on Climate Change[vii] 90% of the heat resulting from Global Warming during the last four decades has been accumulated in the oceans, making them veritable heat sinks. The periodic El Niño Events act as vents to exchange this heat from Oceans to the atmosphere.

SANDRP: How does a warming Indian Ocean affect Summer Monsoons?

Dr. Koll: Monsoon is a complicated phenomenon governed by a number of variables. But one of the key ingredients in summer monsoon precipitation is the gradient between land temperatures and sea temperatures. Due to a number of components, land warms faster than the sea. Cooler, moisture laden winds over the Indian Ocean thus come to the Indian Peninsula and monsoon precipitation starts.

But with an alarmingly warming Indian Ocean, this difference in temperature between landmass and the sea is reducing. Sea is warming faster than the land. This warm air has more capacity to hold moisture, without precipitating it. More moisture content in the air also means more intense rainfall events and a decrease in moderate rainfall.

This warming over Indian Ocean is linked to a number of causes, as we saw, but the main causes include increasing Green House Gas concentrations in the atmosphere trapping heat and increased frequency and magnitude of EL Nino events, leading to warmer sea temperature. Increased magnitude of El Niño events also result in a prolonged impact over temperature.

In some ways, Indian Ocean is different than Atlantic or Pacific Oceans. The latter are connected to the poles, with more chances of heat dissipation, while Indian Ocean is landlocked to the North, South and South East Asia. Hence, Indian Ocean traps heat more effectively, and lesser dissipation occurs. In many senses, we are more susceptible to the impacts of Global Warming than developed countries on the coasts of Atlantic and Pacific.

SANDRP: If this Indian Ocean Warming has been accelerating since 1950s corresponding with Industrial Era, do we see a long term impact on rainfall?

Dr. Koll: Climate models consistently show that, under increasing greenhouse gas, the land-sea temperature contrast increases due to enhanced evaporation (latent heat loss) over the ocean. Now logically, an increase in the land-sea thermal contrast should ideally increase the strength of the monsoon. However, actual observations do not provide any evidence for such a positive trend. On the contrary, the South Asian monsoon rainfall has decreased significantly during the past several decades and this time evolution is not well reproduced by the models used in the IPCC AR5. This is indeed intriguing and escalates the uncertainty associated with the monsoon in a changing climate. The Intergovernmental Panel on Climate Change (IPCC) Fifth Assessment Report (AR5) is suggestive of the uncertainties looming over the status and fate of the monsoons.

Observations show (Fig 3) that summer monsoon rainfall during 1901–2012 has a weakening trend over parts of South Asia. The reduction in summer rainfall over central-east India during the past century is about 10–20%. In the past 15 years, 5 years have seen a drought. The reduction in rainfall is significant over the central-east and northern regions of India, along the Ganges-Brahmaputra basins and the Himalayan foothills. Marathwada region also shows a decrease. As we discussed, Indian Ocean warming, along with a relatively subdued warming of the Indian subcontinent, has played a key role in weakening the land-sea thermal contrast, a major driver of the South Asian monsoon. The weakened land-sea thermal contrast dampens the summer monsoon Hadley circulation, reducing the rainfall over the central Indian subcontinent. 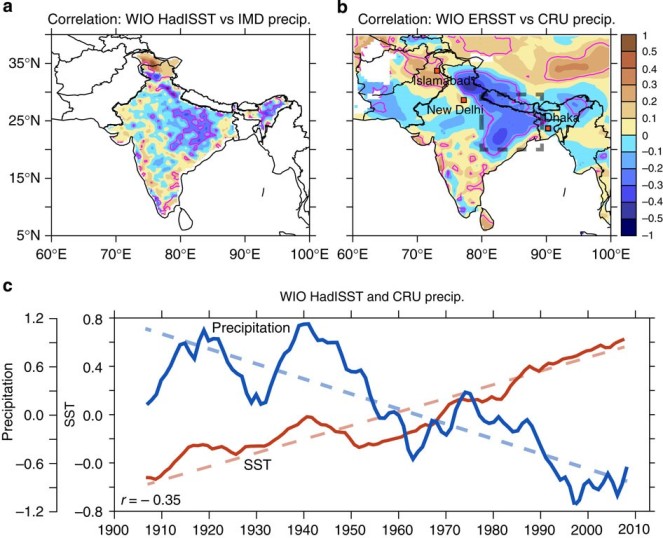 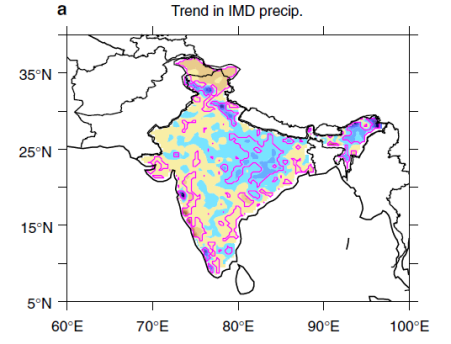 Our analysis indicates (Fig 4) a significant weakening trend in summer rainfall during 1901–2012 over the central-east and northern regions of India, along the Ganges-Brahmaputra-Meghna basins and the Himalayan foothills. Earlier studies have suggested an increase in moisture availability and land-sea thermal gradient in the tropics due to anthropogenic warming, favouring an increase in tropical rainfall. But, enhanced Indian Ocean warming potentially weakens the land-sea thermal contrast, dampens the summer monsoon Hadley circulation, and thereby reduces the rainfall over parts of South Asia.

A recent study30 suggests that enhanced warming to the north of western Indian Ocean in recent decades has also led to a poleward shift of the core of low-level monsoon winds, increasing the precipitation to the north of the Western Ghats, while weakening it over the southThis dipolar rainfall pattern between the south and north of the Western Ghats is also found to be associated with the western Indian Ocean warming.

Some of these studies suggest that, though the extreme rainfall events have increased over some regions, the frequency of moderate-to-heavy rainfall events has decreased over the subcontinent. In fact, studies from our colleagues in CCRC in IITM indicate a marked increase in Extreme Weather Events during the past century.

SANDRP: El Nino South Oscillation Events have a considerable impact on Monsoon Circulation. Have we seen any trends in this regard in the past century?

Dr. Koll: El Nino events are characterized by warm band of water developing in the central and east central Pacific, and are not a recent phenomenon. El Nino is generally followed by a weakening monsoon and a stronger north east monsoon, like we witnessed this year, which was the strongest El Nino on record. We had a weak monsoon, but North East monsoon lashed Chennai. What we see (Fig 5) now since roughly 1950s is a tilt in EL Niño events. Their frequency is increasing and so is the magnitude. Not only is this affecting and weakening the South West monsoon on which India and South Asia depends so heavily, but it is also adding to the extended warming of the Indian Ocean, with long term compounding effects.

Generally, El Nino is defined by a rise in ocean temperature by 0.5° Celsius or more. This time the temperature anomalies went up to almost 3° Celsius, making 2015 one of the strongest El Ninos in recorded history. It is significant to note that in the past 140 years, the three strongest El Nino years were 1982, 1997 and 2015.

SANDRP: Is there any way to halt or reduce this Warming or warming trend over Indian Ocean or reduce its impact? Will cutting emissions now help?

Dr. Koll: Unfortunately, very little can stop the onward temperature march right now. The damage has already been done. We need to reduce emissions in any case to avoid future problems from arising, including reduce future warming trends. And it has to be a collective effort between Developed and Developing Nations, with Common but Differentiated Responsibilities. Also, we need to adapt and mitigate the impacts of this change in a more informed and serious way. My message would be to prepare now. We are predicting good monsoon for 2016. Now is the time to be prepared to harvest rain, to tackle high intensity rainfall, to protect the top layer of the soil from being washed away, to increase tree cover and regulate surface temperatures and to take Climate Change Seriously. We need to effectively integrate the predictions in all our planning, be it Water Resources or Disaster Management. Unfortunately, the data sharing that happens even between Government departments is far from being proactive. If we get State of Art data from Institutions like Central Water Commission, ISRO, Groundwater Boards, etc., it can help us in planning and forecasting much better.