The hilly state of Uttarakhand has been witnessing severe weather conditions for most of April and first week of May 2020. The repeated incidents of rainfall, snowfall, and hailstorm have hit the mountain farmers hard.

Following rain and hail spell in Yamuna valley on April 15, 2020  the food crops and cash crops were damaged. The water level in Yamuna also increased significantly trapping vehicles which are using riverbed to go across in absence of bridge at Gangani.

As per April 19, 2020 Dainik Jagran report, the farmers in plain areas were not able to harvest food crops due to lock down restrictions and the continuous disturbance in the weather has affected the produce.

On April 21, 2020 the Mori and Pratap Nagar area of Uttarakashi and Tehri district again faced heavy rainfall and hailstorm incident impacting apple flowering and other farm produce and thus livelihood of farmers.

Then again on April 24, 2020 the Yamuna valley received heavy rainfall damaging crops in Naugaon, Badkot, Purola. As per villagers it was raining intermittently every day. In Naugaon area there were damages to irrigation and water supply structures on account of heavy rainfall.

The last week of April 2020 has particularly seen repeated rainfall, snowfall and hailstorm activities across the state further affecting the plight of farmers.

He also says such hailstorms spell have not been witnessed in past many years and the size of the hail was bigger than usual resulting in destruction of cash and food crops. Additionally there were heavy rains causing flash floods in local streams which has also damaged irrigation channel, water supply pipes and farm lands in Sunara village.

“So far government has not taken steps to compensate farmers this year. Even the amount under disaster relief (some people got in previous years) is meagre and hardly covers even the basic investment on crops”, adds Ramola demanding that the compensation amount must be increased.

According to agriculture department survey by April 29, 2020, crops on around 1679.41 hectare land which is about 50 percent of total farming area in Rishikesh were damaged resulting in losses of Rs 4.10 crore to farmers.

Following this on May 1, 2020 several parts of the state in Garhwal and Kumaon region received heavy snowfall and rains significantly damaging food and cash crops. Villagers in Rudraprayag said that this much hailstorm in the month of May was seen after many years. The rain and hail has also caused damages to roads and impacted houses in Badkot, Uttarkashi. 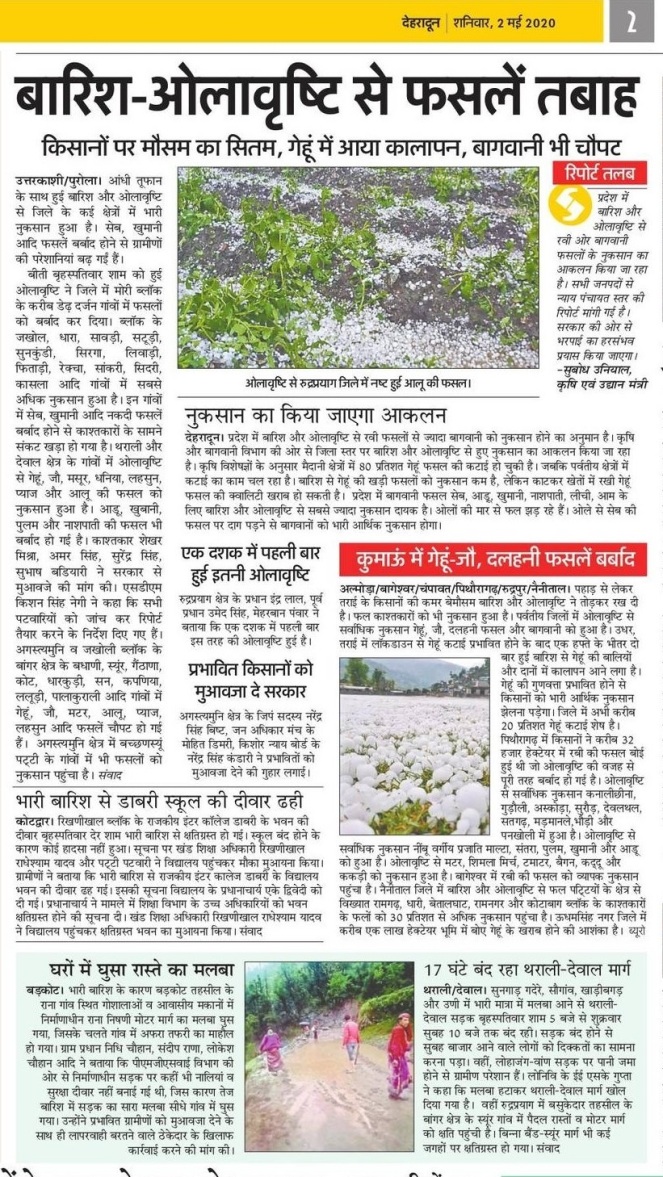 The Hindustan Hindi on May 1, 2020 provided ground report from twelve districts that details the impact of non-seasonal rainfall, snowfall on farming, cash crops and farmers in the state.

On May 02, 2020 the Yamuna valley witnessed severe weather condition again. The hailstorm and high speed winds not only damaged horticulture, vegetable crops but also damaged the houses in the area.

Even on May 2, 2020 several blocks of Uttarkashi and Chamoli registered heavy hailstorm damaging horticulture, cash and food crops. The invasion by wild animals has also worsened the precarious situation of farming sector.

It seems there was a flash flood in the river by the evening same day as reported in Dainik Hindustan (Hindi) report. Local people were taken aback by seeing floods in river which they said was unusual in pre monsoon months.

Even on May 3, 2020 there was no halt in weather vagaries. The continued rains and hailstorm incurred huge losses to farmers involved in fruits, vegetables and traditional crops cultivation across the state.

Same situation prevailed on May, 04, 2020, too where the wind storm uprooted trees in Yamuna valley causing damages to houses. Increase flow in Ganga and Yamuna led to erosion of approach road and temporary bridges in Uttarkashi. The Gopeshwar area saw hailstorm damaging vegetable and food crops. The higher reaches faced snowfall.

According to survey of Agriculture and Horticulture department, (Amar Ujala, 05 May 2020)  the rain and hailstorm events since April has led to damages of food crops on 13290 hectares of land and horticulture crops including flowers, spices, vegetables and fruits on 15878 hectares of land. The total financial losses to farmers are estimated as Rs 28 crore.  As per the farmers would be compensated through Mandi Samitis once report is filed by Disaster Management department.

Meanwhile the rain, hailstorm continued on May 6, 2020 in different parts of state. The Uttarkashi district and Yamuna valley has been severely affected.

The farmers in Purola, Naugaon, Badkot again suffered huge losses. There was intense rain in Naugoan causing road blockage due to debris flowing down mountain stream.

The other parts of Garhwal region including Tehri, Rudraprayag, Pouri, Chamoli also faced rains and hailstorm. In Tehri villagers alleged that dumping of Udamand- Rauta road widening debris down the slopes has become a safety threat of Naalduga village houses. The Badrinath area witnessed snowfall.

The small farmers in the Thailisain block of Pouri district have also been suffering from irregular weather impacting food crops. “It’s rain or hailstorm after every two of three days for past one month. We have not seen this freak weather condition in the region in the month of April and May. Most of wheat crop has been damaged and remaining crop is getting decayed in fields”, laments Shyam Singh Belwal a farmer of Syunsal village in Patti Chauthan to SANDRP. He also says that the wild animals are also adding to the miseries of farmers. The local administration reports these losses rarely and compensation by government is even rarer.

Villagers in Jakholi block, Rudraparyag said that the flash floods in seasonal stream flushed the farming land with debris destroying crops. The hailstorm has turned the farmland in a white sheet of ice.

The situation in Chakrata area of Dehradun is equally bad where hailstorm has affected large area under farming activities.

IMD data on Rainfall distributation and departure in the state from March 01 to May 06, 2020.

Meanwhile, the rain and hailstorm event saw no pause even on May 7, 2020. As per reports, 70 percent of  mango and lychee produce has been damaged.

Kuldeep Tomar, a farmer in Hathiyari village of Vikas Nagar, Dehradun told SANDRP that around 60 percent of his mango crop and 20 percent of lychee crop have been damaged by recurring hail and wind storm in the region. Wheat has also seen significant damage.

“Hailstorms with such intensity and scale has not been seen in the area for years. The local administration has not started surveying the damages. It’s highly unlikely that we will be compensated”, feels Kuldeep. He further says that the weather vagaries have affected the marginal farmers in the area significantly.

In Gairsain, Tharali area of Chamoli horticulture, cash crops have also been damaged. Affected farmers have started demanding compensation. The opposition party has claimed financial losses worth Rs 100 crore to the farmers and not of Rs 28 crore estimated by the government. There has been demand to declare prevailing scenario as natural disaster to compensate the farmers. Meanwhile, the weather department has again warned of hail and rains on May 10-11, 2020.

Of late, the farmers mostly growing for sustenance in hilly state have been at the receiving end of irregular weather patterns. The excessive pre-monsoon hailstorm and rainfall seems to be making it worse for them this year. However, the state and central governments have largely been in silent towards farmers plight and changing climatic conditions.

“This weather pattern is certainly unusual and hints at changing climate impact. Rain is not that much abnormal but hailstorms frequency and intensity is really something to worry about”, says Manoj Matwal an environmentalist who heads HARELA initiative in Pithoragarh. He told SANDRP that the sudden fluctuation in temperature in the area could adversely impact life cycle of cold blooded animals specially the insects which are very important part of pollination and food production. 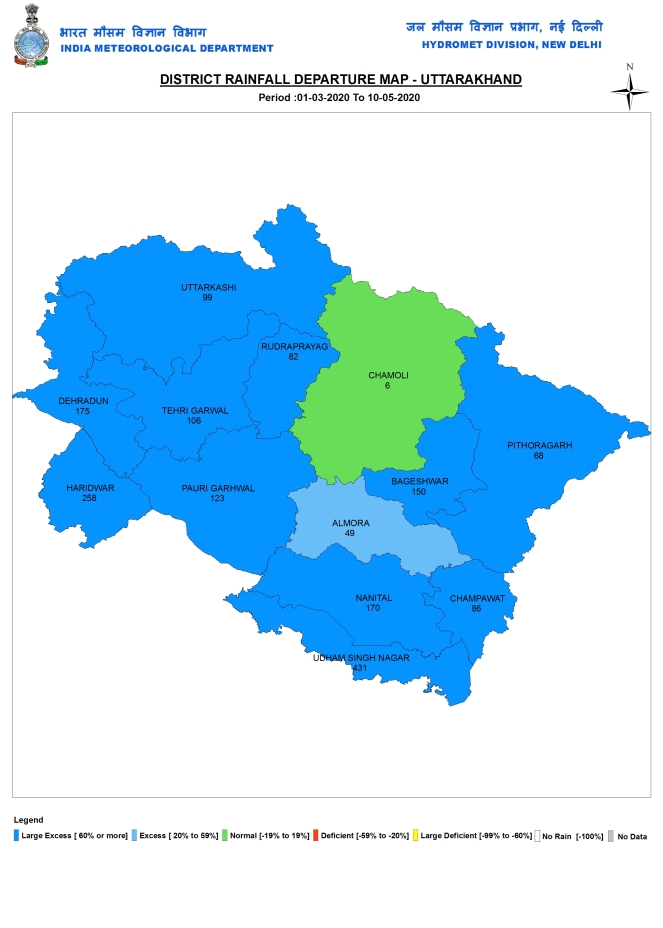 The Uttarakhand State Disaster Management Authority is headed by the state Chief Minister Shri Trivendra Singh Rawat as the USDMA website (http://www.usdma.uk.gov.in/) says, but the website has no report or action plan regarding this tragedy the Uttarakhand farmers are now facing.