Through its order on April 9, 2013 the Mumbai High Court has asked Maharashtra Govt to release water from upstream dams to  Ujani dam for mitigating drought in Solapur. The decision is welcome if the water released from upstream dam were to be used for the drought affected in Solapur. A division bench of Chief Justice Mohit Shah and Justice M S Sanklecha directed the government to release as much water as possible within 24 hours. The High Court’s order came in response to a PIL filed by a Solapur-based activist, Shankarrao Sathe. The PIL says that the Ujani dam gets water from the Bhima River which starts from Karjat in the Western Ghats. Between the source of the river and the dam, there are 20-22 dams. 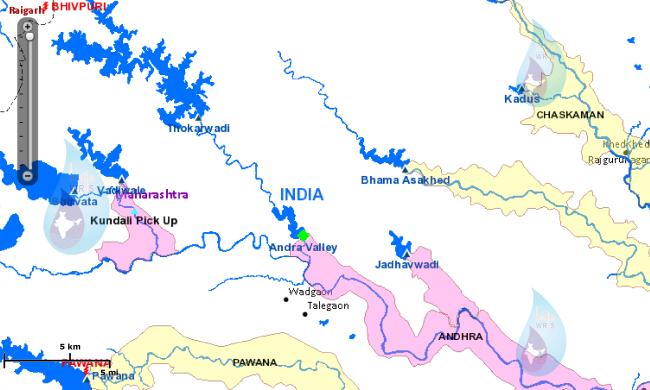 Highly-placed sources informed that soon after the High Court order, a high-level meeting was held in Mumbai to discuss the issue of release of water for Solapur as per the court orders.  Senior officials from Sinchan Bhavan in Pune attended the meeting which explored the options best suited for release of water to Ujani dam. The sources informed that it is likely that 2.5 TMC (70.8 MCM) water would be released from Bhama Askhed dam while half a TMC (14.16 MCM) water would be released from Andra dam, the WRIS map above shows the location of both these reservoirs. The water release would start from April 10, 2013, an official said. Bhama Askhed dam has design live storage capacity of 208.11 MCM and as per the latest (April 8, 2013) information, the dam had 124 MCM. Andra Valley dam has live storage capacity of 82.75 MCM. Both are irrigation and hydropower projects.

However, the moot question is, how much water would actually reach Ujani dam and how of that, how much water will really reach the drought affected people. Under the current circumstances, it is seriously doubtful if any significant proportion of the water released from upstream dams would reach the drought prone people, unless specific steps are taken to ensure the water is not diverted for non drought relief purposes.

In that context, it needs to be noted that the water released from Bhama Asakhed and Andra Valley dams will have to travel about 250 km before it would reach the Ujani Dam. A very large portion of the water would be lost in evaporation and seepage and some also would be taken out by the enroute farmers as happened in the past with other water releases in Maharashtra earlier this year.

Moreover, Bhama Asakhed dam has irrigation potential of 29,465 Ha, but as per Irrigation Dept white paper, had irrigated area of just 434 ha by June 2012. The dam has 124 MCM storage now because it has not developed its irrigation potential over a decade since the dam has been completed. Why has that irrigation potential not realised? Pune has been eyeing water from Bhama Askhed for augmenting its water supply for a long time now, a demand backed by the same politicians who made mocked drought affected farmers.Similar questions also arise for Andra Valley dam.

Unfortunately, the Maharashtra Water Resources Department has never been able to control unauthorised use, let alone promote equitable usage of water from canals, dams and rivers. In our earlier blog, we showed how, even when it was clear that Maharashtra was going to face serious drought in 2012-13, no attempt was made to curb sugarcane farming, running of sugar mills or wine distilleries even when district officials have asked for such steps. This is also highlighted in the current drought, water conflicts in Manmad, in Nandur Madhyameshwar, in Mula Dam for Jayakwadi could not be resolved by the Water Resources Department.

With this background, though it is indeed a welcome decision that HC has ordered water release for Ujani from Pune Dams, it will be doubtful how much of that water will reach the purpose and area that it is meant for. The fact that all dams in a basin should have uniform water by the end of October is enshrined in the MWRRA Act 2005. It says:

Section 11: Power, functions and duties of the Authority states:

“in order to share the distress in the river basin of sub-basin equitably, the water stored in the reservoirs in the basin or sub-basin, as the case may be, shall be controlled by the end of October every year in such way that, the percentage of utilizable water, including kharif use, shall, for all reservoirs approximately be the same”.

However, the establishment has made a mockery of this law by actually claiming that[1] MWRRA does not effectively exist as it does not have a Chairperson or expert members!

How can we then depend on the same WRD to ensure that water reaches Solapur and affected regions? When we know that the Khadakwasala RBC and LBC as well as Ujani RBC and LBC canal systems are leaking and in a state of dispair? That there are hundreds of unathorised lifts and siphons all along the way from Pune to Solapur?

Mismanagement and misuse of Ujani water has reached its new heights during this drought, when, the dam water was supplied water exclusively to sugarcane lobby and factories.

Under the circumstances, firstly, the High Court and the Govt of Maharashtra, in stead should consider the option of stopping the west ward diversion of water from the six Tata dams, as that would provide much more substantial water for the downstream Bhima basin.

Secondly, the High Court should also direct Maharashtra govt to formulate a policy for reservoir operations so that through out the filling period, there is sufficient water releases from all dams so that at the end of the monsoon, dams in any basin or sub basin have equitable water storage. This will ensure that High Court orders does not remain a fire fighting step, but has longer term implications.

The High Court would also need to ask the State govt as to what steps it has taken to ensure that the water released for Ujani actually goes to the deserving drought prone area and also what steps have been taken to stop the unjustifiable, unviable and unsustainable water use activities like westward diversions, sugarcane cultivation and sugar mill operations in drought period are stopped. Without all these steps, the welcome decision of High Court may not really serve the purpose it is supposed to serve.

3 thoughts on “HC asks Maharashtra Govt to release water for Ujani: But will it help the drought affected?”