Above: Nagpur or Anantnag? Hailstorms of March 2015 in Nagpur  Photo by: Atul Patne

On the 11th March last year, we wrote about hailstorms in Maharashtra. Back then, the hail, unprecedented rains, strong winds and changes in temperature had affected more than 10 lakh hectares, mainly in Marathwada and Vidarbha. After near-exact one year, we write about the issue again.

Late February and March rains have battered farmers in Vidarbha, Konkan, Marathwada and Uttar Maharashtra (Nashik, Jalgaon and Dhule Districts). Preliminary estimates state that over 8.5 lakh hectares of crops have been impacted in just 17 days and thousands of farmers and landless laborers have been affected.

Same stories stare at us again: wheat ripe and ready to harvest completely destroyed, grapes withering on the vine, just shy of harvest, onion crops beaten to the ground, jowar fields swept away, mango blossoms lost..Rabi crops, summer crops, horticulture as well as vegetables have been severely affected. This looks like the most serious climate disaster in the current year when the entire state is in the midst of a bad drought, with Rabi sowing down by nearly by half in regions like Marathwada. Most affected farmers this time around are from Konkan, Vidarbha and Uttar Maharashtra. On 15th March 2015 hundreds of angry grape farmer from Nashik held up trains for hours in protest. Their frustration  has reached its peak as they suffer a double whammy: heavy losses in December 2014 too, due to unseasonal rains and now this fresh disaster.

The rainfall anomaly in Maharashtra, as also the entire country, in the first week of March as captured by IMD is startling. It shows % departures from long term averages exceeding 100% in most districts in Maharashtra, in some like Ahmednagar, the anomaly crosses 2000%! Strangely this does not catch the rains in Nashik or Konkan region. The most parts of the country show a positive rain anomaly. 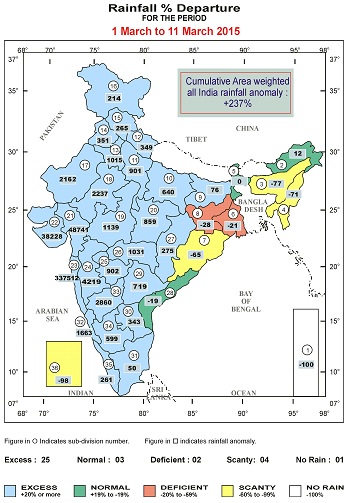 Like the last year, one of the major reasons behind this phenomenon of early spring rains as per IMD (and other sources) is Western Disturbances and associated systems like Upper Air Troughs.

Western Disturbances (WD) are not an unnatural phenomenon. According to Skymetweather, they are defined as “a low pressure area or a trough over surface or the upper-air in the westerly winds regime, north of 20°N, causing changes in pressure, wind pattern and temperature fields. It is accompanied by cloudiness, with or without precipitation.” The term was coined by Indian meteorologists describing systems moving from the west to east. WDs originate in the Caspian Sea or the Mediterranean Sea as extra-tropical cyclones and gradually travel across the middle-east from Iran, Afghanistan and Pakistan to enter the Indian sub-continent. The rains brought by WDs are actually beneficial and much needed for Rabi crops.

However in the recent years, Western Disturbances have played an important role in a  number of Extreme Events from Uttarakhand Disaster in June 2013 to unseasonal rainfall in Maharashtra in March 2014 and December 2014 and again now in March 2015.

Is there a Climate Change Connection?

The paper, ‘Changes in western disturbances over the Western Himalayas in a warming environment’, authored by R. K Madhura, R. Krishnan, J.V. Revadekar et al and published in International Journal of Climate Dynamics in May 2014, states that the precipitation in Western Himalayan (WH) regions is affected by Western Disturbances (WD) which originate in Mediterranean region and travel eastwards as troughs and cyclonic lows embedded in westerlies. WH region has experienced significant rise in temperatures post 1950s and studies indicate an increase in occurrence of extreme precipitation events in the recent decades (Uttarakhand disaster in June 2013 and floods in Jammu and Kashmir in  September 2014 are the latest examples. Both were linked with Western Disturbances).

The paper states: “Our analysis suggests that pronounced warming over Tibetan Plateau in recent decades has favored temperature gradients in mid and upper tropospheric levels in the region. This warming trend in mid troposphere has led to increased instability of westerly winds, which has resulted in increased variability of Western Disturbances and higher chances of heavy precipitation events.

The winter mean temp at high elevation Tibetan plateaus (2000 mts plus) has increased at a rate of 0.6 degrees C per decade since 1960s. In addition, the rate of warming in mid latitudinal region has been higher than the equatorial region, thus resulting in decreased temperature gradient between equatorial and mid latitudinal regions. This change in gradients  is forced by concentration of GHG emissions. Such changes in gradients also affect extra tropical cyclonic systems and WDs.

The study states: “Our analysis suggests that the pronounced warming over the elevated Tibetan Plateau in recent decades has been an important factor in influencing the regional weather systems and the heavy precipitation events over the WH region.”

The warming of Tibetan Plateau is happening possibly thrice as fast as elsewhere in the world, some allude to what is happening in Tibet as Ecosystem Shift. Glaciers in Tibet are melting at some of the fastest rates in the world.

The link between warming Himalayas and increased extreme precipitation events holds direct implications for the developments happening in the region, especially badly sited hydropower dams & their role in increasing the proportions of the disaster as happened in June 2013. This role has been accepted even by the Indian Ministry of Environment and Forests in  an affidavit in the Supreme Court. Earlier, the Ministry was trying hard to brush the entire episode under the carpet as a one off freak incident.

At the same time, this study is not limited to precipitation over Western Himalayas only. It has concluded that variability of Western Disturbance phenomenon itself has been increasing due to warming signals over Himalayas. This holds implications not only for Uttarakhand, Jammu and Kashmir, Himachal Pradesh, Sikkim & North East India, but also for farmers in Maharashtra (& rest of peninsular India) who lost their entire year’s grape harvest and the small holding farmers who watched their wheat getting destroyed in front of their eyes.

We cannot ignore the reality of anthropogenic climate change and its impact on our most vulnerable populations any more. Serious and robust Climate Change Action Plans are the need of the hour, but as we showed through RTIs, Maharashtra does not even have a rudimentary State Action Plan for Climate Change in place, despite TERI being given the responsibility in 2009 and despite spending crores on the initiative. At the same time, India’s National Action Plan on Climate Change exists on paper since 2009, but has not played ANY role in any climate related disaster mitigation. This is the rue of most state action plans too.

Maharashtra’s crop insurance scheme as well as Weather-based insurance is full of holes. As a farmer said, even one mm of rain in harvesting season spells disaster for crops, but Crop Insurance scheme only talks about failing monsoons or droughts. This is a classic example of how a system refuses to be flexible and responsive in face of Climate Change challenges. Relief packages can only be a temporary respite in such a situation. Mango farmer from Ratnagiri Abhay Dandekar who has lost nearly 70% of his produce says that compensation of Rs. 100 per mango tree with a failed harvest is a making a joke of the farmers. In addition, the National budget outlay for Crop based and Weather based insurance schemes has seen a cut in 2015-16 budget.

Climate Change demands taking a pro-active and just stand. It demands scrapping climate unfriendly infrastructure like hundreds of large dams in Himalayas, it demands rethinking  coal emissions, stopping further deforestation for coal and bauxite mining, for infrastructure projects, SEZs and dams. We have simply changed the name of the Ministry of Environment and Forests to Ministry of Environment, Forests and Climate change, but see no change in what is happening there. [It increasingly sounds Orwellian situation: Whenever a new symbolic step is taken, one needs to be aware if this is a signal for more problematic actions.] It is time to take strong action at local as well as global levels, take a firm stand in international climate negotiations without hiding behind our poor about global as well as national emissions. But most importantly, it is high time we identify the vulnerable sections and ensure quick justice and relief for them.

Unlike what Prime Minister Modi’s book says, simply “Convenient Action” cannot show the way ahead. The way ahead may not be ‘convenient’ as we know it. We need “Necessary and Strong Actions” to combat climate change and help our food producers ( and hence us!) from suffering losses year after year.