In May 2019 SANDRP wrote, with photo evidence, after a visit to the Drain No 8 that brings Delhi’s drinking water that it is running next to drain no 6 carrying untreated industrial toxics from Haryana, with only sand bags separating the two. A visit on 21st July, 2020 provided video proof that water from drain no 6 is still happily mixing with drain no 8 at several places.

A visit to drain number 8, one of prominent canal carrying potable water supply of national capital can be shocking experience to anyone concerned with water quality and health of people. The canal (called escape) flows close to Delhi Haryana border in Sonipat district. The drinking water in the escape is being repeatedly contaminated with all sorts of industrial effluents.

About the drain number 8 and 6

Drain number 8 off takes from Western Yamuna Canal (WYC) near Garhi Bindroli village in Sonipat. It runs west to east for about 20 km before discharging the Delhi’s share of potable water into Yamuna river at Palla village. From there Yamuna river brings the water to Wazirabad Water Treatment Plant, where it is treated and supplied to citizens of Delhi.

Drain number 6, originally starts from Smallkha area of Panipat district. The around 60 km long drain runs north to south and is filled with all sort of solid and liquid waste discharged by industrial units and residential areas in its basin, it is supposed to bring it all to supplementary drain/ Najafgarh drain and through it to Yamuna river, downstream of Wazirabad barrage.

Both parts of drain number 6 are merged at Shivpuri colony. From here, the drain no 6 is diverted into another drain which runs along GT Karnal road, before emptying into supplementary drain near GTK bypass in Delhi. Then the heavily polluted drain merges into Najafgarh nullah which dumps the toxic load in Yamuna river just downstream Wazirabad barrage.

In fact, about 10 km course of drain number 6 is carved out inside drain number 8 by Haryana govt. Apparently a 9 inch wall separates both the drains from intermingling. However the wall has broken and weakened at several locations along its course. Ironically, the Haryana govt has been placing sand bags to prevent contamination of drinking water.

However, breaches of the wall separating drain no 6 & 8 are frequent throughout the year, and overspill episodes are inevitable during seasonal and un-seasonal rains. The sudden and big changes in discharges in either of the drains for several reasons also end up contaminating Delhi water supply canal. These include, for example sudden stoppage and restart of the flow (e.g. due to accident or cleaning or some maintenance work), sudden release of storm water among others.

On July 21, 2020, during my visit in that area, I visited Shivpuri Colony to check if some steps have been taken to address the same problem raised by SANDRP in May 2019[i].

Underneath the bridge on GT road, the industrial effluents from drain number 6 were overflowing into drain number 8 at two places. The colour of effluents was black with stinks of industrial waste. Possibly, like the situation we round during visit in May 2019, the CETP (Common Effluent Treatment Plant) Kundli was discharging the pollutants into drain number 6 without any treatment.  More information on Kundli CETP can be seen here[ii].

Hardly 50 metre downstream, there was huge solid waste heap dumped along the slope of left bank of drain number 8. All of these shows that Delhi’s drinking water is regularly getting toxic mix.

It has been widely known and reported that the industrial effluents in the area are laced with heavy metals including chromium, lead, and mercury, etc. among other toxic pollutants. The effluents treatment plants are not able to detect and remove these chemicals. Several official reports have revealed that Kundli CETP and other effluent treatment plants in the industrial areas of Panipat, Sonipat have not been functioning properly and just by-passing the industrial waste into water sources. 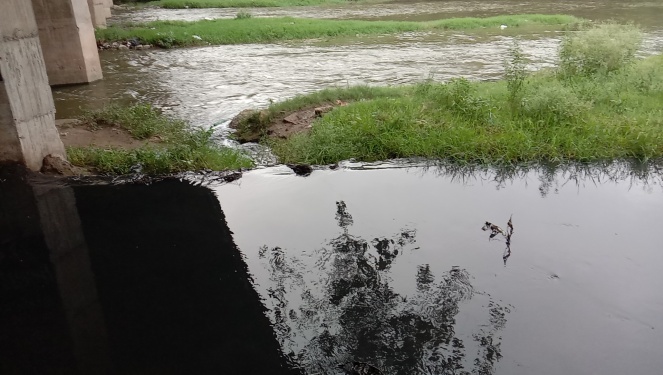 The fishermen at Palla[iii] have been complaining of recurring fish death events at Palla on account of discharge, breach and over spill of industrial pollution in drain number 8. Moreover, the water treatment plants in Delhi are possibly not equipped to detect and treat a number of toxic elements getting into the raw water, including heavy metals. As carcinogenic, the heavy metals are known for causing skins, lungs diseases including cancer. However, the concerned govts do not seem bothered about these serious risks.

Ignoring the problem won’t solve it

Over the years, the Haryana govt has created drains like ditch drain in Yamuna Nagar, and drain number 6 in Sonipat with an objective to keep the industrial and sewage effluents separate from the Western Yamuna Canal and drain number 8.

However, the pollution treatment mechanism including STPs, ETPs, CETPs have been regularly & frequently malfunctioning in the state. On the other hand, the amount and toxicity of waste water have only increased enormously in these drains. The plan of separate drains for the pollutants was faulty to begin with. The evident mismanagement of pollution abatement mechanism in the state has further defeated their very purpose.

Clearly, its sheer inefficiency, negligence & possibly worse on the part of Haryana govt that has left the water quality of drain number 8 and river Yamuna unacceptably contaminated. The Delhi govt too has been apparently silent on the critical issue concerning public health.

In order to change the prevailing situation, the functioning of CETPs must be made effective, transparent and accountable. The treated effluents has to be reused and recycled in industrial activities. Under no circumstance, the industrial effluents can be allowed to be mixed up with drinking water sources.

The Delhi Jal Board, the Central Pollution Control Board and Haryana State Pollution Control Board must immediately initiate action to stop this mix up of industrial effluents from Drain no 6 with drain no 8. Moreover, HSPCB and CPCB must act to ensure that CETPs function, failing which, take action against the polluting industries and shut down the non-complying units in Kundli and Sonipat industrial areas.

The apathy on part of central and state govts’ agencies show that they have been deliberately neglecting the health of people. If they fail to act now and pollution of drain number 8 is not addressed, the situation is bound to turn into health disaster sooner rather than later.