Karnataka is one of the four southern states of Peninsular India (Figure 1a), came into existence with the passage of the States Reorganisation Act (1956, Nov 1) and is located 11°30′ North and 18°30′ North latitudes and 74° East and 78°30′ East longitude (https://en.wikipedia.org/wiki/Geography_of_Karnataka). The state covers an area of 191,976 km² (5.83% of India‘s geographical area). Karnataka is the eighth largest Indian  state by area, the ninth largest by population and comprises 30 districts (figure 1b) divided in to 4 administrative divisions, 270 towns and 29406 villages (http://ssakarnataka.gov.in/). The state is situated on a table land where the Western and Eastern Ghats ranges converge into the complex, in the western part of the Deccan Peninsular region of India. Karnataka is bordered by the Arabian Sea to the west, Goa to the northwest, Maharashtra to the north, Andhra Pradesh to the east, Tamilnadu to the southeast, and Kerala to the southwest.

Rivers are a source of water for drinking, irrigation and electricity generation in Karnataka. Most of the rivers originate in the Western Ghats that generally flow westward meet the Arabian Sea after a short run varying from 50 kilometres to 300 kilometres. Almost all the major east-flowing rivers are inter-state rivers and runs towards the eastern side of the state and drain towards the Bay of Bengal. 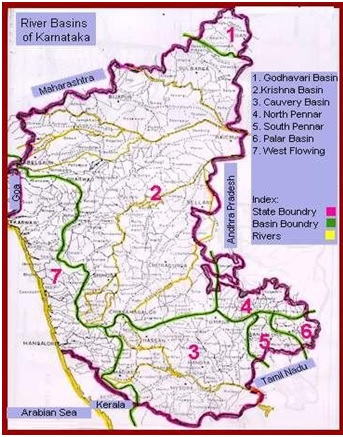 There are seven rivers (Figure 1c) in Karnataka