River Yamuna is fifth longest river of India. For past many centuries the river has been integral part of Indian culture. It has been sustaining means of livelihoods to millions. Many, in pursuit of spiritual inspiration venerate it with great hope. But at present, the river is more in news for its highly polluted state. In this blog SANDRP attempts to presents the picture of the River Yamuna. The blog also briefly mentions the places of cultural, religious, historical and environmental significance on and around the river, pointing out the various factors which has led to present state of the river.

Introduction River Yamuna originates from frozen Champasar lake located in Bandarpooch Glacier at a height of 6387 meters (380 59′ N 780 27′ E) in Har-Ki-Doon mountain range of Uttarkashi in Uttarakhand. It runs through series of snow capped and forested valleys in Himalaya before entering the Indo-Gangetic plains of north India. After traversing for 1376 km finally the river merges into River Ganga at Allahabad, UP.

A view of Bandarpunch Glacier

Scared places along River Yamuna The origin point of River Yamuna is famously known as Yamnotri shrine. It is listed among four prominent pilgrimage places (Char Dham) in Uttarakhand and thousands of pilgrims thronged to it every year. In fact Yamnotri is considered as first shrine to be visited while on this pilgrimage. Entire Yamuna valley is full of many scared shrine and mythological sites devoted to saints and legends of ancient era.

A list of prominent holy shrines and mythological sites is mentioned in below Table-1.

Besides this there are many more religious and mythological sites not fully known about but present inseparable connection between River Yamuna and the era they belong to.

According holy books Yamuna is Daughter of Lord Sun and sister of Yamraj (God of Death) and Shani (God of punishment). Hence it is believed that taking a bath in Yamuna absolves one of worldly sins. Yamuna river is also called Jamuna and Kalndi at different places along its course. The life of Lord Krishana is profoundly related to River Yamuna.

“Pushtimarg” is a 500 year old sect of Hindu Religion, founded by Shri Vallabhacharya one of the five main Acharyas of the Hindu Religion. Pushtimarg is made up of two words Pushti and Marg. Marg means path, here it means path to go near God. The devotional movement is based on the idea that love of God should be seen as an end in itself, not as a means to something else. Krishna is the chief deity of the sect. Yamuna is worshiped as his fourth consort (chaturth Patrani) and is the goddess who ordered Shri Vallabhacharya to recite Shrimad Bhagwat near her banks. It is for Yamuna, Vallabhacharya composed Shri Yamunashtakam. In Pustimarg Yamuna River has three forms: spiritual, physical and of a goddess and without River Yamuna worshipping rituals are considered incomplete.

Every year on the sixth day of summer Navratra, the birthday of Yamuna is celebrated in Mathura. The festival of Bhaiya Dooj is also devoted to the love of Yamraj and Yamuna River. Besides this thousands of people every month take dip in Yamuna River at various places on occasion of full moon and no-moon nights and during Sunday and Saturday to get rid of sins and worldly woes.

River Yamuna provides sustenance to about 57 million people throughout its course. The river annually carries 10,000 cubic billon meters (CBM) of water of with 4400 cbm is used for irrigation. It also supplies 70 percent of Delhi’s potable water.

Over 70 rivers feeds River Yamuna. Many smaller streams have not been included in the list. Most of Yamuna’s tributaries are now dry or polluted, except Ken, Sind, Betwa, Chambal and few others which revive River Yamuna in lower segment. Most of the larger tributaries also emanate from Rajasthan and Madhya Pradesh but joins the river in UP region.

Aquatic and Riparian wildlife  The pisciculture is neither practiced on large scale nor undertaken in organized manner in the river Yamuna. However, the entire river stretch and tributaries is being utilized for fishing in unorganized manner.

In Himalaya stretch the Aglar River, Nain Bagh is locally popular for its fish varieties and numbers. Local residents now report of sharp decline in Mahseer fish numbers in and around Dakpathar, Dehradun stretch.

In Yamuna Nagar Haryana a survey titled The Abundance of Avifauna in an Agricultural Landscape: A Benefit of Community Conservation Initiatives in Haryana, India published in Indian Journal of Science and Technology in 2014 have recorded 79 riparian and aquatic bird species inhabiting and visiting River Yamuna and local tributaries Somb and Thapana. Peace Institute Survey in 2012 even found Mahseer fish in Thapana river.

For next 200 km between Hathini Kund Barrage Haryana and Wazirabad Barrage Delhi, River Yamuna has turned seasonal flowing for few months in a year. Lack of flow in river has severely impacted the river, including the variety of aquatic life. However few fishermen obtain fishing permit from Haryana Fisheries Board and report recurring annual losses due to non availability of waters in the river.

All these barrages are in first 700 km stretch of River Yamuna. Delhi in a span of 22 KM has built 3 barrages on it. Dakpathar is the first barrage on Yamuna and Hathini Kund is reason behind a dry Yamuna in lean season. All these barrages have damaged the natural integrity of the river. Despite that all the riparian states are planning to build more barrages. Katapathar Barrage, Uttarakhand, Panipat Barrage HR and Agra Barrage, UP are the three new barrages being discussed by respective states govt. Delhi is also discussing a barrage at Palla. The ITO barrage in Delhi is no longer serving any useful purpose and needs to be decommissioned at the earliest.

Major Challenges faced by River Yamuna From the threats point of view River Yamuna can be divided into four segments (mentioned in table-6) and every segment is facing its own different kind of challenges and threats.

Himalayan Segment (Yamnotri Uttarkashi to HKB HR) SANDRP has mentioned in its June 2015 Blog that how built and ongoing dams and hydro projects are biggest threat to River Yamuna in hilly states of Uttarakhand and HP. SANDRP also has highlighted how small hydro projects are playing havoc with the River Yamuna and dependent communities. There is no re-think in govt. policies so far. Moreover, muck dumping from these projects and debris from road construction has increased the river bed level. Shrinking forest areas and receding of glaciers for past few decades have turned many streams run dry, thus reducing the overall water volume flowing in the river. Old human habitations and market areas are fast expanding on river banks and in turn are dumping all solid and liquid waste in River Yamuna and its tributaries. A case of Vikas Nagar, Dehradun is worth mention where the Municipal Council, Vikasnagar  is officially dumping tons of solid waste everyday on River Yamuna banks which is washed downstream during annual floods.

Upper Segment (HKB to WBD) River Yamuna struggles to survive in absence of adequate flow downstream HKB, HR. For next 200 km no key tributary meets the river and illegal sand mining is rampant further aggravating ecological problems. Meanwhile industrial pollution from Yamuna Nagar, Karnal, Panipat & Sonipat the adjoining HR districts is disposed relentlessly in the river by drain number 8 and 6 in turn. Kindly read SANDRP detailed blog on this. The water intensive and chemical farming in the catchment area is also negatively impacting the river. Illegal sand mining has hampered the process of ground water recharge and cultivation of water demanding crops such a poplar, paddy and sugarcane is fast over drafting the shallow aquifers which deprives the river with lean season flow. 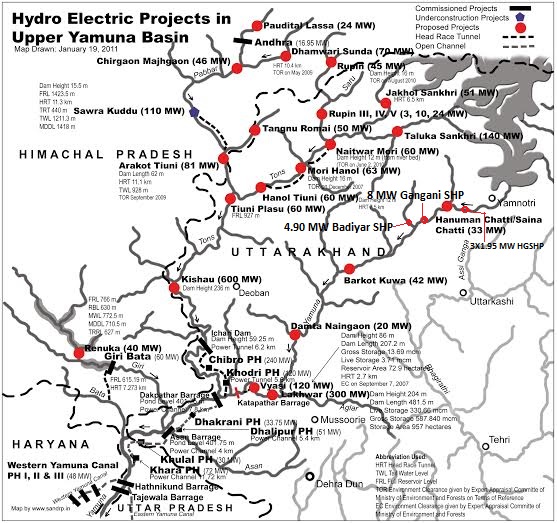 Middle Stretch WBD to Etawah The stretch is about 500 km long and is heavily polluted. After Delhi, downstream cities of Noida, Faridabad, Mathura and Agra dump all sort of industrial and domestic waste water in Yamuna. Moreover many UP districts like Saharanpur, Shamli, Baghpat Gaziabad, Merut etc located in catchment area dispose all their polluted water into Yamuna via Hindon and Karwan Rivers. 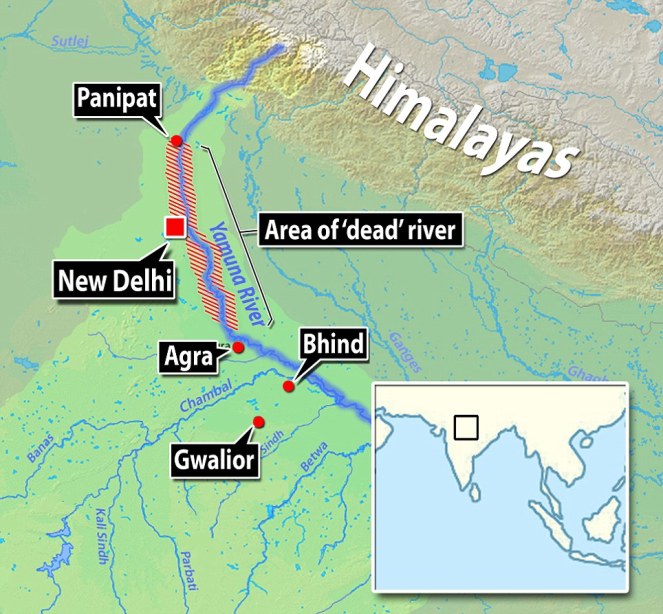 The dry and polluted stretch of River Yamuna

As a result level of pollution in Yamuna River exceeds the permissible level of pollution for Dissolved Oxygen, Biological Oxygen Demand etc and has been declared as most polluted river of India. Delhi with 2% of length causes almost 70% of total pollution to it. According latest report 58% of sewerage the city generates flows untreated in the river. Over Rs 1500 core have been spent through three phases of Yamuna Action Plan (YAP) in spite of that, the level of pollution is only increasing.

Lower Stretch (Etawah to Allahabad) In the about 500 long km stretch number of big tributaries such as Chambal, Sind, Ken, Betwa falls in Yamuna. As a result Dolphins, Ghariyals, Turtles and many fish species are found inhabiting the stretch. However, use of poison and blasting in fishing, sand mining, levelling of ravine areas have started impacting the revived river.

Moreover  ongoing work of 3300 MW Bara and 1980 MW Karchhana thermal power plant in Allahabad district is presenting newer threats to River Yamuna and local people. The power plants are being built by Jaypee Group and Prayagraj Power Generation Company respectively. They will source water from Yamuna River which in summers sustains low flows.  Local people are protesting but the State Govt. is going ahead with the plans. Sources reveal that these power plants would render key lift irrigation projects defunct in turn impacting the livelihoods of over 1 lakh people.

The proposed Ken Betwa River Link, if taken up, will have huge adverse impacts on not only Ken and Betwa rivers, but also on Yamuna. Amid this, one more 2400 MW thermal power plant is planned at Chitrakoot district by Bajaj Power Generation. This project will too source water from Yamuna and in turn render the local lift irrigation project at Bargah village in Mau useless.

Summing up River Yamuna has been elevated to the status of a divine mother for the thousands of countrymen and has been held responsible for nurturing and developing the Indian civilization. Yamuna River is the largest tributary to River Ganga and at the same time the most polluted river of India. Its banks are still inhabited by several religious, mythological places, historical sites all along the course. Despite grossly polluted, it continues to sustain livelihoods of millions of people. Due to dams, hydro and other projects on Yamuna, there has been great loss of aquatic flora and fauna. In the catchment water resources are gradually shrinking. Increased diversion of water to meet the growing demand is costing the river dearly. During lean season the upper segment of the river remains dry. The middle part of the river is heavily polluted and devoid of ecological functions. The level of pollution has in many ways begun to impact the health and livelihood of people living close to or dependent on it. Several pollution control interventions worth 100s of crore of rupees have yielded no result. Most of the tributaries of the river are also suffering from lack of flow and pollution. It is the lower portion of the river which is still much alive and clean. But construction of projects like the Bara, Karchanna super thermal power plants has posed newer threats to even this stretch. The proposed Ken Betwa River Link, if taken up, will have huge adverse impacts on not only Ken and Betwa rivers, but also on Yamuna. Under such circumstances the future of Yamuna remains bleak.