30th September marks the end of June-September South West summer monsoon in India and Maharashtra. The 2015 summer monsoon has proved to be the worst monsoon in the last six years for India. Rainfall deficits are seen in all major food-producing regions like UP (47% deficit), Bihar (28% deficit), Punjab and Haryana (32% deficit). This is India’s second successive year of high rainfall deficit, and only the fourth time this has happened since 1901. 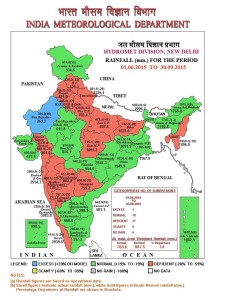 Monsoon retreats from the country and the states on various dates. Some welcome showers are falling and are further expected in Maharashtra in the coming weeks, but the summer monsoon figures are now set. According to meteorologist Akshay Deoras. “Rain counters are refreshed on 1st October and new count of post monsoon season or winter monsoon season will start now.”

First week of October calls for an analysis of the summer monsoon, its performance in June, July, August and September and the implications this holds for various sectors.

People of Maharashtra have heard about, seen and experienced the dismal monsoon of 2015. Marathwada fared the worst, and was number one deficit state in the country at 52% deficit for a long time. However, at the end of monsoon, deficit of Marathwada is 40%. This is more worrisome as it comes piggybacking the 42% rainfall deficit in Marathwada in 2014, with rainfall of just 398.8 mm.

But, in order to understand the situation better, if one tries to analyse rainfall figures from various reputed official sources, one is taken aback by the disparities. We looked at official Indian Meteorological Department[i] figures, official Maharashtra Agriculture Department[ii] (Rainfall Recording and Analysis) figures and numbers from the 49th Cabinet Committee Note of the Government of Maharashtra dated 30th September 2015 accessed by SANDRP[iii]. 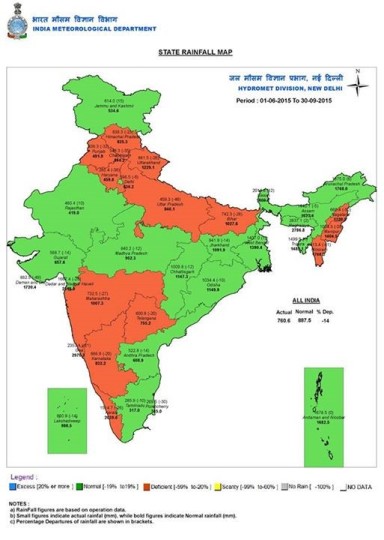 According to IMD, between 1st June to 30th September, Maharashtra has received 732.5 mm rainfall of its 1007.3 mm average normal rainfall, which is 73% of average rainfall (27% deficit).

The region-wise, month-wise rainfall in Maharashtra this monsoon, as per IMD figures was as per following table.

Maharashtra Agriculture Department: Agriculture Department of GoM runs a very useful website:  maharain.gov.in which displays detailed data from its Rainfall Recording and Analysis Department. It states: “The department of Agriculture, Maharashtra State initiated the project for recording daily rainfall in the state in year 1998. Initially rainfall data was recorded at tehsil level and subsequently same functionality was extended to circle level from 2013 as GoM has installed rain gauge at every circle. Circle officer sends daily rain data using mobile through SMS. In addition to SMS rain data can be entered directly on the web portal.”

Prima facie it appears that Agriculture Department may have a better spread in the over 40,000 villages in Maharashtra than IMD’s 878 rain gauging stations.

According to Agriculture Department, of the 353 administrative blocks in the state (taluks):

Agricultural experts like Nishinkant Bhalerao states that the 60% magic figure will make any drought aid difficult and that it masks the monthly disparities which very badly affected this season’s Kharif. For example, Marathwada received barely 14% of its July average rainfall, a mere 28 mm, but cumulatively mainly due to late Spetmeber rains, this anamoly is hidden.

According to the note:

While discrepancies in these sources is not the subject matter of this discussion, there is definitely a need to streamline and improve monsoon rainfall reporting. This is especially important at a time when policies, drought assistance, insurance payment to farmers and water allocation decisions are heavily dependent on rainfall figures. If we cannot get our rainfall figures right, it raises a lot of questions about our capacity to monitor and understand the most important weather event of the year, on which lives of over 50% of the population directly depend! There is a vast difference not only in observed rainfall, but also supposed normal rainfall figures, which skew up the percentages.

Below: Notable differences between IMD and State Govt Data

While IMD states that Maharashtra has received more than 70% average rainfall and State Government pegs it at around 60%, the reality is that water situation in Maharashtra especially Western Maharashtra, Nashik region and Marathwada is dismal. Erratic rainfall with long dry spell in July and August has affected Kharip crops, groundwater levels and surface water storages. There is a need to immediately work on a participatory contingency planning of the available water resources for the coming year.

This planning cannot happen in a closed door manner by the cabinet or group of ministers, but should include and respond to water users and farmers and should be built on the principles of equity and sustainability. MWRRA also needs to get into its act. The people of the state are waiting for such an initiatives from the government and MWRRA.